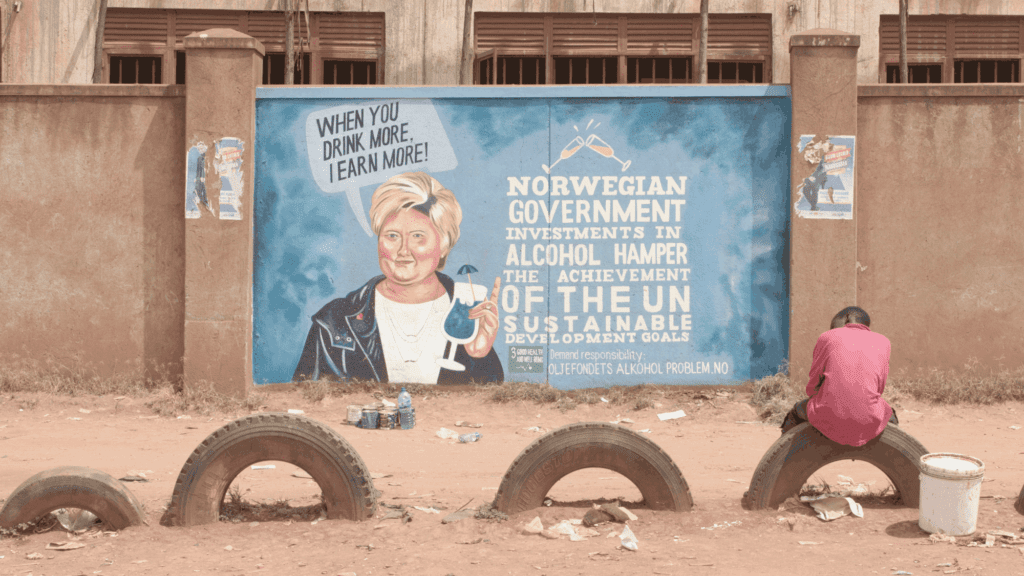 The IOGT movement in Norway is campaigning against the Norwegian Government Pension Fund commonly known as the Oil Fund’s investment in the alcohol industry.

The main elements are advertisements painted on walls in Kampala, Uganda, in the same fashion as alcohol advertisements you find all over the African continent.

These advertisements highlight the message of the campaign: “Norwegian Government investments in alcohol hamper the achievements of the UN sustainable goals” and “Probably not the best investment in the world”.

IOGT International is supporting the campaign, is a collaborator and has called on its members around the world to lend their support to this brilliant initiative from Norway.

Divest from Big Alcohol‼️ We support the new campaign of our Norwegian members @juvente @iogtnorge, their development agency @forutforut and the @blakors 💯 Alcohol is a major obstacle to development adversely affecting 13 of 17 SDGs. But the alcohol industry is pushing their products aggressively-derailing, undermining and obstructing alcohol laws and pushing alcohol marketing everywhere they can, targeting children and youth. Our governments should really NOT help Big Alcohol through “investing” in such an unethical industry. #DivestBigAlcohol #StopCorporateAbuse #healthforall #developmentforall #sustainabledevelopment #lifesetfree #iogt #bigalcoholexposed

The paintings feature the Norwegian Prime Minister, Erna Solberg, and Minister of Finance, Siv Jensen, putting the responsible politicians, if not up against the wall – then up on the wall.

The multifaceted campaign includes other features in addition to the wall paintings such as reports about the adverse effects of alcohol use on development and the SDGs, personal testimonies from people about how alcohol has affected them, as well as videos and pictures for use in social media channels.

The Norwegian Ministry of Finance has on a regular basis transferred capital to the fund from the Norwegian state’s petroleum revenues, hence the name “Oil Fund”. The fund’s capital is invested abroad, to avoid overheating the Norwegian economy and to shield it from the effects of oil price fluctuations.

A review by FORUT of the latest public list of investments (31 December 2018) indicated that at least 86 billion Norwegian kroner (9.8 billion US Dollars) are invested in alcohol producers, most of it in the biggest multinational companies. The ministry determines the fund’s investment strategy, following advice from among others Norges Bank Investment Management and discussions in Parliament.

A few days before the launch of the campaign “Oil fund’s alcohol problem”, another big Norwegian investor, the KLP Pension Fund, announced that they will divest from alcohol. KLP is the largest private pension fund in Norway.

For further reading from the newsfeed:

Alcohol and global health 2018, by FORUT Norway and SERAF (PDF)