A new report by the Substance Abuse and Mental Health Services Administration (SAMHSA) of the U.S. government shows a significant decline in the level of past month (current) underage alcohol consumption, as well as a drop in underage binge alcohol intake. Yet alcohol still remains the most widely used substance of abuse among youths aged 12 to 20…

The survey of 67,000 respondents found that just over 50% of U.S. citizens in 2013 reported being alcohol users while 23% (equivalent to approximately 60 million people) reported being binge alcohol consumers. The study is consistent with the findings of other surveys over the past few years and coincides with campaigns by federal and local governments to reduce underage drinking.

For instance, a study by the University of Michigan from last December found that high school students increasingly make alcohol free choices, with about 75% of seniors disapproving of alcohol use during the weekends.

The U.S. government report is the latest evidence that alcohol might be losing some of its allure for underage youth, defined in the study as 12 to 20 years old. Based on the survey, which involved more than 30,000 people in that age group across the country, there are about 8.7 million underage alcohol users in the United States, and about 5.4 million were binge alcohol users. 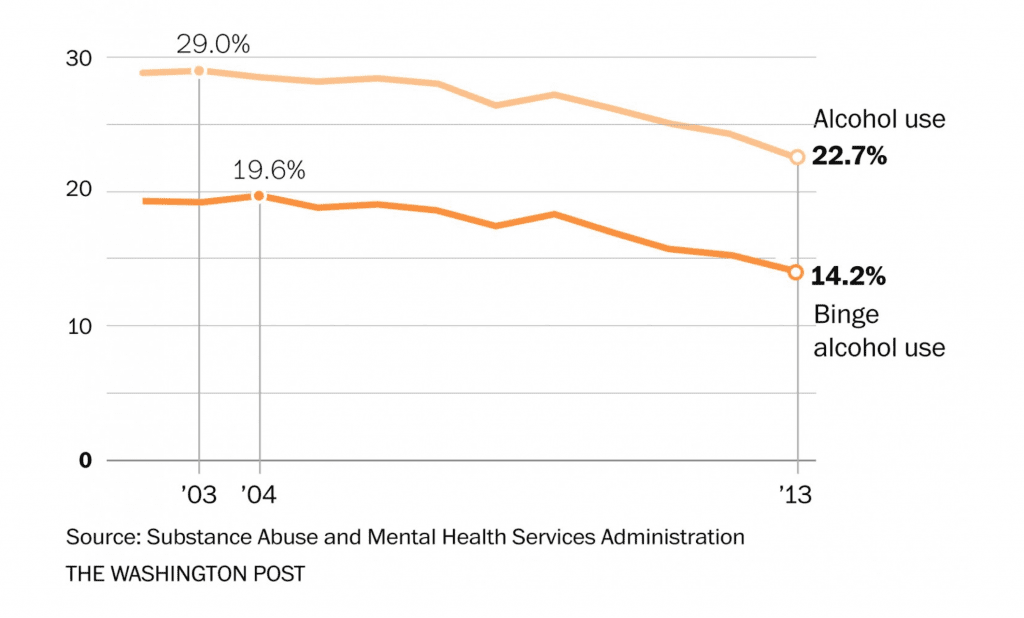 Underage alcohol use in the U.S. is declining

This means that underage alcohol use has been declining from 28.8% to 22.7%. The proportion of binge alcohol users — people who consumed five or more alcohol beverages during one occasion — reportedly decreased from 19.3% to 14.2%, according to the report by the Substance Abuse and Mental Health Services Administration (SAMHSA). Yet alcohol still remains the most widely used substance of abuse among youths aged 12 to 20

The survey also found that alcohol remains the preferred substance of abuse among youths – which continues to pose major health and social problems in the United States.

Evidence shows that underage alcohol use can impede brain development and contribute to incidents such as violence, car crashes and drowning. Alcohol is a factor in the deaths of some 4,300 underage alcohol users every year and in hundreds of thousands of hospital visits, according to the Center for Disease Control (CDC).