A decades-old law preventing product placement of alcoholic beverages in France could soon be repealed, Health Minister Marisol Touraine warned on Tuesday, adding that the country was in “denial” about levels of alcohol harm…

A decades-old law preventing product placement of alcoholic beverages in France could soon be repealed, Health Minister Marisol Touraine warned on Tuesday, adding that the country was in “denial” about levels of alcohol harm. Touraine expressed dismay at efforts by lawmakers from the conservative opposition, as well as from her own ruling Socialist Party, to unravel the so-called Evin Law, which prevents “disguised” advertising of tobacco and alcohol products in the media, and bans alcohol brands from sponsoring sporting events. The Evin Law has been in effect for 25 years and is one of the most high-impact and cost-effective measures in the world to protect children and youth from alcohol advertising.

Last week France’s lower-house National Assembly approved a Senate amendment that would change the Evin Law, allowing the amendment to be attached to an economic reform law that Economy Minister Emmanuel Macron is trying to pilot through parliament.

The current debate is completely crazy. I’m not demanding that the law be stricter, only to leave it alone. And I don’t know if I’ll succeed because the alcohol lobby in France is stronger than the public health lobby,” Touraine told FRANCE 24.

The minister rejected the notion that alcohol advertisement was banned in a country whose image abroad is closely tied with wine production and other distilled beverages.

There isn’t a single magazine out this week that doesn’t feature an article related to wines or other alcohols,” Touraine said, pointing to numerous examples in leading dailies and weeklies. “In France we can definitely talk about, communicate and promote wines.” 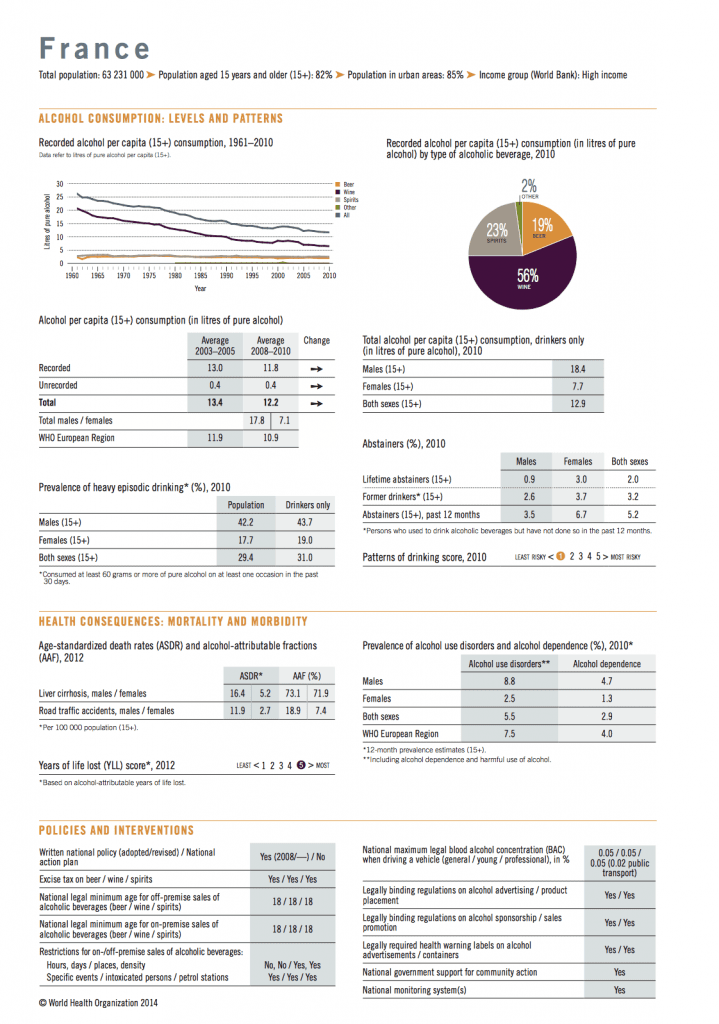 Evidence shows that 50,000 people die of alcohol-related diseases and accidents each year in a country that ranks third in alcohol consumption among the OECD group of industrialised nations. Only Austria and Estonia ranked higher, according to the latest available data from the OECD. With this amount of alcohol use, the consequences are substantial, especially for children and youth, who bear a disproportionate burden of alcohol-related harm:

WHO: Global status report on alcohol and health 2014