The first Regional Status Report on Alcohol and Health in the Americas was released today by the Pan American Health Organization/World Health Organization (PAHO/WHO). The report warns that alcohol use and harm have increased in the Americas over a five-year period and recommends measures to limit availability, restrict marketing, and raise prices of alcohol by increasing taxes…

Regional Status Report Alcohol and Health in the Americas

The report warns that alcohol use and harm have increased in the Americas over a five-year period and recommends measures to limit availability, restrict marketing, and raise prices of alcohol by increasing taxes.

Adding to the problem is the fact that 10% of alcohol users account for more than 40% of all alcohol consumed in the Americas, and the region has on average the second-highest per capita consumption of all WHO regions, after Europe.

An estimated 6% of the region’s population suffers from an alcohol use disorder.

“The increase in problem [alcohol use] can be attributed to the high availability of alcohol in our region’s countries, low prices, and extensive promotion and advertising of alcoholic beverages,” said Maristela Monteiro, PAHO/WHO senior advisor on alcohol and substance abuse.

“Any consumption of alcohol involves a health risk,” she warned, adding that frequent use can lead to dependency.

In the Americas, alcohol was a contributing factor in the deaths of an estimated 300,000 people in 2012, and over 80,000 of these people would not have died if alcohol had not played a role. Alcohol use contributes to over 200 diseases and injuries, including cirrhosis of the liver and some types of cancer. It also makes people more susceptible to, and less likely to adhere to treatment for, infectious diseases such as HIV and TB. It is also the main risk factor in adolescent deaths.

The PAHO report describes levels of consumption of alcoholic beverages and the harms they cause in the Americas and presents recommendations on policies and interventions to reduce consumption, for use by policymakers.

“The Region of the Americas has a long tradition of alcohol production and use.

“The region has been paying a high cost in terms of health, financial resources, and productivity, and these costs will continue to increase if effective measures are not immediately adopted to help promote, protect, and improve the health and well-being of people over commercial interests,” said Anselm Hennis, director of PAHO/WHO’s Department of Noncommunicable Diseases and Mental Health.

However, no countries have fully adopted all these measures.

In the Americas, people consume an average of 8.4 liters of pure alcohol a year. This is 2.2 liters higher than the world average. The region also has the highest proportion of individuals who have consumed alcohol at least once in their life (over 81% of people over age 15).

In 2010, the World Health Assembly approved a global strategy to reduce the harmful use of alcohol, which seeks to reduce the devastating effects of alcohol consumption on individuals, families, and countries’ development. A year later, during the 51st PAHO Directing Council, the ministers of health of the Americas committed themselves to implementing that strategy by approving a plan of action that seeks to reduce per capita levels of consumption and associated harms. The plan of action calls for measures ranging from increased taxes on alcohol sales and restrictions on marketing to training primary healthcare workers on the detection and treatment of drinkers who are at risk.

For further reading, please download the Full Report as well as the Executive Summary: 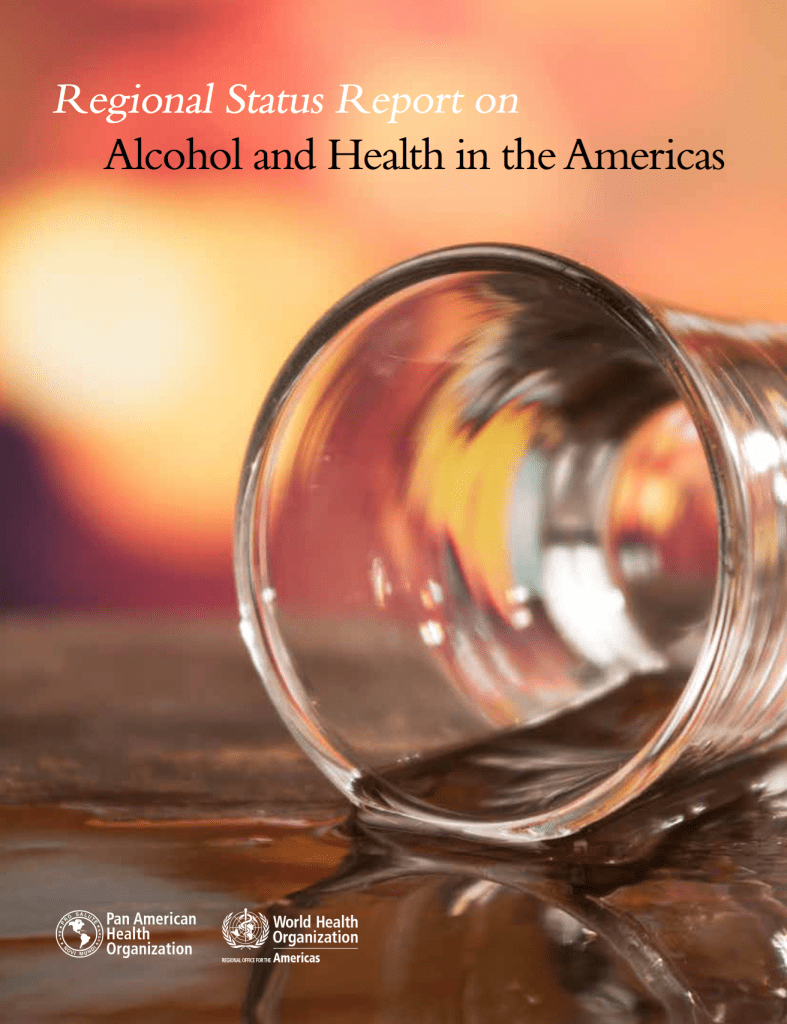 Report Alcohol and Health in the Americas 2015