The United Nations Development Program (UNDP) has released the 2015 Human Development Report. The report is entitled: Work for human development, and calls for equitable and decent work for all. In doing so, it encourages governments to look beyond jobs to consider the many kinds of work, such as unpaid care, voluntary, or creative work that are important for human development. The report suggests that only by taking such a broad view can the benefits of work be truly harnessed for sustainable development…

The United Nations Development Program (UNDP) has released the 2015 Human Development Report. The report is entitled: Work for human development, and calls for equitable and decent work for all. In doing so, it encourages governments to look beyond jobs to consider the many kinds of work, such as unpaid care, voluntary, or creative work that are important for human development. The report suggests that only by taking such a broad view can the benefits of work be truly harnessed for sustainable development.

Fast technological progress, deepening globalization, aging societies and environmental challenges are rapidly transforming what work means today and how it is performed. This new world of work presents great opportunities for some, but also profound challenges for others.

Decent work contributes to both the richness of economies and the richness of human lives. All countries need to respond to the challenges in the new world of work and seize opportunities to improve lives and livelihoods.”

With better health and education outcomes and reductions in extreme poverty, 2 billion people have moved out of low human development levels in the last 25 years, the report says. Yet in order to secure these gains and galvanize progress, a stronger focus on decent work is needed.

Human progress will accelerate when everyone who wants to work has the opportunity to do so under decent circumstances. Yet in many countries, people are often excluded from paid work, or are paid less than others for doing work of the same value”, said report lead author Selim Jahan.

Women do three out of every four hours of unpaid work

The report presents a detailed new estimate of the share of all work, not just paid work, between men and women. While women carry out 52 percent of all global work, glaring inequalities in the distribution of work remain.

Women are less likely to be paid for their work than men, with three out of every four hours of unpaid work carried out by women. In contrast, men account for two of every three hours of paid work. Since women often carry the burden of providing care services for family members, the report warns that this disparity is likely to increase as populations age.

When women are paid, they earn globally, on average, 24 percent less than men, and occupy less than a quarter of senior business positions worldwide.

Highly skilled workers and those with access to technology, including to the internet, have new opportunities in the types of work available and the way that work is done.Today, there are seven billion mobile phone subscriptions, 2.3 billion people with smart phones, and 3.2 billion with internet access. This has brought about many changes in the world of work – for example, the rise of e-commerce and the mass outsourcing of banking, ICT-support, and other services.

Despite new opportunities, however, more jobs are now becoming vulnerable and a wide digital divide remains, the report notes.

Many types of routine work, such as clerical jobs, are predicted to disappear or be replaced by computers, or have already disappeared, the report warns, while many more workers face other insecurities. According to the International Labour Organization, 61 percent of employed people in the world work without a contract, and only 27 percent of the world’s population is covered by comprehensive social protection.

The report calls on governments to formulate national employment strategies that take into account the many challenges emerging in the rapidly changing world of work. Sustainable work, opportunities both for present and future generations Public Health Workers in Liberia. The report therefore proposes a three-pronged action agenda:

Work, not just jobs or employment, is crucial for human progress: Of the world’s 7.3 billion people, 3.2 billion are in jobs, and many others engage in unpaid care, creative and voluntary work as well as other activities or prepare themselves as future workers.

The 2015 Human Development Report ‘Work for Human Development’ examines the links, both positive and negative, between work and human development in a rapidly changing world of work. Fast globalization, technological revolution, demographic transitions and many other factors are creating new opportunities, but also posing risks. The report examines how the benefits of this new world of work are not equally distributed, generating winners and losers.

The report argues for a broader notion of work, one that goes beyond the jobs framework, to confront both persistent challenges such as human deprivations, inequalities, unsustainability, and gender imbalances in paid and unpaid work – as well as emerging ones –erosion of jobs, skills gaps, climate change and others. It concludes with a series of policy recommendations on how to enhance human progress through promotion of workers’ rights and broader access to social protection. 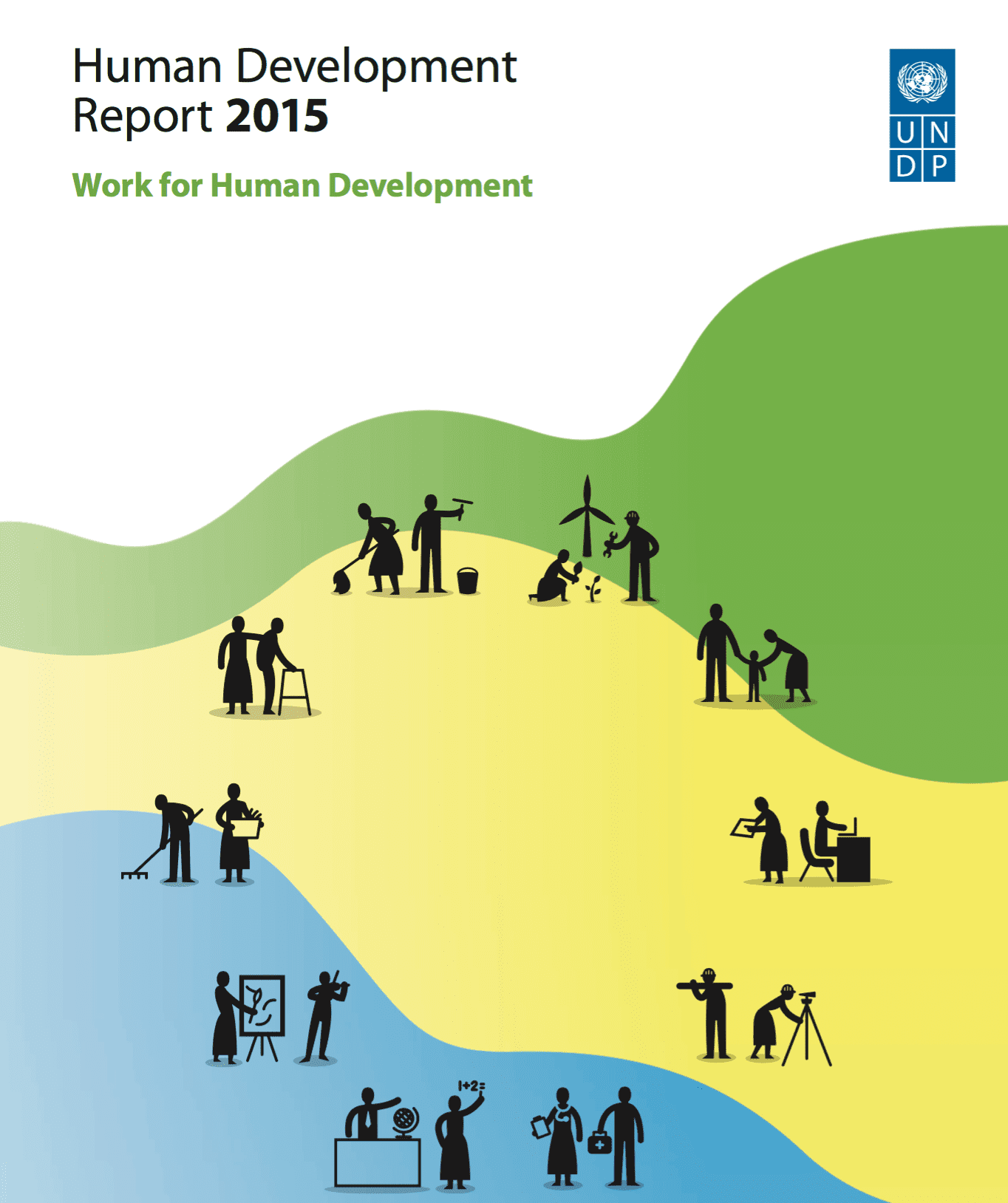 Helen Clark speech at the release of the report

UNDP partners with people at all levels of society to help build nations that can withstand crisis, and drive and sustain the kind of growth that improves the quality of life for everyone. On the ground in more than 170 countries and territories, we offer global perspective and local insight to help empower lives and build resilient nations.