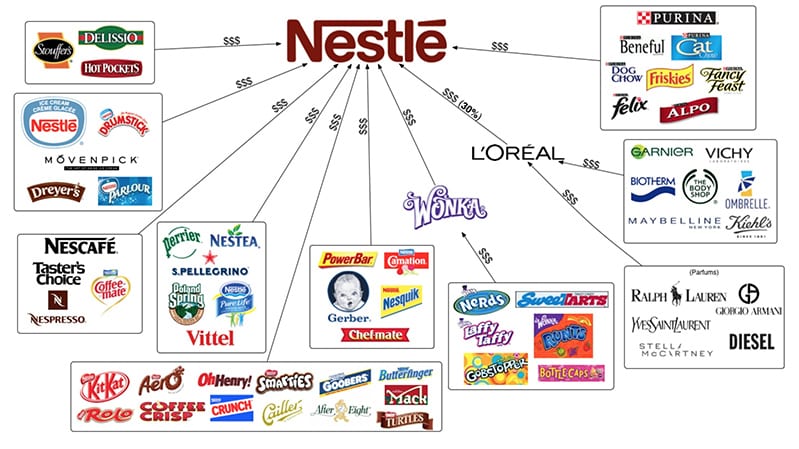 In a Bloomberg article Campbell and Greeter write:

Nestlé’s impact on the history of how we eat is almost impossible to overstate.”

Nestlé is the largest food company in the world measured by revenues and was ranked number 72 on the Fortune Global 500 in 2014.

The Nestlé food and drink empire, including San Pellegrino water and Stouffer’s frozen dinners, is built on a foundation of sugar. Butterfinger, Cookie Crisp, KitKat, and Oh Henry! are all Nestlé products. So are Drumstick sundae cones, Häagen-Dazs ice cream, and Nesquik chocolate milk. In 1988, Nestlé even bought the life-imitates-art candy brand that makes Laffy Taffy and Nerds: Willy Wonka.”

Since 2012, however, sales in confectionery business dropped every year. Also the sales of Nestlé’s competitors are falling. The question is whether Big Food will become the next Big Tobacco?

And Big Food corporations, such as PepsiCo, Coca-Cola or Mondelez International are frantically trying to adjust – producing hummus, gluten-free products, or reducing the size of cans.

Nestlé, on the other side, is taking a radically different approach – an approach that lays bare their profit hunger. Campbell and Greeter write:

It wants to invent and sell medicine. The products Nestlé wants to create would be based on ingredients derived from food and delivered as an appealing snack, not a pill, drawing on the company’s expertise in the dark arts of engineering food for looks, taste, and texture. Some would require a prescription, some would be over-the-counter, and some are already on store shelves today.”

Selling unhealthy products and selling products that should treat the harmful effects of those products – a genius and ruthless business model. It’s an approach that illustrates the tactics and ideology of the corporate consumption complex.