Millions of people are not benefiting from progress, with the gap set to widen unless deep-rooted development barriers, including discrimination and unequal political participation, are tackled…

World’s most marginalized still left behind by global development priorities, according to new UNDP report

Millions of people are not benefiting from progress, with the gap set to widen unless deep-rooted development barriers, including discrimination and unequal political participation, are tackled.

A quarter-century of impressive human development progress continues to leave many people behind, with systemic, often unmeasured, barriers to catching up. A stronger focus on those excluded and on actions to dismantle these barriers is urgently needed to ensure sustainable human development for all.

One in three humans live in low level development

The report finds that although average human development improved significantly across all regions from 1990 to 2015, one in three people worldwide continue to live in low levels of human development, as measured by the Human Development Index.

Leaving no one behind needs to become the way we operate as a global community. In order to overcome the barriers that hamper both human development and progress towards the Sustainable Development Goals, inclusiveness must guide policy choices,” said Swedish Prime Minister Stefan Löfven, speaking at the launch of the report in Stockholm.

The world has come a long way in rolling back extreme poverty, in improving access to education, health and sanitation, and in expanding possibilities for women and girls,” said UNDP Administrator Helen Clark.

But those gains are a prelude to the next, possibly tougher challenge, to ensure the benefits of global progress reach everyone.”

This is a concern in developed countries too, where poverty and exclusion are also a challenge, with over 300 million people – including more than one-third of all children – living in relative poverty.

Systemic discrimination against women, indigenous peoples and ethnic minorities, among others

The report notes that not only are deprivations high, but disadvantages disproportionately affect some groups.

We place too much attention on national averages, which often mask enormous variations in people’s lives,” stated Selim Jahan, the report’s lead author and Director of the Human Development Report Office.

In order to advance, we need to examine more closely not just what has been achieved, but also who has been excluded and why.”

The report shows that in almost every country, several groups face disadvantages that often overlap and reinforce each other, increasing vulnerability, widening the progress gap across generations, and making it harder to catch up as the world moves on.

Women and girls, rural dwellers, indigenous peoples, ethnic minorities, people with disabilities, migrants and refugees, and the LGBTI community are among those systematically excluded by barriers that are not purely economic, but political, social and cultural as well.

In the case of women, the largest of these groups, the report notes that while global gender disparities are narrowing slowly, longstanding patters of exclusion and lack of empowerment for women and girls remain pressing challenges.

Women tend to be poorer, earn less, and have fewer opportunities in most aspects of life than men. In 100 countries, women are legally excluded from some jobs because of their gender, and in 18 countries, women need their husband’s approval to work. Dangerous practices like female genital mutilation and forced marriage continue.

Moreover, migrants and refugees often face barriers to work, education and political participation and more than 250 million people in the world face discrimination on the basis of their ethnicity, the report notes among other examples.

Time to face up to deep-rooted barriers to development

By eliminating deep, persistent, discriminatory social norms and laws, and addressing the unequal access to political participation, which have hindered progress for so many, poverty can be eradicated and a peaceful, just, and sustainable development can be achieved for all,” Helen Clark said.

Marginalized groups often have limited opportunities to influence the institutions and policies that determine their lives. Changing this is central to breaking the vicious circle of exclusion and deprivation.

For example, indigenous peoples account for 5% of the world’s population, but 15% of people living in poverty. And members of the LGBTI community cannot actively advocate for their rights when same-sex acts between men are illegal in more than 70 countries.

The report calls for far greater attention to empowering the most marginalized in society, and recognizes the importance of giving them greater voice in decision-making processes.

The report stresses the importance of the 2030 Agenda for Sustainable Development to build on these gains, noting that the agenda and human development approach are mutually reinforcing.

The report includes recommendations to reorient policies to ensure progress reaches those furthest behind, and urges reforms of global markets and global institutions to make them more equitable and representative.

Unfortunately, these recommendations neither address evidence-based alcohol policy measures nor Noncommunicable diseases. In fact, the report does not mention alcohol at all, despite the fact that alcohol is an obstacle to achieving 12 out of 17 Sustainable Development Goals, and a causal factor in exposing vulnerable groups at risk.

Evidence shows that alcohol-related harm is a major contributor to inequality, ill-health and under-development – disproportionately affecting deprived communities and vulnerable groups, such as women, children, or the LGBTI community. 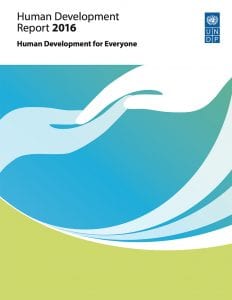 “Human Development For Everyone“