The Parliament of the Republic of Lithuania (Seimas) adopted amendments to the Law on Alcohol on June 1, 2017. The new alcohol policy measures raise the legal age for alcohol use, restrict hours of alcohol sales and ban alcohol advertising…

The Parliament of the Republic of Lithuania (Seimas) adopted amendments to the Law on Alcohol on June 1, 2017. The new alcohol policy measures raise the legal age for alcohol use, restrict hours of alcohol sales and ban alcohol advertising.

According to latest figures from the World Health Organisation, Lithuania – a country of 2.8 million inhabitants – is the world’s heaviest alcohol consuming country with no signs of a downward trend. In 2016, Lithuanians consumed, on average, the equivalent of 18.2 liters of pure alcohol per person, which means an increase compared to the already high levels of consumption (14.9 liters per capita per year) ten years ago. 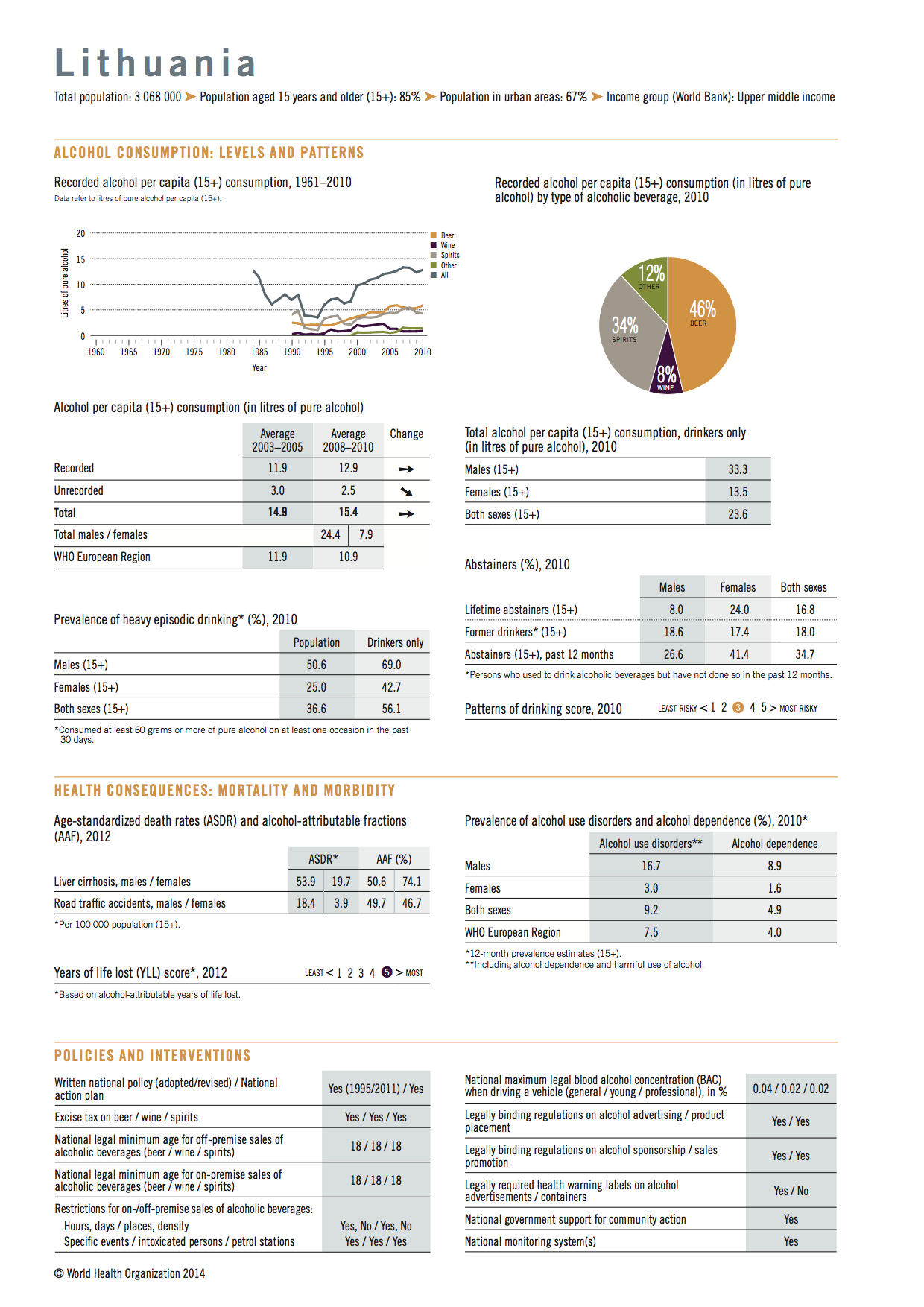 We came to the situation that society was quite regularly faced with shocking events”, says Minister of Health Aurelijus Veryga, in an interview with The Guardian.

Children killed on the roads by drunk police driving cars. Children murdered by drunk parents. Society has reached the level where it became unsafe for all of us. It isn’t just about consumption by capita, which is generating all the discussion.”

Lithuania’s coalition government, consisting of the Peasant and Greens Union and the Social Democrats, introduced evidence-based and high-impact legislation to amend the existing alcohol control law in order to turn the tide on alcohol harm.

To tackle alcohol harm in the country was among the key campaign promises made by the Lithuanian Peasants and Greens Union (LPGU) which won a surprise victory in the elections in October 2016.

We need changes so that fewer people become dependent on alcohol and kids are not affected by this industry,” said LPGU party chairman Ramunas Karbauskis.

The 141-seat parliament passed the measures with a strong majority of 101 members for, ten against and ten abstaining.

Independent scientific evidence shows that there are three best buys for alcohol policy – measures that are well based in evidence, cost-effective and high-impact. These best buys are measures regulating affordability, availability and marketing of alcohol.

The ban on sales of alcohol between 8pm and 10am, as well as the increase of the legal age for alcohol consumption to 20 years (from 18 years of age) are such availability measures that are cost-effective and high-impact in reducing alcohol use and related harm.

The ban on alcohol advertising is another such measure. It will include billboards, TV, radio, the printed press and the internet, and is set to come into force on January 1, 2018.

It is also worth noting that The Seimas rejected some additional measures proposed: requiring individuals in public to transport and store alcoholic beverages in non-transparent packaging; and special alcohol consumption zones, which people below the age of 20 would not be allowed to enter during public events where rejected.