Posted on June 25, 2017 in
IOGT, Obstacle To Development, Sustainable Development

Alcohol adversely impacts 13 of 17 Sustainable Development Goals (SDGs) and 52 out of the 169 targets that make up the 2030 Agenda. Additionally, alcohol negatively affects all three dimension of sustainable development: the social, environmental and economic dimension are all affected through alcohol’s pervasive public health, social and economic harms.
This shows a newly updated analysis into the links of the 2030 Agenda and alcohol-related harm, made by IOGT International…

*This news has been updated on December 4, 2019, in line with the release of an upgraded booklet, now comprising 14 adversely affected SDGs.

Alcohol adversely impacts 13 of 17 Sustainable Development Goals (SDGs) and 52 out of the 169 targets that make up the 2030 Agenda. Additionally, alcohol negatively affects all three dimension of sustainable development: the social, environmental and economic dimension are all affected through alcohol’s pervasive public health, social and economic harms.

This shows a newly updated analysis into the links of the 2030 Agenda and alcohol-related harm, made by IOGT International.

The analysis shows that alcohol, through its multiple Human Rights, public health, social and economic impacts, is a massive obstacle to all dimensions of sustainable development. As a psychoactive, addictive, toxic, carcinogenic, and teratogen substance, alcohol kills 3.3 million people worldwide every year, representing 5.9 % of all deaths.

Among the population that is typically the most productive at work and most active in their communities, alcohol is the number one risk factor for premature death and disability. It means that alcohol harm erodes societies’ investments in educating, empowering youth to become engaged citizens and productive members of the workforce.

Negative effects on all dimensions of development

Notably, alcohol adversely affects the social, environmental and the economic dimensions, cutting across all aspect of sustainable development.

With regard to poverty, alcohol can push people into deprivation and lock them, their families and entire communities in poverty over generations. The direct costs of alcohol harm to the household are often considerable and frequently underestimated.

With regard to the production, distribution, marketing, retail and consumption of alcohol, evidence shows that humanity is not protecting scarce water and food resource; is not consuming responsibly and is not regulating the alcohol industry in a sustainable and environmentally friendly way.

Alcohol production is a threat to water security in many regions of the world:

With regard to economic prosperity and productivity, both on the macro and micro levels alcohol harm is a drag on socio-economic development. The costs of alcohol harm have been measured in different regions and are of massive scale:

Also on the micro level, the burden to development is substantial: Alcohol use disorders likely result in billions of dollars of lost wages each year. And alcohol is a significant risk factor for absenteeism and presenteeism at work, largely in a dose response manner, with a relationship between societal and individual level of alcohol consumption and sickness absence.

Solutions are at hand 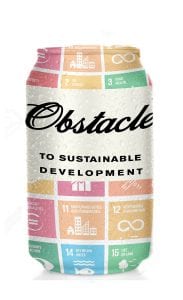 The analysis – presented in the booklet “Alcohol and the Sustainable Development Goals. Major obstacle to development” – shows that alcohol is a cross-cutting risk factor impacting the entire 2030 Agenda, not just health or addiction.

Therefore, addressing alcohol with evidence-based, cost-effective policy measures holds the potential to reap benefits for better outcomes across the SDGs. And the policy tools are at hand, examined by independent science and tested in different countries and regions. They are called policy best buys: reducing affordability, decreasing availability and banning alcohol advertising and sponsorship. Among these, alcohol taxation is especially promising.

The countless victims of alcohol harm have important stories to tell, stories about the various aspects of how alcohol adversely effects individuals, families, communities, societies and the planet as a whole. From my own work, I know that these stories are important, said Kristina Sperkova, International President of IOGT International.

They fill the data, the facts and figures with life. Not every story contains a solution though; not every anecdote can be generalized. But they can all speak to the reality that what we are dealing with is not a minor issue on the margins of society, affecting a select few.”