Diageo is implicated in government investigations in both France and the United Kingdom for alleged tax schemes. The recent suspicions are part of a long track record of tax irregularities and tax avoidance schemes…

Diageo is implicated in government investigations in both France and the United Kingdom for alleged tax schemes. The recent suspicions are part of a long track record of tax irregularities and tax avoidance schemes.

Diageo, the fourth biggest alcohol producer globally and the second largest liquor producer in the world, is embroiled in a row with the France’s tax authorities. The French government is accusing Diageo of not paying enough corporation tax on its earnings in the country.

At issue is the amount of debt interest Diageo has booked through its French subsidiary – payments that reduced its tax liabilities. The French government “intends to deny tax relief for certain interest costs”, Diageo informed its shareholders in the 2017 annual report.

The new French government alleges that Diageo’s way of dealing with debt interest was illegal and plans to impose a back tax on the company.

The news about the alleged tax avoidance scheme in France comes just months after the multinational corporation was ordered to pay £107m by the UK tax authority as part of a long-running investigation into moving profit between its global businesses.

In 2015, the diverted profits tax regime came into force with the purpose of preventing tax avoidance by multinationals through imposing a 25% charge on taxable profits judged to have been artificially diverted from the UK. It was swiftly dubbed the “Google tax”.

The BBC reports, the HM Revenue & Customs (HMRC) dispute centers around profits that Diageo shifted between the UK and an offshoot in the Netherlands, where Diageo employs 220 people.

Diageo reports to its shareholders that it will pay the additional tax and interest of £107m for 2015 and 2016 up front and would then work to resolve the matter with HMRC over the next 12 months. A resolution is not expected until the third quarter of next year. The firm will not make a provision to cover the payment.

The Guardian reports that Diageo’s UK tax charge was £95m in 2016, but the multinational corporation may have paid less if one-off items were deducted. Diageo did not disclose the actual tax paid.

There has been a clampdown on tax avoidance by multinationals in Europe by national governments and the EU commission, the executive arm of the European Union.

A simple google search for “Diageo tax” automatically offers the search term “Diageo tax evasion” and the results are telling. 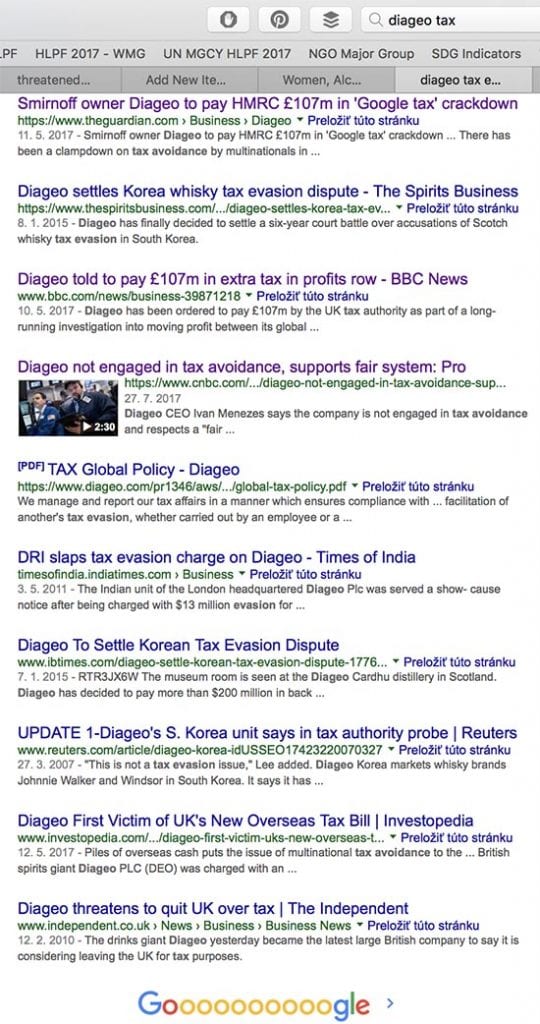 The United States Securities and Exchange Commission (SEC) charged Diageo plc with violations of the U.S. Foreign Corrupt Practices Act’s (FCPA) books and records and internal controls provisions in connection with US$2.7 million in improper payments allegedly made through its subsidiaries in India, Thailand and South Korea to obtain sales and tax benefits relating to its Johnnie Walker and Windsor Scotch whiskeys, among other brands.

Bribery and tax scheme in India

From 2003 to mid-2009, over US$1.7 million in improper payments were allegedly made to hundreds of Indian government officials who were responsible for purchasing or authorizing the sale of Diageo’s products in the country. Diageo earned more than US$11 million in profits as a result of the increased sales resulting from these payments.

In South Korea, Diageo allegedly paid over 100 million won (over US$86,000) to a customs official as a reward for his role in the government’s decision to grant significant tax rebates to the company.

Diageo also allegedly paid over US$100,000 in travel and entertainment expenses for South Korean customs and other officials involved in the tax negotiations.

Separately, the multinational routinely made hundreds of gift payments, totaling US$230,000, to South Korean military officials in order to obtain and retain liquor business at military canteens.

Previously, in 2009, South Korean authorities prosecuted several Diageo employees for bribery and tax evasion in connection with the conduct at issue in South Korea.

On July 27, 2011, without admitting or denying the SEC’s findings, Diageo consented to the entry of a cease- and-desist order prohibiting the company from future violations of the FCPA’s books and records and internal controls provisions. Diageo agreed to pay US$11,306,081 in disgorgement, a prejudgment interest of US$2,067,739, as well as a US$3 million civil penalty.

The multinational corporation allegedly obtained the following business advantage: Tax rebates worth US$50 million, along with increased sales.

Bribery and tax schemes in Thailand

From 2004 to mid-2008, Diageo allegedly paid approximately US$12,000 per month (totaling nearly US$600,000) to retain the consulting services of a Thai government and political party official who lobbied other high-ranking Thai officials extensively on the company’s behalf regarding pending multi-million dollar tax and customs disputes.

This lobbying contributed to Diageo’s receipt of certain favorable decisions by the Thai government.