The Foundation for Alcohol Research and Education’s submission to the Northern Territory Alcohol Review has exposed how the alcohol industry undermined and attacked scientific evidence in an attempt to mislead the inquiry.
Public health experts say alcohol industry submissions to the review “conspire to undermine science by merchandising doubt in a manner straight out the tobacco industry’s playbook”…

The Foundation for Alcohol Research and Education’s (FARE) submission to the Northern Territory Alcohol Review has exposed how the alcohol industry undermined and attacked scientific evidence in an attempt to mislead the inquiry.

Public health experts say alcohol industry submissions to the review “conspire to undermine science by merchandising doubt in a manner straight out the tobacco industry’s playbook”.

What we are seeing in the Northern Territory from the alcohol industry is a pattern of lying and denying; a concerted effort by the likes of Woolworths and Alcohol Beverages Australia to cast doubt on scientific evidence in order to defeat life-saving policy solutions, in favour of their profit margins,” Michael Thorn from FARE said. 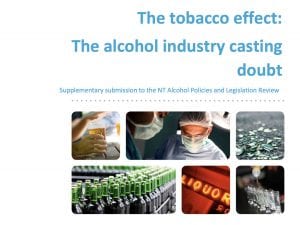 FARE’s supplementary submission to the review, The Tobacco effect: The alcohol industry casting doubt, exposes those industry tactics and sets the record straight.

The Northern Territory (abbreviated as NT) is a federal Australian territory in the central and central northern regions of Australia. In the NT, alcohol is a significant cause of trauma and crime as well as a major risk factor for violence. Therefore, the NT Government has launched a comprehensive public review of the its alcohol policies and legislation, including the Liquor Act, in order to develop an evidence-based overarching alcohol policy framework.

FARE has analyzed the alcohol industry’s submissions and approach to the NT Alcohol Policies and Legislation Review. The analysis shows that Big Alcohol has borrowed heavily from the big tobacco playbook.

Industry submissions from Brewers Association – with members such as Carlton & United Breweries that is owned by the SABMiller group and as such belongs to the world’s biggest beer producer Anheuser-Busch InBev – and Woolworths’ Australian Leisure and Hospitality Group (ALH) attempted to cast doubt on the evidence of alcohol pricing.

For example, the Brewers Association claimed: “Evidence demonstrates that price controls are ineffective at targeting the harmful consumption of alcohol, and instead reduce overall per capita consumption levels.”

Similarly, the ALH Group made the claim that: “Taxation changes or a minimum (floor) price are inefficient and inequitable method of addressing alcohol-related harm which would impact on moderate and responsible drinkers…”

Mr Thorn says alcohol-pricing policies are in fact recognised as one of the most effective measures to reduce harmful consumption.

What we are seeing is an attempt to cast doubt and uncertainty, in the face of undisputed evidence.

It is cost effective and successful in reducing consumption and consequent harms in targeted groups such as risky drinkers and young people,” Mr Thorn said.

Attacking the science and scientists

To the contrary, the research, which found that big box liquor stores were statistically associated with an increased occurrence of intentional and unintentional injuries, has in fact been published by two scientific peer reviewed journals, Addiction, and Drug and Alcohol Review.

Mr Thorn says the alcohol industry is desperate to resist government regulation, and will undermine the science and the scientists to do so.

The alcohol industry is critiquing research that is not disputed, spreading doubt when the evidence is clear, manufacturing false debate, attacking legitimate science and scientists, and creating lavish, industry-funded disinformation campaigns.

The alcohol industry is threatened by the introduction of policy measures that would save lives but also impact their bottom lines.

And in response we see them double down, lying and denying the evidence before them and wining and dining politicians and public officials in order to oppose public regulation, at any cost,” Mr Thorn said.