Already in 2013, practices of bribing rebel groups in war-torn Congo were brought to light, coining the term “blood beer”.

The book “Heineken in Africa” details stories of tax evasion by Heineken subsidiary Ibecor, stories which have evoked questions in both Dutch and European parliaments.

Heineken is also exposed working with dictators to “relax” their “tax burden” in African countries.

Heineken recently had to cancel a marketing campaign for light beer amid a social media backlash that culminated in Chance The Rapper, a Grammy winning hip-hop artist, calling out the brewer for deliberate racism to attract attention and sell more beer, as the New York Times reported.

In a statement provided to NPR, Heineken admitted it “missed the mark” but did not respond to a question about whether the ad was purposefully racist.

To stimulate beer sales, Heineken uses beer girls in ten African countries. The promotional girls speak of being confronted with unwanted intimacies during their work.

Our employer thinks: if you do not want to be groped, you have to look for another job.”

The girls are also pressured into having intercourse with their managers, without payment. Some of these girls are prostitutes at the same time, and they use the beer promotion to get in touch with customers. A former employee of Heineken in Nigeria, who is familiar with the problem, confirms that this is happening.

Even at events organized by Nigerian Breweries, young promotional girls are hired and often the same thing happens: sex is regarded as a transaction in Nigeria, also at Heineken.”

Appalling 18 years after the first reports of abuses came to light, Heineken is to this date using young women and their bodies to boost beer sales and the profits of a few shareholders and executives.

It is a marketing strategy to sexualize beer,” says Nigerian researcher Dumbili.

It confirms beer drinking as a male, heterosexual activity.”

The brewer acknowledges – in response to this story in NRC Handelsblad – that sexual harassment “deserves more attention than it has received from us and other stakeholders in recent years.”

These findings (and more) are presented in a new book “Beer for Africa; the Best Kept Secret of Heineken” written and researched by Olivier van Beemen. Download van Beemen’s news brief here.

Evidence from South-East Asia shows that this method of using beer girls has been going for decades, promises of improvements for the women’s workplace safety and health situation had been made, but it is still common and pervasive that beer girls are exposed to threats, forced alcohol consumption, harassment and sexual abuse, as well as too low wages so that they are forced to sell sex to survive.

In 2003 an investigative report detailed that beer girls

… wear tight dresses with the colours and logos of Heineken…  The number of HIV infections is high because sometimes an evening of beer drinking ends in unprotected sex with customers. Heineken is jointly responsible, according to Lubek [a Canadian psychologist]”

An ILO report from 2006 entitled “Cambodia’s ‘Beer Promotion Girls’ their recruitment, working conditions and vulnerabilities” implicated Heineken and outlined among other aspects:

Beer promotion, in addition to billboards and spots on television, is an approach that has been taken by companies and distributors to generate greater sales.

Only women are employed and they are based in various restaurants and beer gardens, creating sales by requesting clients to buy the brand they are endorsing. While the clients are in the restaurant, they talk with them, make sure they have what they in need in terms of food and drinks. They regularly pour the beer even in half-full glasses, as a way to make clients drink more, and accomplish repeat orders.

The report also stated that the conditions of employment are making workers vulnerable, such as: 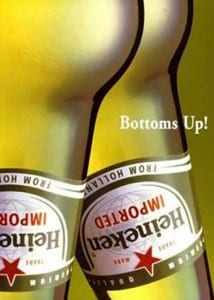 For example, the survey found that 85% of all respondents reported suffering from a health problem, the most common of which were fever, dizziness, and headaches.

Respondents also recounted ailments in form of stomach pains, and ulcers with varying intensities and durations, possibly arising from irregular meals or excessive consumption of alcohol.

Awareness regarding STI and HIV/AIDS transmission and prevention is high, judging by the respondents who correctly identified infection routes and how these can be prevented, at 74% and 95% of the total respectively.

Heineken has a track record of sexualizing and objectifying women in their marketing.

In 2017, Heineken and former workers in Democratic Republic of Congo reached an agreement on labour rights dispute through OECD complaint mechanism. In October 2015, 168 workers previously employed by Heineken’s Congolese subsidiary, Bralima, filed a complaint with Dutch National Contact Point (NCP) alleging unlawful dismissals from 1999 – 2003. The complainants alleged that Bralima collaborated with the rebel movement RCD-GOMA, instead of obtaining authorization from the DRC Ministry of Labour to proceed with massive dismissals for economic reasons. Heineken is said to have colluded with rebels and exploited workers. The agreement is confidential.

Also since 2017, the Nigerian unit of Heineken N.V. is under police investigation after a former supplier complained to the government, according to Bloomberg reports.

Heineken is trying to recruit new consumers and brand-loyal customers with ruthless marketing campaigns – four examples indicate the unethical practices of the company.

Heineken is fuelling a beer marketing war in Ivory Coast between Heineken-owned Brassivoire and Castel-owned Solibra is putting children and youth in harms way through massive and pervasive marketing campaigns.

In fall 2016, some 20.5 million students are expected to attend American colleges and universities, constituting an increase of about 5.2 million since fall 2000, according to the National Center for Education Statistics. The percentage of 18-to 24-year-olds enrolled in college also was higher in 2014 (40.0%) than in 2000 (35.5%). In the United States, the legal age for alcohol consumption is 21.

Nevertheless, Heineken subsidiary Dos Equis has released a new Snapchat filter as part of a wider push onto the field of College Football Playoff (CFP) marketing. Heineken and Dos Equis are overseeing a sweepstake to win tickets for the national championships by taking the most interesting pictures with its Snapchat filters and lenses in an extension of its ‘Most Interesting Man in the World’ campaign.

The Big Alcohol Exposed campaign documents the massive exposure of children to alcohol brand messaging during the UEFA Champions League Final. The match took place on May 28, 2016 in Stadio San Siro, Milano and went into extra time. Over the time of the match, Heineken beer brands surrounded the entire pitch on regular intervals – culminating in moments of eternal exposure, when the beer brand is visible during TV broadcasting of the first goal…

The brewer promotes lying, calling it “embellish their stories to keep friends entertained and engaged during nights out”.

The spot rolled out across the US and is supported by social media, digital, retail and out-of-home activations.

Encouraging people to be telling lies to keep conversations with friends interesting is highly questionable, put sheds light on Heineken’s problematic relation to the truth.

For example, Abraham Lincoln regarded sobriety as a noble cause and important contribution to achieving political freedom.