Posted on May 29, 2018 in
IOGT, Obstacle To Development, Policy, Research, Sustainable Development

In a new Lancet Comment, IOGT International President Kristina Sperkova has joined colleagues from other leading institutions and global health leaders in calling for a more integrated approach and action on sugar, tobacco and alcohol taxes (STAX) to achieve the Sustainable Development Goals…

In a new Lancet Comment, IOGT International President Kristina Sperkova has joined colleagues from other leading institutions and global health leaders in calling for a more integrated approach and action on sugar, tobacco and alcohol taxes (STAX) to achieve the Sustainable Development Goals.

… despite their potential, taxes on sugar, tobacco, and alcohol are underused by policymakers…

STAX should top the list of recommendations from this year’s World Health Organization’s Independent High-Level Commission on Non–Communicable Diseases and the G7 Summit in Canada.”

The 26 authors of the article include experts from the World Health Organization (WHO), UNICEF, the World Bank, UNAIDS and United Nations Development Programme (UNDP) as well as civil society leaders and other academics.

Worldwide, tobacco is estimated to kill more than seven million people and alcohol more than three million people each year. The global number of young people aged 5–19 years who are overweight and/or obese has increased from 11 million in 1975 to 124 million in 2016, with sugar consumption being a major contributor.

For example, when Finland reduced taxes on alcohol in 2003, alcohol-related mortality increased by 16% among men and by 31% among women.

IOGT International together with the East African Alcohol Policy Alliance had released a report in 2015 already showing the vast and untapped potential in alcohol taxation for boosting sustainable development. The report presented evidence about the … of alcohol taxation.

The latest WHO estimates indicate that if all countries increased tobacco taxes by 50% tax revenue would increase by US$101 billion globally.

For alcohol the revenue generating potential could be even bigger because excise taxes on alcohol products tend to be lower than on tobacco products in most countries.”

Compared with tobacco taxation, the potential for domestic resource mobilization through alcohol taxation could be even bigger since taxes on alcohol tend to be lower in most countries.

A study of 42 high-, middle- and low-income countries found that raising excise duties on alcohol to at least 40% of the total retail price would increase tax revenue in these countries by 80% to US$ 77 Billion. Expressed as a proportion of total current spending on health, it is low-income countries that have most to gain (additional receipts would amount to 38% of total current spending on health).

Alcohol taxation is a triple win measure. It helps reduce alcohol consumption and related harm; it promotes health and development; and it helps raise domestic resources. 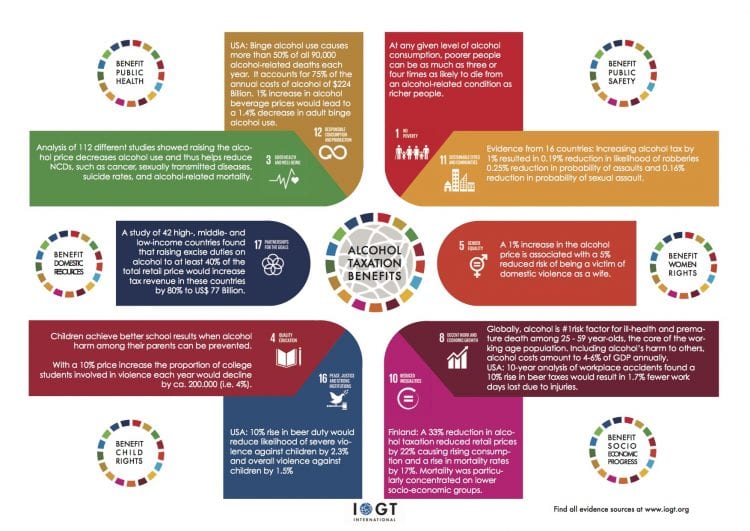 The experts of the STAX group write that

… as part of a broader public health approach to promote a life-course approach to prevention and to address commercial determinants of health, it is now time for governments to adopt sugar, tobacco, and alcohol taxes (STAX)…”

The Comment also highlights that STAX could mitigate risk factors for health and NCDs that disproportionately affect people with low socioeconomic status and low-income countries, but existing efforts are inconsistently applied, and “scaled-up country support is needed to accelerate and implement STAX as a cost-effective fiscal policy to contribute to the Sustainable Development Goals.”

STAX are not a magic bullet but instead are indispensable policy tools to improve public health, save millions of lives, and generate resources to invest in health, nutrition, and other development priorities.”

Members of the Sugar, Tobacco, and Alcohol Taxes (STAX) Group are: