WHO: Global Safety Conferences recognizes alcohol as leading cause of accidents, injuries, violence, harm and calls for WHO to be role model in promoting health…

Injuries and violence are a major public health burden across the globe. The 13th World Conference on Injury Prevention and Safety Promotion (Safety 2018) brought together over 1000 of the world’s leading researchers, practitioners, policy-makers and activists to share information and experiences and to discuss solutions, under the overarching theme “Advancing injury and violence prevention towards SDGs”.

The conference, shortly called “Safety 2018”, took place in Bangkok, Thailand, between November 5-7. It was co-hosted by the World Health Organization, Thailand’s Ministry of Health, the Thai Health Promotion Foundation and the National Institute for Emergency Medicine.

Alcohol not included in draft declaration

Surprisingly and shockingly, alcohol was not included in the draft declaration as it was introduced in the closing session. Journalist Julie Power reports from the conference, writing:

In nearly every session at the three-day conference, alcohol was shown to increase risk of violence, injury and death whether it was on the roads or on the beaches or in the home.”

The latest WHO Global Status Report on Alcohol also compiles latest evidence of alcohol’s link to accidents, injuries, violence and other harm. Therefore it was puzzling, surprising and shocking to many conference participants, that alcohol was not included in the draft declaration. The conference declaration is a tradition at each and every Safety conference.

But in a last-minute intervention from conference participants the critical addition was proposed, calling for health experts to include alcohol as a leading cause of harm. The following text was eventually inserted:

The Conference recognizes that harmful use of alcohol contributes to all types of injury, violence and NCDs, causing significant morbidity and economic losses. This burden can be minimized by stronger alcohol policies and cross-cutting alcohol harm reduction strategies.

WHO conferences to be role models for health promotion

Beyond addressing alcohol as major risk factor for numerous safety issues, the declaration text was further amended with a text calling for WHO events not to promote alcohol use to help shape positive societal norms. The following text was added to the declaration:

Similarly the Conference requests WHO as a health promotion institution and role model, considering introducing a policy that ‘health conferences or meetings organized by WHO, exclude support for alcoholic beverages’. This policy will shape a positive societal norm towards supporting health and serve a precedent for WHO Member States.” 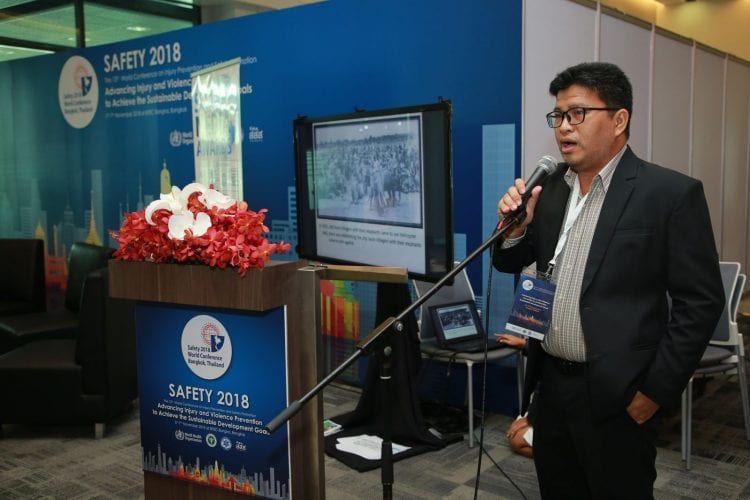 This amendment is the result of advocacy from conference participants as well as co-organizers in reaction to plans for a social event called “Networking reception hosted by Bloomberg Philanthropies”. Despite consensus among the international organizing committee that “all social events at the conference will be alcohol-free events” plans had surfaced that the Bloomberg event would provide alcohol to participants. This would have prevented many participants and co-organizers from being able to attend that “social event”. Local participants, including IOGT International’s Member Organization Stop Drink Network, addressed this issue through news articles, asking Bloomberg and WHO to be better role models for health. Eventually, the event was held alcohol-free, which can be regarded as another advocacy success on the ground.