The multinational beer giant Heineken, the second largest beer producer in the world, has a long history of unethical marketing campaigns. Dutch newspaper NRC reports the latest marketing stunt that transgresses ethical boundaries comes from the Democratic Republic of Congo where Heineken-owned brand Primus launched a billboard campaign that glorifies war.
The gigantic billboards, many of them near roads, depict fighters lifting a rifle into the air. The Swahili caption reads: “This is our beauty.”…

The gigantic billboards, many of them near roads, depict fighters lifting a rifle into the air. The Swahili caption reads: “This is our beauty.”

These billboards are part of a regional campaign that, according to Heineken, shows characteristic images of the cities of Bukavu, Goma and Kisangani. 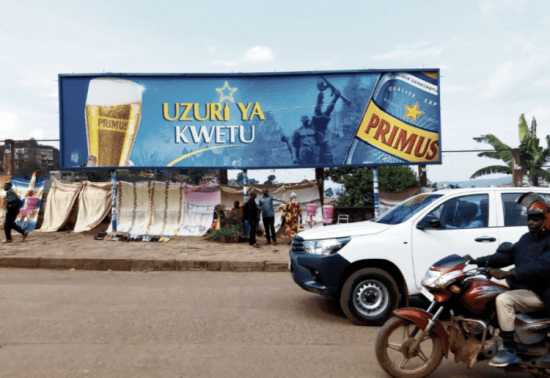 The DRC has been plagued by war, conflict and poverty for decades Just last month new fights erupted following controversial elections. The DRC is a country on the brink of collapse. However, beer (Heineken owned brands) is available everywhere. Heineken itself has a troubling track record in the country, collaborating with rebel groups, the military and alleged corruption.

Investigative journalist Olivier van Beemen revealed in his book “Heineken in Africa. A multinational unleashed” that the beer giant had an agreement with a rebel group guilty of massacres, mass rape and looting.

In such a context, the latest Heineken campaign is macabre.

That Heineken – whether or not consciously – makes a connection between its own beer and violence, can be called remarkable, especially in this region in Central Africa,” writes van Beemen in NRC.

Beer by Heineken played an important role in 1994 during the genocide in Rwanda.

Perpetrators were often drunk during their actions and beer was used as a reward after a day of murder. Heineken is also controversial in nearby Burundi. The repressive regime depends largely on the taxes that the brewer pays for his survival. The chairman of Heineken in Burundi is also  the chairman of the Constitutional Court, one of the most important judges of the country.”

As the NRC reports, Heineken claims in a statement that the poster appeals to “feelings of national pride”. Van Beemen writes that Heineken commented via a spokesperson:

An ordinary passer-by sees this as a glorification of war and violence. The woman with pigeon is not clearly visible, the raised Kalashnikov and the torch are. The flame represents unity, but also martyrdom.

Heineken apparently wants to say that Primus is the beer for fighters and martyrs. I find that very problematic and advise the company to withdraw from this campaign.

This statue does not evoke feelings of national pride from anyone. Why do not they opt for a nice aerial view of our city on Lake Kivu? That is our beauty. We are proud of it.”

However, contradicting its initial assessment that the marketing campaign was no big deal, Heineken announced the day after van Beemen published his story that the beer giant will in fact remove the unethical billboards, per NRC reporting.

Heineken officially apologized for the advertising, issuing the following reaction:

The billboard for the Primus brand is not appropriate and not in accordance with the marketing guidelines of Heineken and we apologize for this.

Heineken has decided to no longer use this poster and the photo of the image of independence from now on.”

Unfortunately, in the meantime people are still exposed to the macabre billboard. The beer giant promised to remove the billboards as quickly as possible, but predicts it will take several days.