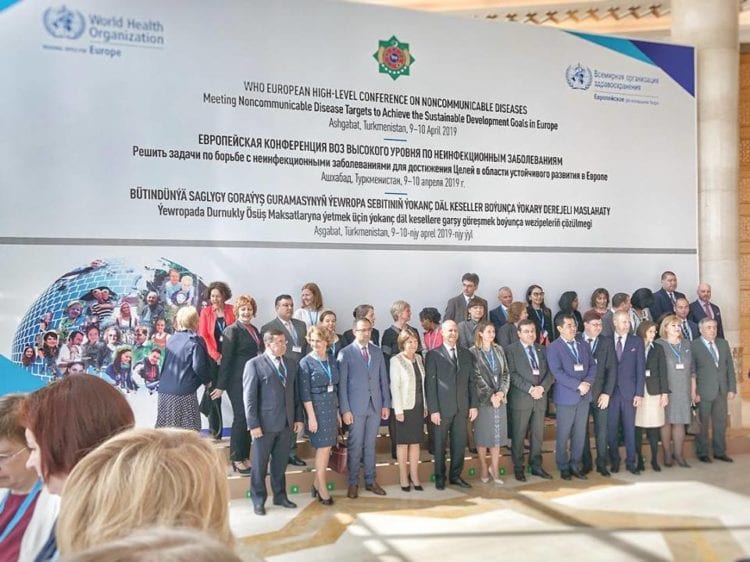 WHO Europe: Calls for Stronger Action to Reduce NCD Deaths

WHO European High-level Conference on Noncommunicable Diseases which took place in Ashgabat, Turkmenistan, on 9–10 April 2019, focused on achieving target 3.4 “reducing premature deaths from NCDs” of the Sustainable Development Goals (SDGs).

WHO “best buys” – targeted policy interventions aimed at reducing the burden of noncommunicable diseases (NCDs) – can be a game-changer for achieving target 3.4 of the SDGs. The interventions range from policies that promote physical activity and curb tobacco and alcohol consumption, to reducing salt and sugar and eliminating trans-fats in food.

NCDs are the leading cause of death in the Region, and pose a massive barrier to economic and social development.

While Europe is the only WHO region in the world where premature deaths from NCDs are decreasing fast enough currently to meet the target, it is also where the highest rates of alcohol and tobacco consumption are found globally.

Many more lives could be saved by implementing the WHO best buys. Countries have these effective policies at their fingertips yet implementation is sadly lacking,” said Dr. Zsuzsanna Jakab, WHO Regional Director for Europe, as per WHO Europe.

NCDs – such as mental ill-health, cardiovascular disease, cancer, chronic obstructive pulmonary diseases and diabetes – account for nearly 90% of deaths and 84% of ill-health in Europe. This increases the strain on the well-being of the population, health systems, and the overall economic development of the Region, as well as fuelling inequity. The NCDs burden continues to rise disproportionately in low- and lower-middle-income countries.

Our President @kristin_sperkova is in Turkmenistan 🇹🇲 these days to participate in and speak at the @whoeurope high-level conference on #NCDs #heartdriven Kristina is representing the expertise of IOGT International members in how to build partnerships in support of Alcohol Policy formulation and implementation. And to explain why “partnerships” with the alcohol industry do not work in promoting health and development for all. #bigalcoholexposed #iogt #beatncds #enoughncds #cdoh #healthforall #developmentforall #healthpromotion #pivot2prevention #alcpol

Closing the divide between NCD rates in eastern and western parts of the Region will reduce premature mortality rates significantly overall and reduce inequities.

The best buys are measures which are known to curb rates of disability and death from NCDs.

By implementing these interventions, countries can hope to close the health divide in Europe and achieve SDG 3.4 to reduce premature deaths from NCDs by 33% by 2030,” said Dr. Bente Mikkelsen, Director of the Division of Noncommunicable Diseases and Promoting Health through the Life-course, as per WHO Europe.

Directly from Ashgabat, 🇹🇲 @kristin_sperkova spoke on behalf of our members at the panel about “Achieving the alcohol-related targets by 2025 and 2030: the value of partnerships for improving country implementation of evidence-based policies” 🚨 She talked about which partnerships work and do not work ✅ Exposed the alcohol industry 💯 Highlighted some successful countries and approaches to partnerships for alcohol control 🙌🏾 #AlcPol #iogt #beatncds #bigalcoholexposed #lifesetfree

IOGT International President Kristina Sperkova attended the conference sharing the expertise of IOGT International members in building partnerships in support of alcohol policy formulation and implementation. Speaking to the panel on “Achieving the alcohol-related targets by 2025 and 2030: the value of partnerships for improving country implementation of evidence-based policies,” she explained how “partnerships” with Big Alcohol are not effective in promoting health and development for all. She further shared what kind of partnerships are effective, highlighting several countries and successful approaches to partnerships for alcohol control.