Commencing on September 2, 2019, the public health ministry will be consulted over any complaint made regarding alcohol advertising in Belgium. The aim is to give the interests of public health more of a say in advertising decisions. An additional change is that all advertisements for alcohol must first be cleared by a jury for so called ethical advertising practices, which normally only steps in later when a complaint is made. For companies who repeatedly fail to respect these self-regulatory codes, fines could be as high as €10,000.

Insufficient from a public health perspective

A clear indication of the failure of the self-regulatory system so far is the admission that public health had no say in deciding about alcohol advertising complaints. In Belgium, the alcohol industry was violating its own codes of conduct, only to be assessed upon complaints and by an industry-associated body, while their ads had been aired and reached their target groups.

The new agreement appears to be a superficial improvement but remains extremely insufficient. Self-regulatory practices are systematically violated by the alcohol industry, as evidence shows. The persisting lack of statutory regulations and truly independent oversight of alcohol marketing is a win for Big Alcohol and a loss for public health and child rights protections.

Current rules stipulate that alcohol advertising must not be targeted at young people, or encourage over-consumption. The protection of minors is a major concern of the rules, which were officially adopted by the government and industry in 2005, and extended in 2013. The need for improvements to these rules clearly shows their inadequacy. 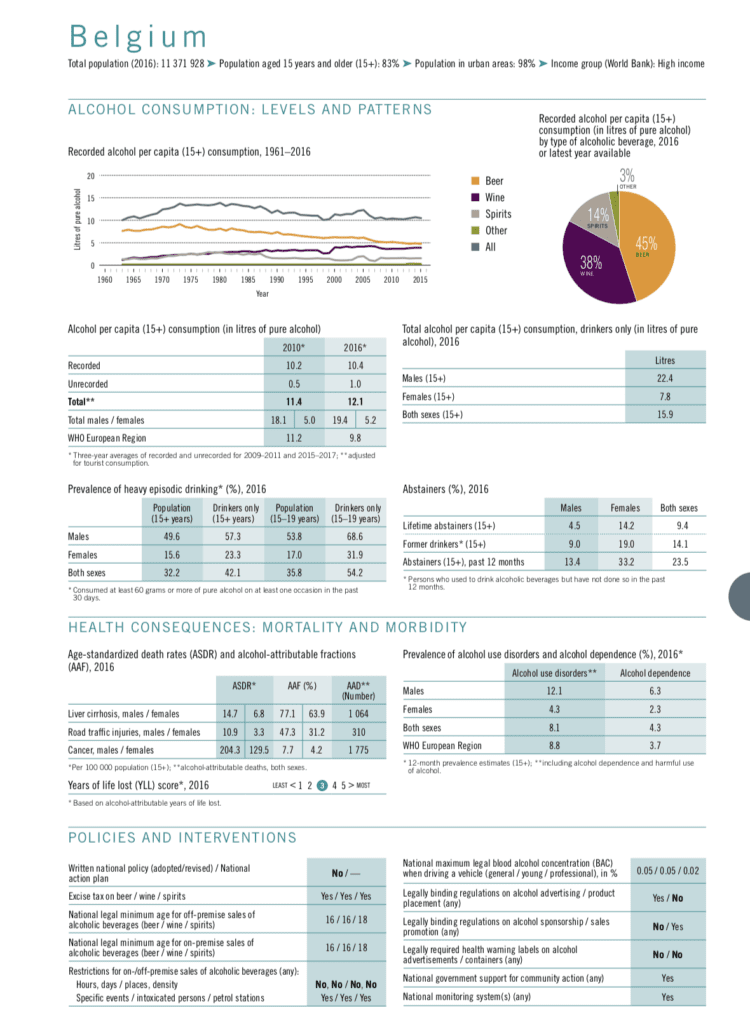 Evidence from the World Health Organization clearly shows that per capita alcohol consumption of alcohol users is worryingly high. In addition, more than half of all all 15 to 19 years olds are engaging in binge alcohol consumption. And more than 40% of all adult alcohol users are bingeing on alcohol. The rate of alcohol dependence in Belgium is higher than the WHO European region average.

Analysis also shows that the Belgium government is not up to task to protect its population from these pervasive alcohol harms. The country has no written national alcohol policy. The legal age for alcohol purchases is also on the lowest end country rules. Alcohol is widely available in the country and physical availability largely unregulated. While there is a legally binding alcohol advertising regulation, it does not include product placement, and sponsorship.

However, the WHO recommends:

Bans and comprehensive restrictions on alcohol advertising, sponsorship and promotion are impactful and cost-effective measures to prevent and reduce alcohol harm. Enacting and enforcing such bans or comprehensive restrictions in the digital world will bring public health benefits and help protect children, adolescents and abstainers from the pressure to start consuming alcohol.”

Implementing and enforcing bans or comprehensive restrictions on alcohol advertising, sponsorship, and promotion is part of the WHO alcohol policy best buy package, called SAFER.

The Regulation of Alcohol Marketing: From Research to Public Health Policy