In Canada the biggest harm for health is caused by alcohol, not opioids. Despite the fact that opioid harm gets a  lot of attention, alcohol kills many more people each year (14,800 in 2014).  There are more hospitalizations due to alcohol annually than heart attacks. Alcohol is one of the most expensive and intractable health problems in Canada.

The Canadian Institute for Substance Use Research and the Centre for Addiction are calling for stronger regulations to mitigate the costs and harms of alcohol use and addiction. The two institutes recommend the following in a recent report: 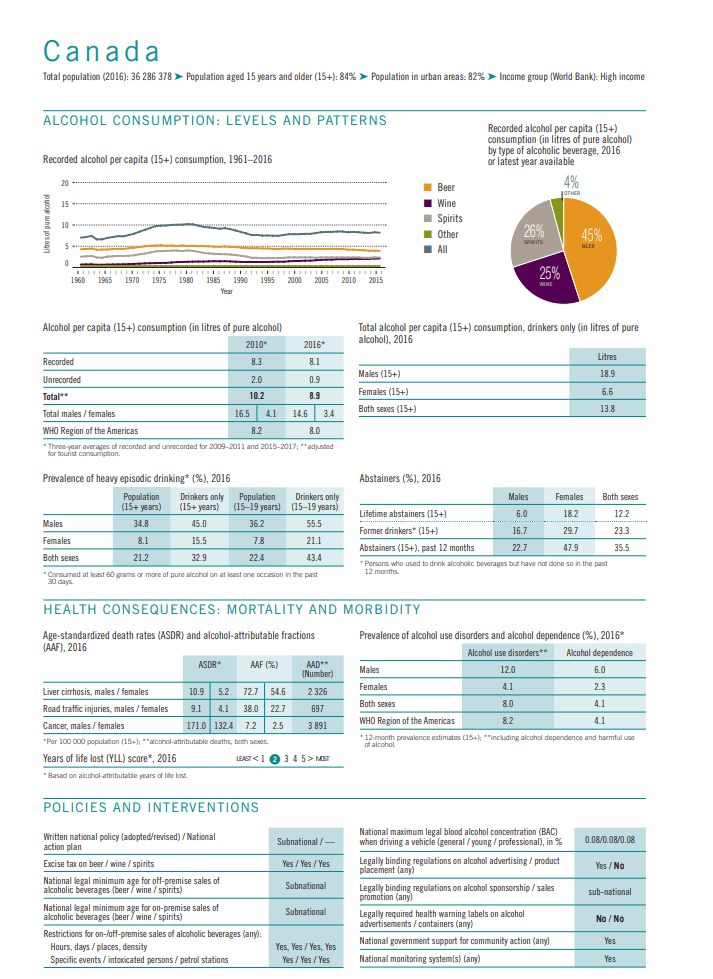 As WHO reports, the per capita consumption of alcohol in Canada is comparatively higher than for the WHO Americas region. A significant number of youth who use alcohol between 15 to 19 years (43.4%) engage in binge alcohol use. 12% Canadian men suffer from alcohol use disorders, which is above the average for the region.

Over the past decades, the researchers found an erosion of effective policies and regulations.

…customer convenience and choice are being given priority over health and safety concerns … the responsibility of governments to warn citizens of potential risks is largely absent,” states the report by the Canadian Institute for Substance Use Research and the Centre for Addiction, as per Journal Pioneer.

The University of Washington’s Global Burden of Diseases Study last summer found alcohol was the leading factor in 2.8 million premature deaths in 2016 and is so harmful that governments ought to be advising people to abstain completely.

Canadian governments may have misguided priorities in looking at revenues from the alcohol industry, ignoring its health harms and costs.

Alcohol is no ordinary commodity. As it causes greater harm, researchers suggest, alcohol should not be sold alongside food and other groceries. Journal Pioneer reports, research done last year by the Canadian Institute for Substance Use Research found that when access to alcohol is easier, more people die. This study estimated rates of alcohol-related deaths increased by 3.25% for each 20% increase in stores density.

No federal or provincial policies exist to specifically prevent and reduce alcohol’s harms and costs, despite the evidence suggesting the extent of the problem. Canada urgently needs to implement strong alcohol control policies and adhere to recommendations by public health experts to reduce the pervasive alcohol harm in the country.

Concurrent Mental And Substance Use Disorders In Canada