Posted on May 14, 2019 in
Alcohol's Harm To Others, Democracy, Human Rights, Lifestyle, Policy, Research, Research

A recent study reports, the burden of alcohol in India cost the economy more than what the government spends on health.The study has found that after adjusting for tax receipts from alcohol sale, the economic loss from adverse effects of alcohol consumption would touch about 1.45% of the gross domestic product (GDP). For comparison, the government’s annual expenditure on health is about 1.1% of the GDP.

A recent study reports, the burden of alcohol in India costs the economy more than the entire spending on health by the Indian government.

The study, recently published in the International Journal of Drug Policy, has found that after adjusting for tax receipts from the alcohol sale, the economic loss from adverse effects of alcohol consumption is about 1.45% of the gross domestic product (GDP). For comparison, the government’s annual expenditure on health is about 1.1% of the GDP.

The researchers predict the gross societal economic burden of alcohol-related health conditions by 2050 would be $3,228 billion, or more than India’s entire GDP in 2018. 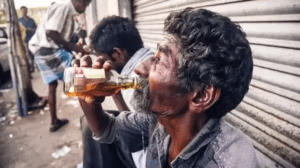 The statistics were obtained by calculating the likely direct and indirect costs of three health conditions linked to alcohol consumption — liver disease, cancers and road traffic accidents. The study assumed an alcohol prevalence rate of 30% in men and 1.5% among women, as indicated by the latest National Family Health Survey, and took into account the proportions of the alcohol users likely to face the three health conditions.

Measuring the treatment costs, productivity losses when alcohol users in economically productive ages suffered the health conditions, and years lost through premature deaths it was estimated that alcohol-related deaths would lead to a loss of 258 million life-years between 2011 and 2050.

These costs are without including social consequences of alcohol use such as household discord or violence which can also lead to productivity losses.

Many states view alcohol as a source of revenue. Unfortunately, in India, the consequences of alcohol [harm] have largely no economic consequences for the government because people largely bear the economic burden for treatment,” said Rajesh Kumar, head of community medicine at PGMIER, a member of the research team.

Researchers call for stronger action to curb alcohol harm in India. The recommendations are: