11 out of 26 alcohol producing companies have not yet complied with the Ugandan government’s ban on production and sale of alcohol in sachets.
The alcohol industry in Uganda has not only failed to fully comply with the alcohol sachet ban (production and sale), it also uses the opportunities to engage with the ministry of trade to lobby against evidence-based and WHO recommended alcohol policy measures (SAFER package), like the recently instituted alcohol tax…

11 out of 26 alcohol producing companies have not yet complied with the Ugandan government’s ban on production and sale of alcohol in sachets.

News came already in late 2016 that sachet alcohol would be banned, when the government issued a directive giving alcohol manufacturers until September 2017 to stop production of alcohol in sachets or face the consequences of the law.

Ministry of trade under the influence of Big Alcohol

After the September 2017 Directive, the minister of trade was seen and heard in June 2018 announcing a new directive for 2019 to ban sachet alcohol, at the opening of a new alcohol glass packing facility of Uganda Breweries, a subsidiary of alcohol giant Diageo.

Since 2017, after the issuance of the cabinet directive, the The Ministry of Trade appears to be heavily influenced by Big Alcohol, including Diageo, the second largest liquor producer worldwide. In unusual joint meetings with the alcohol industry, held under the umbrella of the Uganda Alcohol Industry Association (UAIA) the ministry of trade and the alcohol industry agreed on a road map to procure, install and commission new bottling packaging production equipment including building new factory premises for new technology bottling machinery. This process has now taken more than two years and has purportedly attracted several investments for bottling equipment to enable the transition.

At the time, the trade minister was heard saying:

This means that the production and packaging of alcohol should transit from packaging in sachets to packaging and sale in plastic and glass bottles, 200mls minimum,” she said.

However, even after the government had issued the alcohol effective from March 31, 2019 at factory premises, almost half of alcohol producer still are not complying with the law. It is clear that the alcohol industry has abused the extensive and improper heavy engagement with Big Alcohol.

The alcohol industry in Uganda has not only failed to fully comply with the alcohol sachet ban (production and sale), it also uses the opportunities to engage with the ministry of trade to lobby against evidence-based and WHO recommended alcohol policy measures (SAFER package), like the recently instituted alcohol tax.

The way this entire process has played with engaging the alcohol industry so closely and yet falling way short of the long announced alcohol sachet ban, instead using these engagement opportunities to lobby against other important alcohol policy measures leaves the ministry of trade embarrassed, and shows the nature of the alcohol industry.

The alcohol industry representatives claim that about 50% of alcohol in Africa is illicit due to high taxation – even as they continue to fail to stop producing and selling sachet alcohol. Such a claim is far from WHO evidence that shows that alcohol taxation is a triple win measure for health, development and government revenue and that current levels of taxation are by far too low to prevent and reduce alcohol harm effectively.

Recently, a high-level task force released their report about the potential of health promotion taxation levied on tobacco, alcohol and sugar-sweetened beverages. They found:

… the impact of these taxes, projected to yield over US$20 trillion in revenue, would be highest in low- and middle-income countries, where consumption and associated healthcare costs and productivity losses are growing.”

Alcohol harm is pervasive in Uganda, largely to government failure to protect the people from rampant harm, including informal alcohol, interpersonal and gender-based violence, road traffic injuries and fatalities, workplace accidents and absenteeism due to alcohol, disease, alcohol-fueled poverty and hunger and neglect and abuse of children and youth. 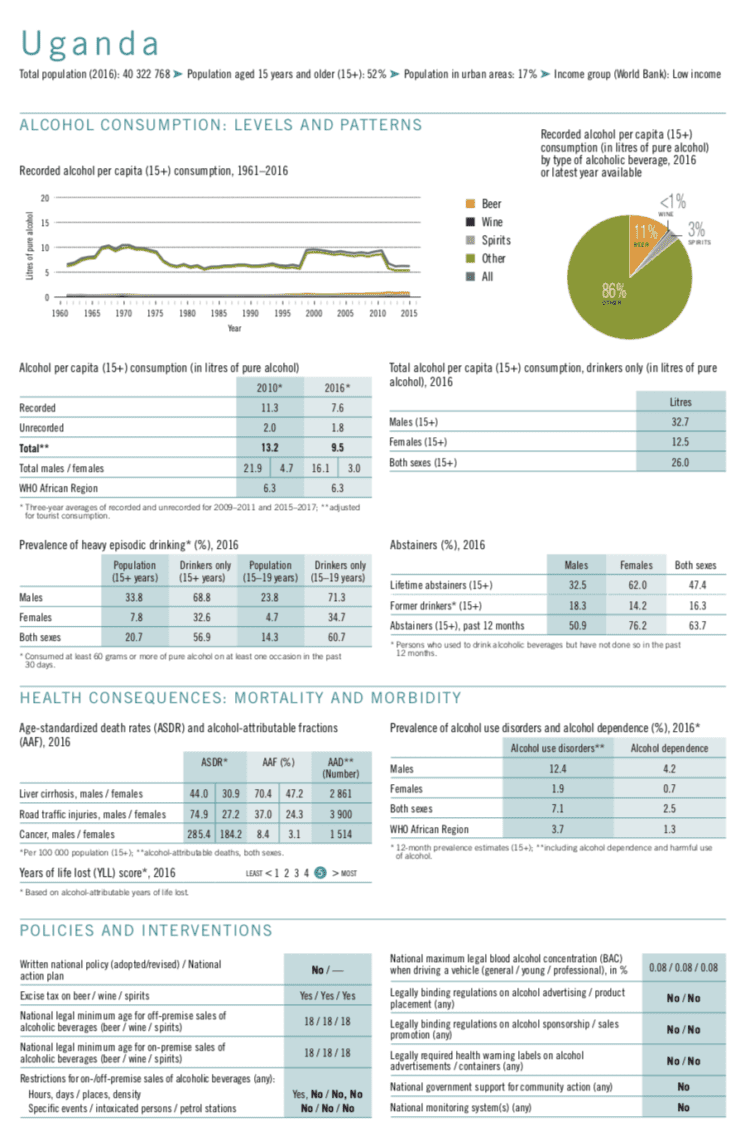 Latest data from the 2018 WHO Global Alcohol Status report clearly shows that Uganda ranks high for years of lives lost due to alcohol. Per capita consumption of alcohol users is extremely high, compared to the regional average in Africa but even compared to the biggest alcohol consuming countries in Europe. 60% of young Ugandans that use alcohol are engaging in binge alcohol use. This means that the country’s alcohol problems are only to get worse, if the youth is not better protected.

But the country has no written national alcohol policy, almost no regulation of alcohol availability, no alcohol promotion, advertising, and sponsorship regulations. In essence, the only WHO-recommended measure Uganda is currently implementing is the alcohol excise tax and this one measure is attacked by the alcohol industry.