Netflix has pledged to reduce the number of occasions where actors use tobacco products in its original programmes. This was after a study suggested that smoking on the streaming service’s programmes had contributed to a rise in on-screen smoking more widely…

Netflix has pledged to reduce the number of occasions where actors use tobacco products in its original programmes. The move comes after a study showed that smoking on the streaming service’s programmes had contributed to a rise in on-screen smoking more widely.

According to the report by Truth Initiative, tobacco imagery was increasing on small screens and depictions were much more common on streaming services than on cable television. 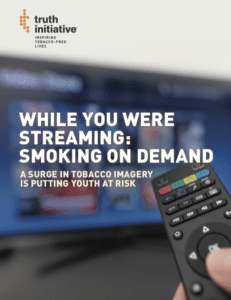 Netflix stated, all its new programmes, regardless of their content ratings, would not depict smoking “unless it’s essential to the creative vision of the artist or because it’s character-defining – historically or culturally important.”

Netflix strongly supports artistic expression. We also recognise that smoking is harmful and when portrayed positively on screen can adversely influence young people,” stated Netflix, as per The Guardian.

The Truth Initiative report recommended that all producers of video content, regardless of which streaming service, should eliminate tobacco depictions in its future programmes aimed at young people.

Content has become the new tobacco commercial. We’re seeing a pervasive reemergence of smoking imagery across screens that is glamorising and re-normalising a deadly addiction and putting young people squarely in the crosshairs of the tobacco industry,” said Robin Koval, the CEO of Truth Initiative, as per The Guardian.

News story: While you were streaming: Smoking on demand