Since January there has been 73 female homicides or “femicides” in Bolivia, this is the highest toll for this period in 6 years. This statistic is on top of the fact that Bolivia already has the highest femicide rate in South America. Alcohol is involved in 90% of reported cases of family violence…

Since January 2019 there has been 73 female homicides or “femicides” in Bolivia. This is the highest toll for this period in 6 years. This statistic is on top of the fact that Bolivia already has the highest femicide rate in South America.

Women have been mobilizing in Bolivia against gender based violence. While these movements have not caught on as much as the #MeToo movement or the “Ni Una Menos,” of Argentina, The Bolivian movement has been organizing demonstrations and putting up theater productions to raise awareness.

Alcohol’s link to gender based violence in Bolivia

Authorities have said that 65 women died in the January-June period. That’s the highest since 2013, when Bolivia declared the eradication of violence against women to be a government priority and included the crime of femicide into the penal code with prison terms.

As of this week, 73 cases of femicides have been registered, most in vulnerable sector. This is lamentable,” said Bolivian Attorney General Juan Lanchipa, including July deaths, as per Star Tribune.

According to official reports,

Which means strong alcohol control can have a significant impact in reducing violence against women in Bolivia. 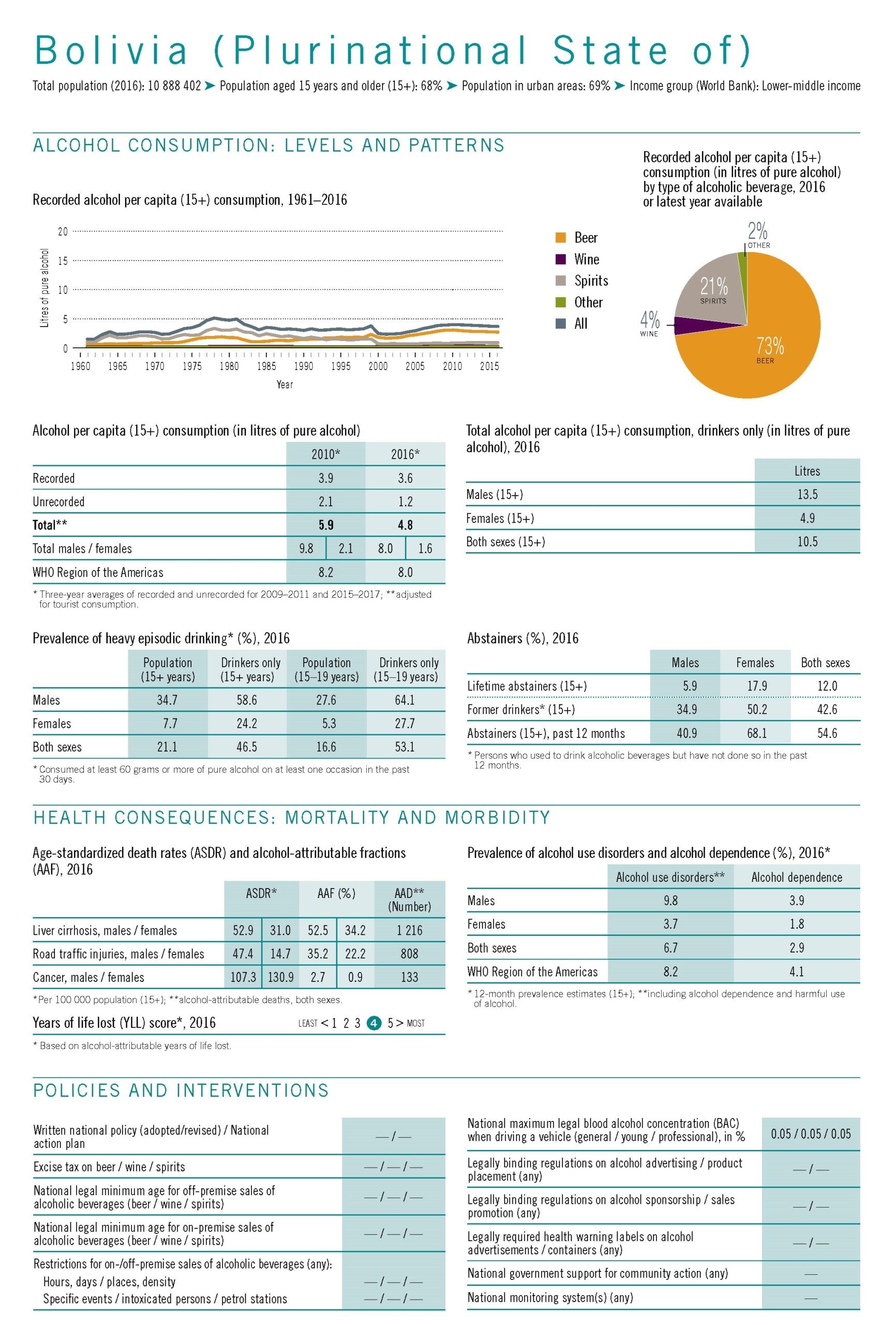 Bolivia ranks among the top countries in the world in terms of years of lives lost due to alcohol.

In Bolivia, most women however live free from alcohol (68.1%). Most of the alcohol is consumed by males and almost two thirds (59.1%) of the male population are alcohol users as per WHO data. Almost all these alcohol using men (58.6%) also engage in heavy episodic alcohol use. 9.8% of men have an alcohol use disorder in Bolivia, a rate much greater than the regional average.

The harm for the women is observable considering the high femicide rate in Bolivia, as well as domestic violence, and other forms of harms to other. Men also suffer due to high rates of alcohol consumption as 9.8% men have alcohol use disorders which is higher than the WHO Americas region average.

It is evident that Bolivia needs a comprehensive alcohol control policy, including the WHO alcohol policy best buys. 90% of family violence cases involve alcohol. This statistic itself demonstrates the need to reduce alcohol consumption in Bolivia to prevent and reduce its harm on people and specifically women and children.