Minister of Finance and Economic Affairs, Mamburay Njie had tabled the motion to parliament, counter-acting a previous parliamentary decision to increase the alcohol excise tax. The sudden change came after meetings with the alcohol industry, especially Banjul Breweries. The Finance Ministry ministry held several consultations on “the effects and challenges of the implementation of the approved alcohol excise tax rate increment, with a view of resolving the matter amicably in the supreme national interest,” according to Minister Njie.

Unfortunately, the increment on the said excise tax, which was proposed by my ministry in good faith and approved by this august assembly, came with its own challenges and unrealistic for implementation and therefore created and continues to create challenges in the industry,” explained Minister Njie, as per The Point.

The quotes and comments from Minister Njie expose that the assessment of the alcohol tax increment was a one-sided exercise, solely and exclusively considering the interests of the alcohol industry, especially Banjul Breweries.

Banjul Breweries, the sole beer maker in the country,  is owned by the French alcohol industry giant Castel Group. Castel is known in the West African region for its aggressive business practices, for instance the beer marketing war in Ivory Coast.

They have  forced the government to the negotiation table over the alcohol tax, threatening the brewery would quit The Gambia due to the tax increase. Banjul Breweries and Castel Group have argued that the brewery is currently the only “French investment” in The Gambia and that them leaving the country would be a bad example for other French “investments”.

Already in May 2019 did the Finance Ministry signal they would give into the pressure from the alcohol industry. A finance ministry source told The Fatu Network the government “will most likely abandon the policy.”

Alcohol tax reduction instead of increase

The ministry of health, public health concerns and overall aspects of human rights and sustainable development appear to be largely absent from the debate. Therefore, the one-sided meetings with the alcohol industry resulted not only in adjusting the tax increase, or halting it, but in the outright reduction of the alcohol tax in The Gambia. According to the Minister, Banjul Breweries alone paid D132 million to the Gambia Revenue Authority and its closure, would bring economic losses to The Gambia.

This is deeply problematic because firstly, the alcohol tax increase was effective in raising prices and reducing consumption; and secondly it was effective in reducing alcohol harm and protecting the people in The Gambia from rampant alcohol problems.

The 75% alcohol tax  has caused an increment on the prices of the products and consequently  this has led to a drop in consumption, according the motion tabled to the National Assembly. Banjul Breweries reacted with laying off 18 employees, out of their approximately 200 staff blaming the “unfavourable tax climate”.

But now government and parliament decided to reverse course, clearly threatened by the alcohol industry.

The Gambia ranks among the countries with the most years of life lost due to alcohol, according to the World Health Organization’s (WHO) 2018 Global Alcohol Status Report. The WHO also says that:

Alcohol taxation policies are among the most effective and cost-effective alcohol control measures. An increase in excise taxes on alcoholic beverages is a proven measure to reduce [alcohol harm]and it provides governments revenue to offset the economic costs of [alcohol harm].” 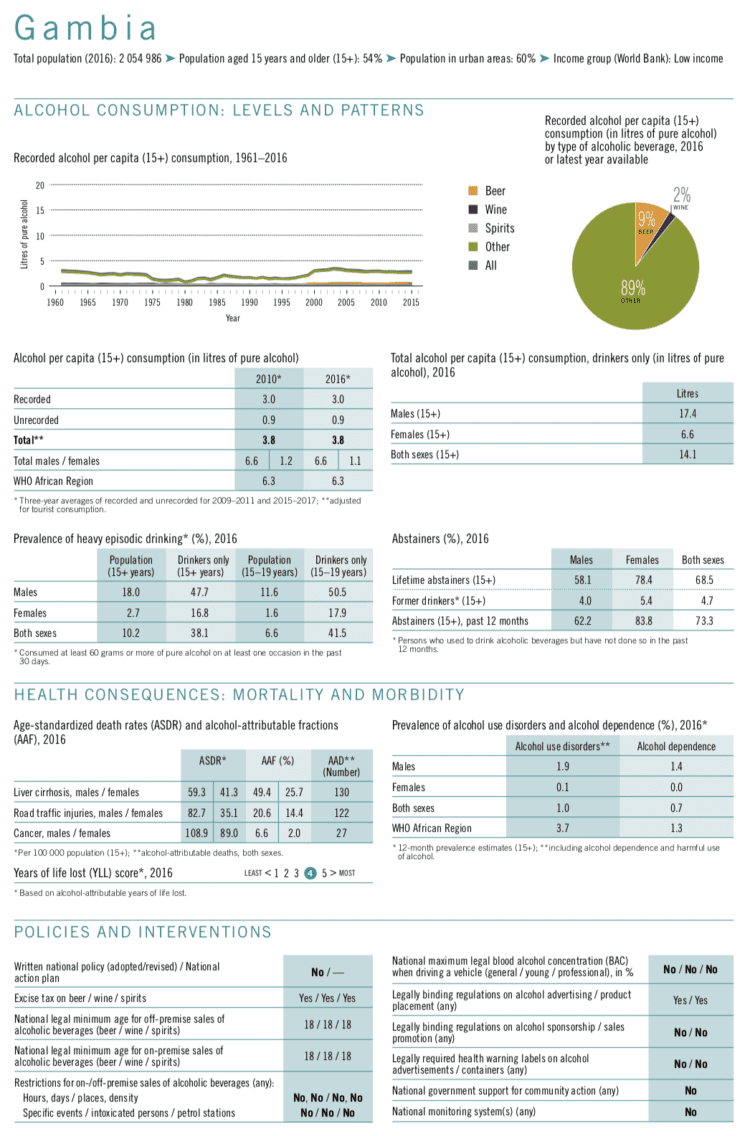 The WHO policy overview both shows that the alcohol burden on society in The Gambia is high, for example regarding heavy episodic alcohol use, especially among youth. It also shows that most alcohol consumption originates from informally produced alcohol – a problem that alcohol taxation does not address.

And yet, alcohol taxation is a key measure to help raise domestic revenues, reduce and prevent alcohol harm and help promote sustainable development. The Gambia currently does not even have a written national alcohol policy. The WHO 2010 World Health Report showed that:

Raising taxes on alcohol to 40% of the retail price could have an even bigger impact [than a 50% increase in tobacco taxation].

Estimates for 12 low-income countries show that consumption levels would fall by more than 10%, while tax revenues would more than triple to a level amounting to 38% of total health spending in those countries. “