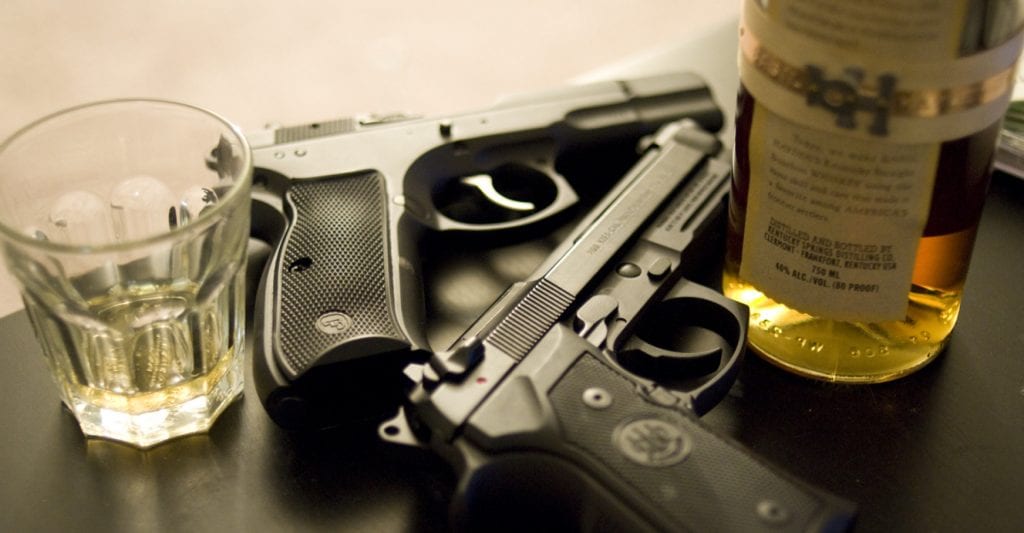 According to research alcohol use is more of a risk factor for gun violence than being diagnosed with a mental illness.

In the wake of two new mass shooting, U.S. President Trump stated recently mental illness as a reason for gun violence, but research has shown there are far greater risk factors. These include:

It is problematic and stigmatizing to blame gun violence on mental illness. Specially as research says otherwise. About 50% of Americans meet criteria for a mental illness at some point in their lifetime. According to the American Psychological Association, people with serious mental illness commit only about 3% of violent crimes.

According to research exploring risk factors for gun violence, most mental illnesses are not correlated with gun violence.

The majority of mental health symptoms we examined, including anxiety, depression, stress, PTSD, and borderline personality disorder, were unrelated to gun violence,” said lead study author Yu Lu, a postdoctoral research fellow at the University of Texas Medical Branch, as per NBC News.

Alcohol and substance use related to gun violence

According to a report from the Consortium for Risk-Based Firearm Policy, substance use, especially alcohol, is a major risk factor that could influence whether a person will use a gun to commit a violent crime.

The best predictor of future risky or violent behavior is past behavior,” said Beth McGinty, an associate professor of health policy and management at the Johns Hopkins Bloomberg School of Public Health, who was involved with the report, as per NBC News.

Having multiple DUIs or DWIs is one way of operationalizing that type of risk.”

The report found, people who had been convicted of driving under the influence of alcohol (DUI) at least twice in a five-year span were more likely to commit gun violence than a person with mental illness.

… people with mental illnesses are more likely than the general population to have suffered physical or mental abuse, be unemployed, have a parent with an arrest record, or have alcohol or other drug dependency. It is these factors, not the mental illness itself, that are more likely to present in people who carry out violent gun crimes,” found a study by the National Epidemiologic Survey on Alcohol and Related Conditions, as per Forbes.

While mental illness is a growing problem in the US it is not unique to the U.S. and is a global phenomenon. Gun violence is however rapidly increasing in the US comparative to other countries. It is problematic to correlate these two trends as research shows otherwise. Instead the U.S. should focus on resolving gun violence by better gun control and tackling the major risk factors such as alcohol and other substance use.