Posted on August 12, 2019 in
Alcohol Industry, Alcohol's Harm To Others, Human Rights, Obstacle To Development, Policy

It is 10 years since the NZ Law Commission reviewed the alcohol laws in New Zealand. Yet the recommendations from the review have been ignored by successive governments over the decade.This 10 year government alcohol policy failure has led to drastic effects for New Zealand. Over the past 10 years, alcohol resulted in, 8000 premature deaths…

It is 10 years since the New Zealand Law Commission reviewed the alcohol laws in New Zealand. Yet the recommendations from the review have been ignored by successive governments over the decade.

More recently, Jacinda Ardern’s Labour-led government has failed to commit to a recommendation from the Mental Health & Addiction Inquiry to strengthen alcohol regulations.

This 10 year government alcohol policy failure has led to drastic effects for New Zealand. Over the past 10 years, alcohol resulted in,

Further for police, alcohol has a way of trickling into almost every frontline job, from violence and sexual assault cases to driving under the influence and burglary.

According to Alcohol Action NZ, the only substantial change in alcohol regulations in this time have been reductions in the legal driving limits to a zero alcohol limit for drivers under the age of 20, and 0.05 for drivers over 20 years of age.

The big ‘winners’ from the continuation of the damaging [alcohol] culture of New Zealand are alcohol businesses, many of which are multinational companies” said Dr Geoff Robinson, Chair of Alcohol Action NZ, as per The Daily Blog.

State of the alcohol laws in NZ

The 2010 Law Commission report, ‘Alcohol in Our Lives: Curbing the Harm’, laid out 153 recommendations for reducing the harm of alcohol on society, with then-commissioner Sir Geoffrey Palmer spearheading the push for reform.

An initial surge in interest from the National-led government saw watered down legislation passed in 2012, as the Sale and Supply of Alcohol Act, which contained virtually no effective reform.

Sir Geoffrey Palmer believes four of the 2010 recommendations could still have a huge impact in reducing alcohol harm: raising the age of purchase to 20-years-old; regulating advertising and sponsorship; raising prices; and introducing an excise tax.

Main causes of the increase in alcohol harm in the country are cheap alcohol and increased advertising.

It’s been five years since a 178-page Justice Ministry review found that a minimum alcohol price rise of $1 per standard drink could save the nation $318m in alcohol harm over a decade.

The ministry chose to hold-off introducing a minimum price for five years, in order to see how Local Alcohol Policies bedded-in. However, local policy has been failing.

Alcohol Healthwatch executive director Nicki Jackson said that within those five years there had been significant increases in alcohol harm and there was an urgent need to revisit the proposal.

In 2014 the Ministerial Forum on Alcohol Advertising and Sponsorship  recommended banning alcohol sponsorship and advertising at all sports, sports broadcasting and cultural and music events where 10% of the audience was under 18.

For the past five years nothing has come of those recommendations either. People and specifically children are still exposed to alcohol ads. 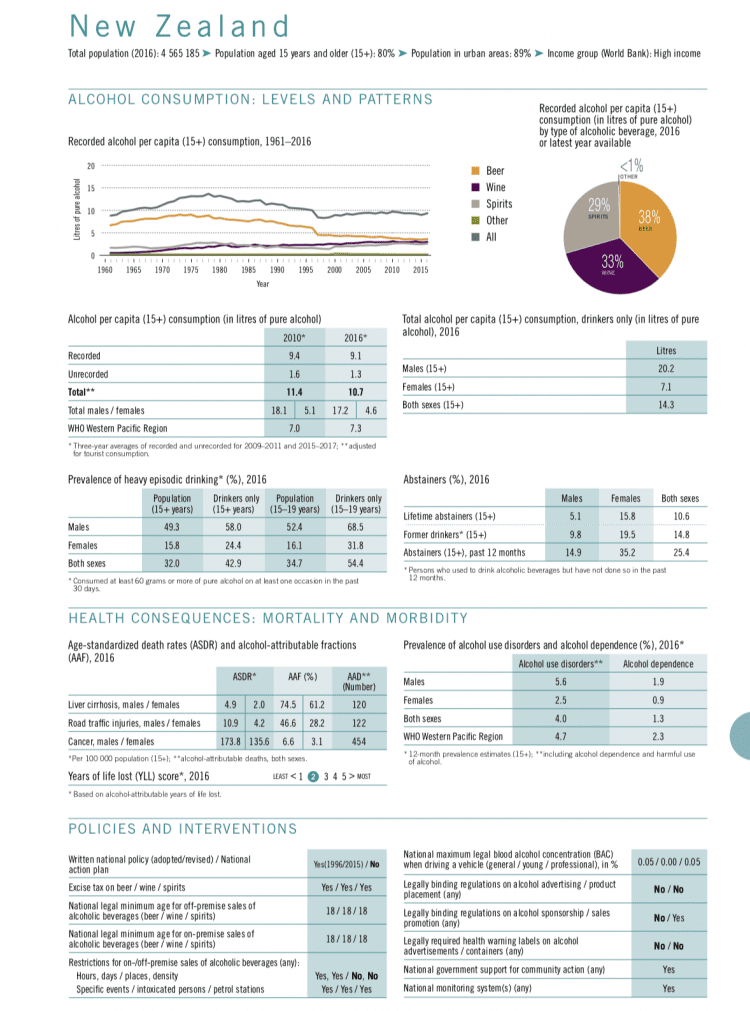 Latest data from the WHO Global Alcohol Status report shows that per capita alcohol use among consumers is very high in New Zealand. Almost 45% of all alcohol consumers also engage in heavy episodic alcohol use. And more than half of all young people consuming alcohol are engaging in binge alcohol use. Alcohol is also fueling liver disease and cancer in New Zealand.

It is evident that the New Zealand government needs to take immediate action in the interest of public health to curb alcohol harm and create safer places for all and specially children.