According to a new study, alcohol taxes in the USA don’t come close to covering society’s costs due to pervasive alcohol harm. While profits are pocketed by a few Big Alcohol business executives and shareholders, the costs of massive alcohol harm are externalized and socialized for the public to pay for.
The study published in the Journal of Studies on Alcohol and Drugs found the total harm caused by alcohol use is a whopping $2.05 per unit of alcohol in the United States, and, of this, the government ends up paying about 80 cents per unit of alcohol. However, the federal government and states only bring in about 21 cents per unit of alcohol on average in alcohol taxes…

According to a new study, alcohol taxes in the USA don’t come close to covering society’s costs due to pervasive alcohol harm.

Research shows that higher prices on alcohol, often through increased taxes, lead to reduced alcohol use, which in turn reduces a range of alcohol-related harms such as violence, road traffic injuries and fatalities as well as cancer, liver cirrhosis and addiction. Increasing alcohol prices is a best buy policy measure recommended by the WHO.

Increasing alcohol taxes could improve public health and reduce the disparity between alcohol-related costs and alcohol taxes in states,” said Timothy S. Naimi, senior author of the study, as per Science Daily.

In the study, Naimi and colleagues analyzed state and federal tax data from 2010. Although the federal government charges a standard excise tax that applies in all states (the equivalent of 5, 4 and 16 cents per unit of alcohol for beer, wine and distilled spirits, respectively), states can charge up to three additional taxes: specific excise taxes, ad valorem excise taxes, and state general sales taxes.

State and federal specific excise taxes are based on the volume of alcohol sold, not the price, and therefore can erode over time because of inflation.

Ad valorem excise taxes and state general sales taxes are based on a percentage of the retail price and, therefore, increase in tandem with the purchase price. However, although all states charge specific excise taxes, only a minority of states have ad valorem taxes and not all states apply sales taxes to alcohol.

The bottom line is that current alcohol taxes, even considering all types of tax including general sales taxes, don’t come close to covering alcohol-related costs,” said Timothy S. Naimi, senior author of the study, as per Science Daily.

It is evident the alcohol tax system in the USA needs an urgent upgrade. Currently, the costs from alcohol harm are payed for by the public, while a few business executive and shareholders are raking in the profits. Alcohol taxation is an important tool to tackle this externalization of costs.

Nevertheless, a majority of senators in the U.S. Congress is supporting a bill that can make the Trump administration’s alcohol excise tax break permanent for the alcohol industry. Big Alcohol is lobbying aggressively to make sure this tax break will become permanent.

The bill has already gained support from 28 Democrats, 22 Republicans and one Independent as co-sponsors in the Senate, and 86 Republicans and 70 Democrats in the House of Representatives. Alcohol industry lobby groups have joined forces to make sure alcohol policy benefits the industry instead of the people. The Beer Institute, the Brewers Association, the Distilled Spirits Council of the United States (DISCUS), the American Craft Spirits Association, Wine America, the Wine Institute, and the U.S. Association of Cider Makers are the groups working to push the bill.

Alcohol harm in the United States

More than 30,000 cancer deaths, and more than 34,000 liver cirrhosis deaths are caused by alcohol in the U.S. Every second male alcohol consumer is engaging in heavy episodic alcohol consumption. Almost 14% of the population has an alcohol use disorder – significantly above the regional average, and the Americas region is the second biggest alcohol consumer in the world, after Europe. 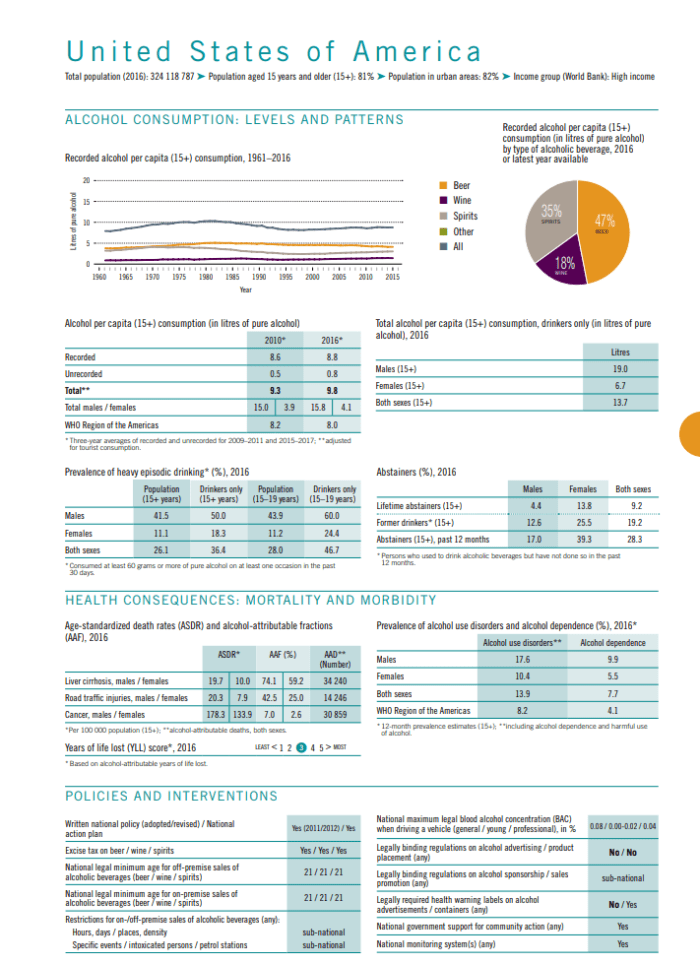 Alcohol’s harm to others also has epidemic proportions in the United States. A recent study showed that the harms of alcohol impact 1 in 5 adults other than the alcohol user. The study found that an estimated 53 million adults said they had experienced at least one harm attributable to someone else’s alcohol use in the past year. That harm ranged from property damage to physical injury.

The different types of harm included harassment, feeling threatened or afraid, having belongings ruined, having property vandalized, being pushed, hit or assaulted, being physically harmed, being in a traffic accident, being a passenger in a vehicle with an intoxicated driver, having family or marital problems, and having financial trouble.

Alcohol harm is pervasive in the United States and is fueling the decline of life-expectancy documented in the last two years. However, alcohol industry lobbying power is also pervasive and so alcohol policy measures are being watered down, weakened and disbanded all-together, leading to an increase in alcohol availability and related harm across the country.

Sweeping the country are changes to alcohol laws on all levels that favor the private profit interest of the alcohol industry and disregard adverse effects of easily available, cheap alcohol that is widely promoted without any public health and safety considerations.