A new study shows that heavy alcohol use brings in the bulk of Big Alcohol’s profits.

The Economist reports about the study and writes:

The alcohol industry has pitched itself as part of the solution. In Britain more than 100 producers and retailers have signed a ‘responsibility deal‘ and promised to ‘help people to drink within guidelines’, mostly by buying ads promoting ‘moderation’.

However, if these campaigns were effective, they would ruin their sponsors’ finances.” 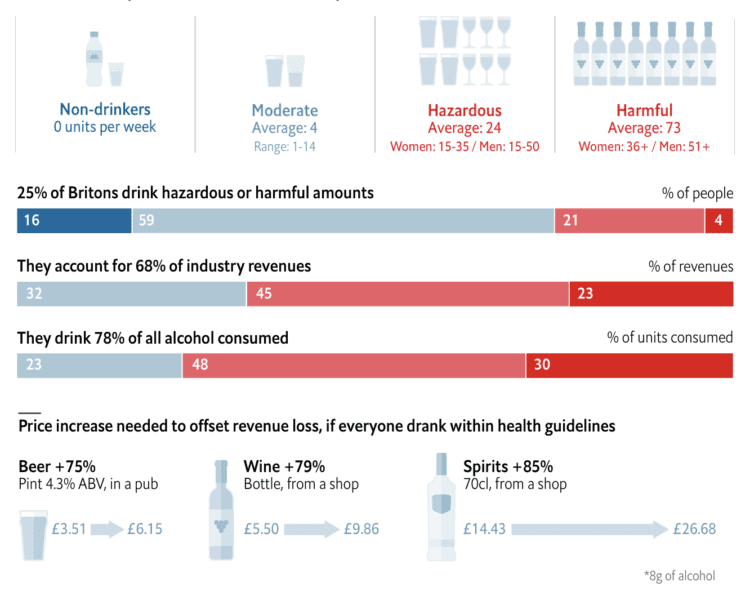 Windfall profits from heavy alcohol use

According to the study, if all consumers would stick to the guidelines for low risk alcohol consumption:

The origin of the bulk of Big Alcohol’s profits is also source for massive harm on individuals, communities, societies and economies.

In 2010 a group of experts scored the total harm caused by 20 common (legal and illegal) drugs. Their analysis showed that alcohol clearly caused the greatest harm and related costs, mostly due to the social harm, i.e. the damage alcohol does to others than the alcohol users themselves. This is largely because of alcohol’s easy and wide availability, as The Economist writes. 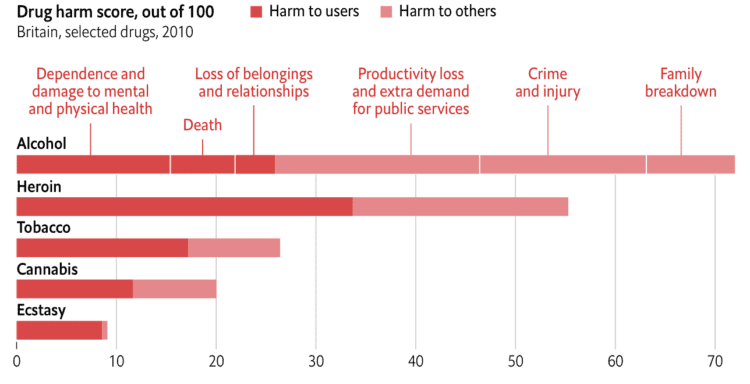 @The Economist 2019, Alcohol the socially most harmful drug

Alcohol causes 24,000 deaths and over 1.1m hospital admissions each year in England, at a cost of £3.5bn to the NHS. Yet policies to address this harm, like minimum unit pricing and raising alcohol duty, have been resisted at every turn by the alcohol industry.

Our analysis suggests this may be because many [alcohol] companies realise that a significant reduction in harmful [alcohol use] would be financially ruinous,” said Aveek Bhattacharya, a policy analyst at the Institute of Alcohol Studies and lead author of the study, as per The Guardian.

In fact, the alcohol industry now outspends Big Tobacco in terms of lobbying, according to The Economist.

The above mentioned ‘responsibility deal‘ has been shown to be ineffective and even harmful regarding the goal of reducing alcohol consumption and related problems.

The Truth About Britain’s Public Health Responsibility Deal For Alcohol

In 2012, David Cameron announced plans to introduce a minimum unit price for alcohol, but the plan was delayed and ultimately abandoned because of relentless political interference by the alcohol industry. Big Alcohol is also pushing back against having graphic warning labels on alcohol containers.

In addition to lobbying, the alcohol industry is also creating their own front groups touting “responsible” alcohol use such as “DrinkAware”, which place the private interests of alcohol industry shareholders and executives above the public interest in health, safety and development for all, by propagating myths and creating confusion regarding scientific evidence showing alcohol is bad for health.

For years the alcohol industry has presented itself as part of the solution, not the problem, when it comes to harmful [alcohol us].

This research shows that their business model is fundamentally reliant on encouraging millions of people to risk their health by [consuming alcohol] above government’s own recommended limits,” said Sir Ian Gilmore, the chairperson of the Alcohol Health Alliance (AHA) UK, as per The Guardian.

As the lead author of the study said, it is high time that the government recognized how much Big Alcohol has to lose from effective alcohol policies, and be more wary of its attempts to derail meaningful policy action through political interference, aggressive lobby campaigns and the pretence of voluntary partnerships.