India’s Supreme Court ruled to ban the sale of liquor in proximity to major roads to reduce the number of deaths caused by drivers under the influence of alcohol – a massive problem across India. But major global alcohol companies oppose(d) the road safety measure…

India’s Supreme Court ruled to ban the sale of liquor in proximity to major roads to reduce the number of deaths caused by drivers under the influence of alcohol – a massive problem across India. But major global alcohol companies oppose(d) the road safety measure.

The ban comprises roadside shacks that line highways across the country, as well as restaurants and bars near roads. As a result, every outlet, from luxury hotel to beer shack, within 500 meters driving distance of state and national highways had to become alcohol-free.

After its initial ruling in December 2016, the court modified the order slightly to reduce the distance to 220 meters for municipality areas with a population of under 20,000. It also exempted Sikkim and Meghalaya from the 500 meter rule. Further, it allowed the licences issued before December 15, 2016, and valid beyond April 2017 to continue until the licence expires.

This ruling led to the closure of about a third or about 30,000 of the country’s liquor vends, causing a drop in demand for beer and spirits.

There are 60,000 fatal accidents on Indian highways annually. Over 70% of these fatalities are caused by alcohol, every year. Another fact that illustrates the heavy toll of alcohol-fuelled road crashes is that 10% of global road fatalities occur in India, even though the country only accounts for 1% of the world’s vehicles.

Awareness about alcohol’s harm in general and driving under the influence in particular is very low.

The Supreme Court’s move is a welcome decision. It’s a beginning,” said Prince Singhal, the founder of the Coalition Against Drunken Driving (CADD), according to CNN.

Only the alcohol industry is dissatisfied with the new road safety measures. Big Alcohol calculated that close to $10 billion worth of annual revenue could be lost due to the new regulation, according to CNN. They ignored the gains in public safety, health, law enforcement costs, productivity and more healthy spending in other sectors.

For example, Big Alcohol giant Pernod Ricard clearly opposed the road safety measure, fearing more losses. After a rough 2016 for its India operations with a growth slump to 3% in six months towards the end of the year, Pernod Ricard had no interest in the further strengthening alcohol regulations by the Supreme Court. Pernod Ricard India CEO Girard-Reydet complained to Live Mint:

The number of liquor stores and on-trade outlets are already very low in most states. The recent decision by the Supreme Court is a real challenge on a short-term basis.” 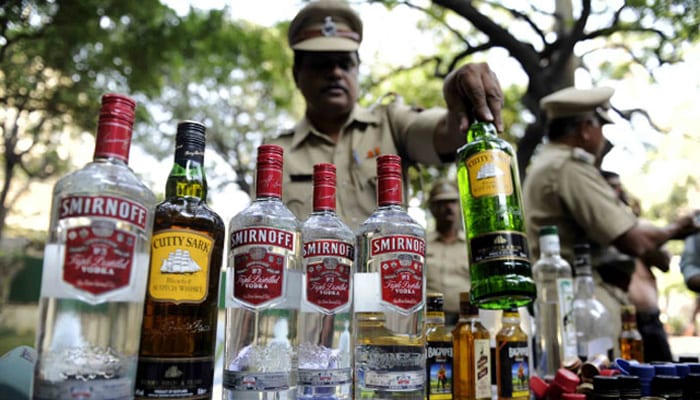 But the number of alcohol outlets along roads and highways is only low for Big Alcohol executives. In reality, alcohol outlets are omnipresent. Road safety expert Harman Singh Sidhu, President of ArriveSafe, illustrates the frequency of alcohol outlets vividly, per The Epoch Times. On one stretch of 181 miles of national highway between the northern Indian states of Punjab and Haryana, there are 185 liquor vendors, according to statistics released by the National Highway Authority of India in response to an access to information request. This means there’s one liquor vendor every mile. Driving at national speed limit of 90 km/hr (56 mph), that’s one liquor vendor every minute.

An analyst reported that a third of all liquor outlets in India could be affected by the Supreme Court’s ban, according to Bloomberg Quint.

In May 2017, data showed that alcohol sales have dropped by around 5% due to the alcohol outlet ban near highways. Big Alcohol saw sales of 23.47 million cases in April, down from 24.69 million cases in the previous year.

For example, Danish brewer Carlsberg reported a contraction in volumes in its Asian operations in January-March 2017, because of the ban in India. If not for the Supreme Court ruling, Carlsberg would have grown by at least 2%. But its volumes in India declined by almost 20%. Carlsberg’s CEO Cees’t Hart informed investors, according to Business Today:

… in India, because of the implication of the highway ban, we had a negative double-digit volume decline.”

Diageo is also affected. The company expects to feel the impact of the Supreme Court decision to last at least until September 2017.

We expect the impact to be mitigated eventually and where it doesn’t get mitigated the consumption will shift to other outlets,” said Anand Kripalu, CEO of Diageo-owned United Spirits in a presentation for shareholders, as per Business Today.

Until the beginning of 2019, Big Alcohol saw two consecutive years of decline in India. 2017 was the worst year in more than decade for the alcohol industry in India, as the market shrank 3% to 328 million cases, according to The Economic Times.

All this is evidence about how effective alcohol control can affect the alcohol industry and why they oppose such cost-effective, high-impact road safety measures.

Instead, the alcohol industry focuses on ineffective education programs. For example, in India Diageo runs the Youth Road Safety Learners License Programme that attempts to create a formal training program for young people, in collaboration with the Institute of Road Traffic Education (IRTE).

Honestly, I am shocked and pained to know that the government needs crutches of a liquor company, Diageo, to run the program,” said road safety expert Harman Singh Sidhu, President of ArriveSafe, per The Epoch Times.

The World Health Organization recommends in its SAFER technical package that strategies to reduce harm associated with driving under the influence should include deterrent measures that aim to reduce the likelihood that a person will drive under the influence of alcohol, and measures that create a safer driving environment in order to reduce both the likelihood and severity of harm associated with alcohol-influenced crashes.