WHO: New Report about Alcohol’s Harms to Others

Alcohol ranks at the 9th place among risk factors in the most recent Global Burden of Disease (GBD) analysis. This does not take into account the social problems which fall outside the GBD analysis of death and disease…

WHO: New Report about Alcohol’s Harms to Others

The World Health Organization (WHO) has published a new report about alcohol’s harms to others.

WHO, in collaboration with the Thai Health Promotion Foundation, the International Health Policy Program of Thailand and the Center for Alcohol Policy Research in Australia, issues the report “Harm to Others from Drinking: Patterns in Nine Societies” to illustrate the social burden and human costs of alcohol to others than alcohol users themselves.

Documenting and developing the approaches to reduce alcohol’s harm to others is an important area highlighted in the WHO strategy, wrote Ms. Dévora Kestel, Director, Department of Mental Health and Substance Abuse at WHO.

This joint program of research […] in nine high, middle- and low-income countries, sets out to study the magnitude and scope of alcohol’s harm to others in general populations and how it is encountered and dealt with in response agencies like the police, hospitals, social welfare offices and women’s shelters and support centers.”

Putting alcohol’s harm to others on the map 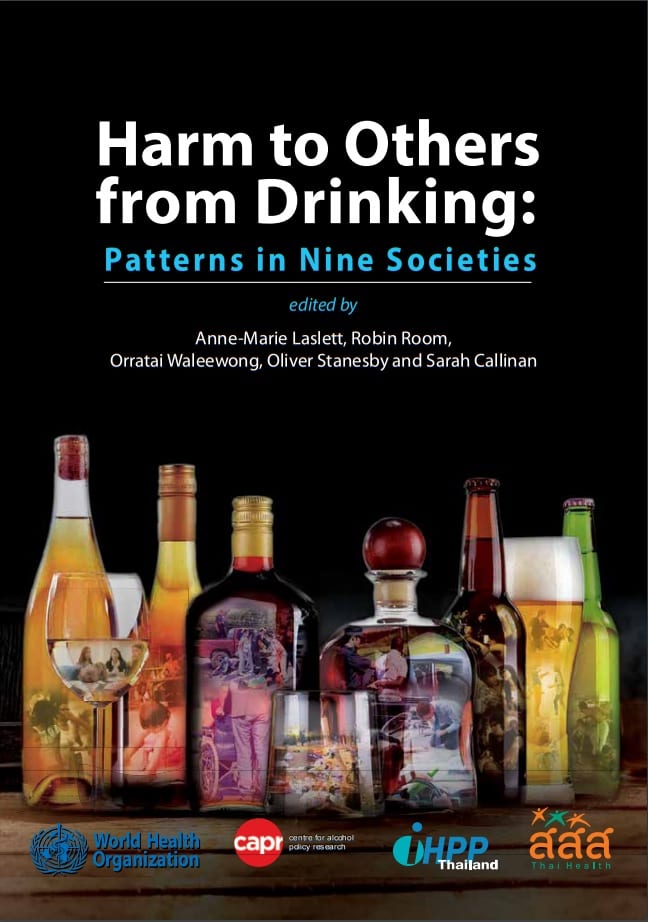 As the magnitude of effects from other’s alcohol use on society is heavy the WHO designated “alcohol’s harm to others” as a priority programme area in a 2009 WHO meeting in Stockholm.

In implementing the priority programme area on harm to others, WHO formed an alliance through a Memorandum of Understanding with the ThaiHealth Promotion Foundation (ThaiHealth); through this, fieldwork on the Harm to Others from Drinking Project was funded in six low and middle income countries (LMICs):Chile, India, Nigeria, Sri Lanka, Thailand and Viet Nam. The project involved a general population survey in each country, and these surveys provide the basis for this report.

Alcohol ranks at the 9th place among risk factors in the most recent Global Burden of Disease (GBD) analysis. But this does not take into account the social problems, which fall outside the GBD analysis of death and disease.

The GBD analyzes alcohol users primarily and does not take into consideration the effects the alcohol user has on others around him and society.