Russia is set to support NCDs prevention and control efforts in Cambodia. The estimated death rate from NCDs in Cambodia is currently about 56%, or approximately half of all deaths in the country every year and higher than the global average of 44%. The assistance by Russia will be instrumental for Cambodia to reduce their NCDs burden…

Russia is set to support NCDs prevention and control efforts in Cambodia.

H.E. Mr. Dmitry Tsvetkov, Ambassador of the Russian Federation to the Kingdom of Cambodia delivered a speech at the event to present the WHO/UNDP special research “Prevention and Control of Noncommunicable Diseases (NCDs) in Cambodia, the case for Investment”. The research was carried out with Russian financial assistance, and held by the Ministry of Health of Cambodia.

In his address the Ambassador welcomed the Cambodian authorities’ efforts to counter the NCDs epidemic, highlighting Russia’s initiatory role in creating the UN Inter-Agency Task Force (UNIATF) for the Prevention and Control of NCDs in 2013.

The main risk factors for NCDs are alcohol use, tobacco use, unhealthy diet and lack of physical exercise.

The ambassador stressed that the Russian Federation is ready to continue to support and assist the Government of Cambodia in improving its national healthcare system.

Russia has been working towards reducing the NCD burden in the European region as well through a Donor Agreement with WHO Europe.

The estimated death rate from NCDs in Cambodia is currently about 56%, or approximately half of all deaths in the country every year and higher than the global average of 44%. The assistance by Russia will be instrumental for Cambodia to reduce their NCDs burden.

Alcohol is among the major drivers of the NCDs epidemic.

As WHO data shows, alcohol consumption is rising in Cambodia. But the country is already ranking among the leaders in years of life lost due to alcohol. While there are 69% of people living alcohol-free in any given year, per capita intake of alcohol consumers is more than 21 liters per year (27.4 liters for men) – a staggering amount.

As such, alcohol is causing more than 450 cancer deaths annually in Cambodia and almost 9% of Cambodian men have an alcohol use disorder. 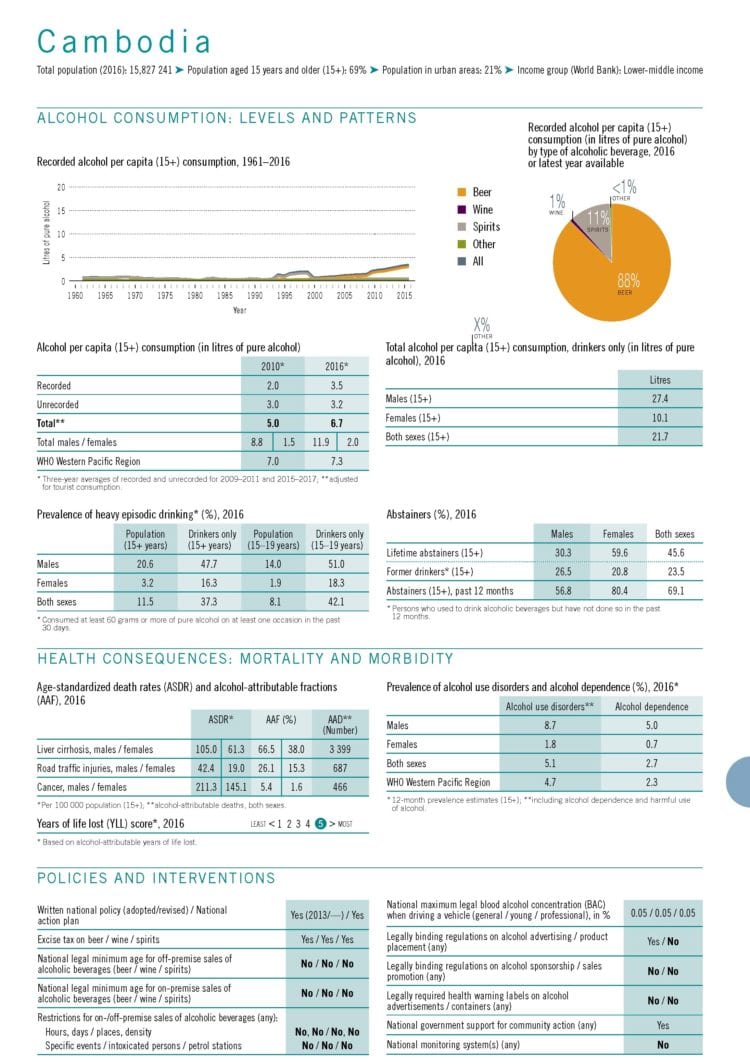 Alcohol prevention and control is very weak in Cambodia. There is no national legal age limit at all and other alcohol availability measures are also completely absent. Alcohol marketing regulation is also piecemeal. All this leads to high numbers of children and youth engaging in heavy episodic alcohol use. More than 40% of young alcohol users are engaging in binge alcohol consumption.

The support for better NCDs prevention and control, including alcohol policy, is therefore urgently needed and promises significant improvements to the health and development outlook of Cambodians.