In Ireland alcohol is the most widely used drug among teens, a new government study reports. The study which looked into substance use among 15 to 24 year olds found, over three-quarters (78%) of young Irish people have tried alcohol…

In Ireland alcohol is the most widely used drug among teens, a new government study finds.

The study, which looked into substance use among 15 to 24 year olds, found:

The findings come after a Lancet study found Irish youth to be the third highest binge alcohol users in the world. It was found that 61% of girls and 58.8% of boys in Ireland engage in binge alcohol consumption.

86 young lives (below 24 years) were taken due to alcohol and other drug addiction in 2016, with a further 629 under 18 year olds receiving help for addiction. 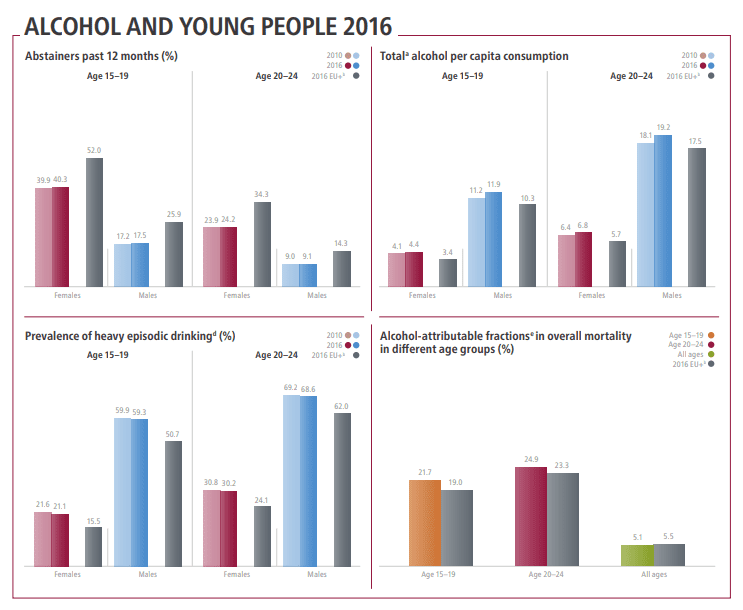 As the WHO Europe reports, alcohol per capita consumption and binge alcohol use among irish youth are both higher than the average of their European counterparts.

To tackle the problem secondary schools will soon be taught a new programme on alcohol and drugs in SPHE, as a way of educating them on the dangers of them and precautions that must be considered.

Know the Score is a good example of the partnership working to promote the health and well-being of our young people, and to support teachers and schools in the important work they do as part of the wider Healthy Ireland agenda,” said Health Minister Simon Harris, as per The Irish Post.