Samoa’s government is looking to better regulate and control alcohol marketing in a bill to be introduced to Parliament in the course of 2020. Alcohol marketing, despite its serious harmful effects, is currently unregulated in the country…

Samoa’s government is looking to better regulate and control alcohol marketing in a bill to be introduced to Parliament in the course of 2020.

According to Radio New Zealand reporting, the chair of the Liquor Board, Tialavea Tionisio Hunt, confirmed the Bill was being drafted and would include “criteria for the advertisement of alcohol”.

Alcohol marketing remains largely unregulated in Samoa, a problem that was highlighted in a report by the country’s Law Reform Commission in 2015-16.

There are no restrictions, for example, on times when advertisements of alcohol can be televised or broadcast, which often occurs at a time when minors would normally be part of the audience,” said the report.

The report was also concerned that billboards and posters advertising alcohol were sometimes located near schools and at bus stops used by students.

In Samoa, more than 80% of the adult population lives free from alcohol and per capita alcohol use is very low, in fact below the regional average of the Western Pacific region.

Nevertheless, alcohol harm is significant and alcohol policy is weak, especially in the area of alcohol marketing. 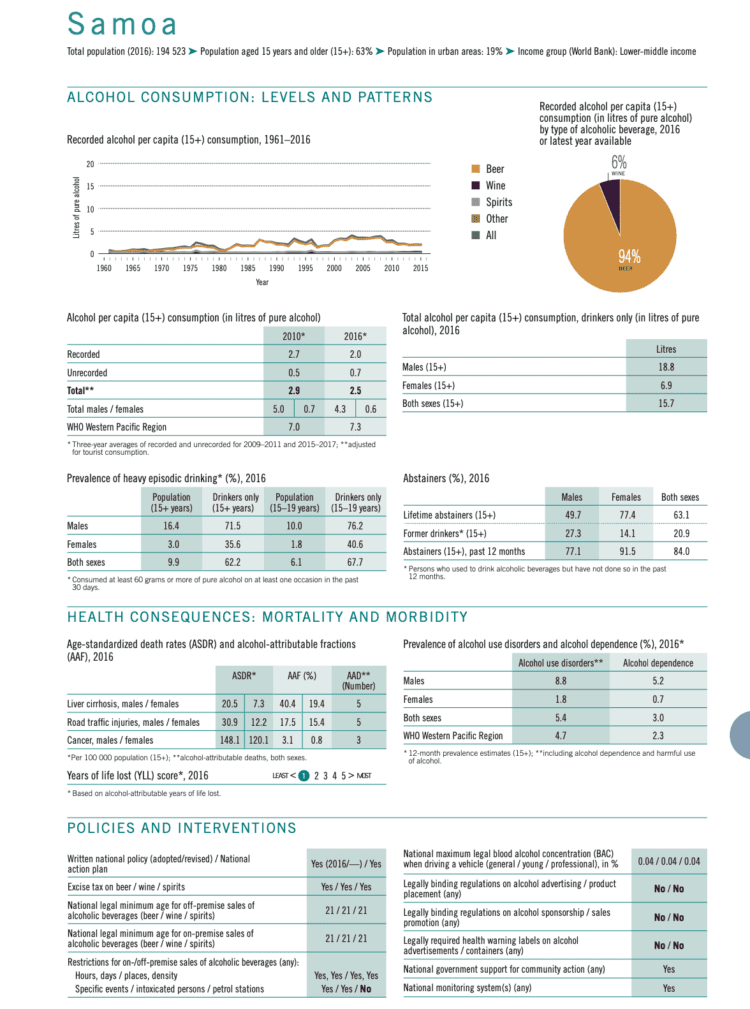 In Samoa, among male alcohol users, per capita annual alcohol intake is more than 18 liters. And among young people between the ages of 15 to 19 years, almost 70% engage in binge alcohol use. Alcohol use disorders among males in Samoa is almost double the regional average.

Alcohol marketing has been linked to serious alcohol harm: exposure to alcohol marketing leads to early onset of alcohol youth and to more alcohol consumption, when children and youth are already using alcohol. That is why the World Health Organization has designated alcohol marketing regulations as one of the three alcohol policy best buys.

Nevertheless, chair of the Liquor Board Tialavea is not considering proposing a total ban on alcohol advertising, despite grave public concern regarding the adverse social impact of alcohol.

For more reading from the science hub:

Topical page on the research about alcohol marketing, from the Movendi International Science Hub