Alcohol harm has been shown to be an industrial epidemic – as it is a risk factor for over 200 different health conditions across all categories of disease burden, affecting both the incidence and progression of infectious diseases, non-communicable diseases, and injuries.

And yet, global alcohol consumption is projected to be rapidly expanding and to increase by more than 10% by 2030 – despite governments’ voluntary commitment to reduce per capita alcohol use by 10% until 2025.

There are four key examples from around the world illustrating the obvious conflict of interest between the private profit interests of the alcohol industry and the public interest in health and development for all:

Analysis of data collected in the International Alcohol Control study and used to estimate how much heavier alcohol consumption occasions contribute to the alcohol market in five different countries shows the alcohol industry’s reliance on the heavy use of alcohol.

Big Alcohol Relies on Heavy Users For Their Profits

Study: How Dependent is the Alcohol Industry on Heavy Alcohol Use in England?

Those using alcohol above guideline levels are estimated to account for 68% of total alcohol sales revenue in 2013/14. This represents 77% of beer, 70% of cider, 66% of wine and 50% of spirits sales value.

The heaviest alcohol using 4% of the population account for 30% of all consumption and 23% of all industry revenue. If all consumers reduced their alcohol use to within guideline levels, alcohol sales revenue could decline by 38% (£13 billion).

In England, the alcohol industry appears to be highly financially dependent upon heavy alcohol use, and might face significant financial losses were consumers to use alcohol within guideline levels.

The Economist reports about the study and writes:

The alcohol industry has pitched itself as part of the solution. In Britain more than 100 producers and retailers have signed a ‘responsibility deal‘ and promised to ‘help people to drink within guidelines’, mostly by buying ads promoting ‘moderation’.

However, if these campaigns were effective, they would ruin their sponsors’ finances.”

The alcohol industry depends for its profits on those consumers that use alcohol in heavy amounts, regularly exceeding the recommended daily intake of alcohol, a 2016 report from Australia shows.

More than 3.8 million Australians average more than four standard alcoholic drinks per day, twice the recommended amount of the health guidelines. These alcohol users are targeted by the alcohol industry and branded as “super consumers”, according to the latest report from the Foundation for Alcohol Research and Education.

Those in the business of selling alcohol have long known about the skewed distribution of alcohol consumption in the population. In meetings among people in the industry, those at the top end of the distribution are called “super consumers“, and they are vital to maintaining or increasing sales.

If all [alcohol users] in Australia were to [consume] within the government guidelines for low-risk [alcohol use], the alcohol market would shrink substantially,” wrote Robin Room and Michael Livingston in The Conversation.

If governments want to reduce alcohol-related harms, they can’t rely on the industry’s commitment to responsible [alcohol use]. It’s directly against the industry’s interests for the heaviest [alcohol users] (who make up the majority of their sales) to [consume] less.”

Analysis shows how heavily dependent the alcohol industry is on heavy alcohol users. If the top 10% of alcohol consumers would be induced to curb their consumption level – for example through alcohol taxation and other price policy measures – to that of the next lower group (the ninth decile), the total alcohol sales would fall by 60%.

While 30% of the American population live free from any alcohol consumption and another 30% consume less than one alcoholic drink per week, on average, the top 10% of alcohol users – 24 million adults over age 18 – account for more than 50% of the alcohol consumed in any given year.

Clearly Big Alcohol is heavily dependent on heavy alcohol consumers for their profits.

One consequence is that the heaviest [alcohol users] are of greatly disproportionate importance to the sales and profitability of the alcoholic-beverage industry,” writes Philip J. Cook, author of “Paying the Tab”.

Already in 2003, a comprehensive study showed that underage alcohol users and adult heavy alcohol users in the United States were responsible for 50.1% of alcohol consumption and 48.9% of consumer expenditure.

There is a direct link between alcohol industry products and practices, their profits and population-level alcohol harm.

A few years after the adoption of the WHO Global Alcohol Strategy, alcohol industry-favorable propaganda was increasing with the posting of over 3500 ‘Industry Actions to Reduce Harmful Drinking’ that were designed to demonstrate Big Alcohol’s support of the strategy. The problem is that not only are these actions mostly trivial, but in some cases potentially harmful to public health – as research demonstrated.

Since Big Alcohol is dependent on under-age alcohol consumers as well as adult heavy alcohol users for the majority of their total profits, they cannot support the most effective, evidence-based alcohol policy interventions, and not even the public’s understanding of the real effects and harm of alcohol. This would affect their bottom line at a massive scale.

In fact, the alcohol industry wants more alcohol use, not less.

But the core part of the WHO Global Alcohol Strategy is five cost-effective, high-impact interventions directed at reducing the availability and sale of alcohol, either overall or to particular vulnerable groups, and at building up management, leadership and information systems to direct and support these interventions. The success of these evidence-based public health strategies is therefore a direct threat to the alcohol industry’s interest in maintaining and increasing sales.

In four waves of market concentration over the last decades, Big Alcohol has accumulated extensive market, financial and political power. A few major corporations, operating transnationally, dominate the alcohol market, especially the beer but also the liquor and wine market. They have the financial and political power to derail, delay, obstruct or undermine public policies that protect Human Rights and that promote sustainable development, social justice and public health; they can undermine the public discourse about the real harm of alcohol; and they can buy the science they prefer.

The alcohol industry, similar to Big Tobacco, utilizes an array of tactics and strategies to promote their products in order to maximize profits for their shareholders. Therefore, there is necessarily an inherent conflict of interest between their goals of promoting health damaging products and the goals of public health.

In the battle between public health and private profits there is now a vast track record of the alcohol industry obstructing, derailing, delaying or watering down cost-effective, high-impact, and evidence-based public health policies – such as in the WHO SAFER technical package – that are antithetical to their economic interests. 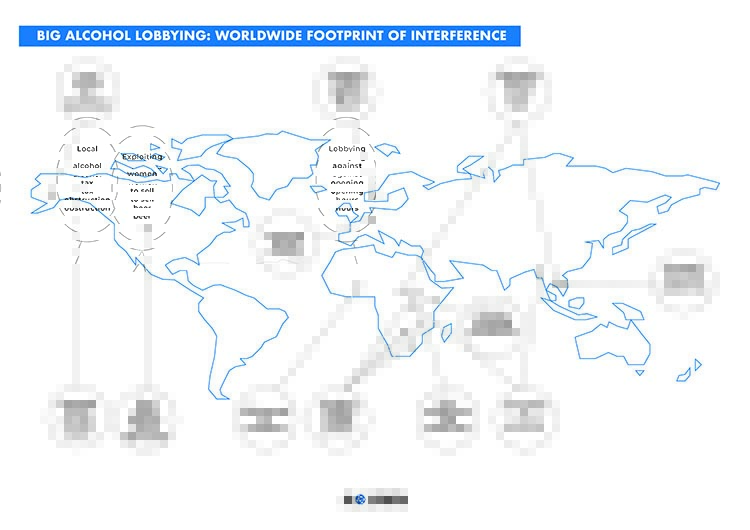 The fundamental conflict of interest is inherent in the products, in the business model and practices and in the strategies chosen by Big Alcohol executives and shareholders to pursue and maximise its profits.

They target and rely on under-age alcohol users as well as people with heavy alcohol use and alcohol use disorders for their profit thirst and thus ruthlessly put them in harms way.

For further reading from the blog portal: