Despite the massive harm from alcohol in Germany yet there is no policy change. 7000 professional drivers with alcohol use disorder drive on the roads daily. Despite this harm the government is not willing to increase the 16-year legal age limit for alcohol purchase…

Despite the massive harm from alcohol in Germany there is no policy change in sight. For instance, 7000 professional drivers with alcohol use disorder drive on the roads daily. Despite this harm, especially harm to others than the alcohol users, the German government continues to be unwilling to increase the 16-year legal age limit for alcohol purchase and to implement other alcohol policy measures.

40% of the professional drivers on German roads come from Eastern Europe. German drivers caught with high BAC levels have to undergo a medical-psychological examination and may lose their driver’s license. However for drivers from Eastern Europe the police can only take keys and papers from drivers till they are sober again.

As the World Health Organization (WHO) reports total alcohol per capita consumption in Germany in 2016 was 13.4 litres, this is an increase from 2010 and way above the average for the region. 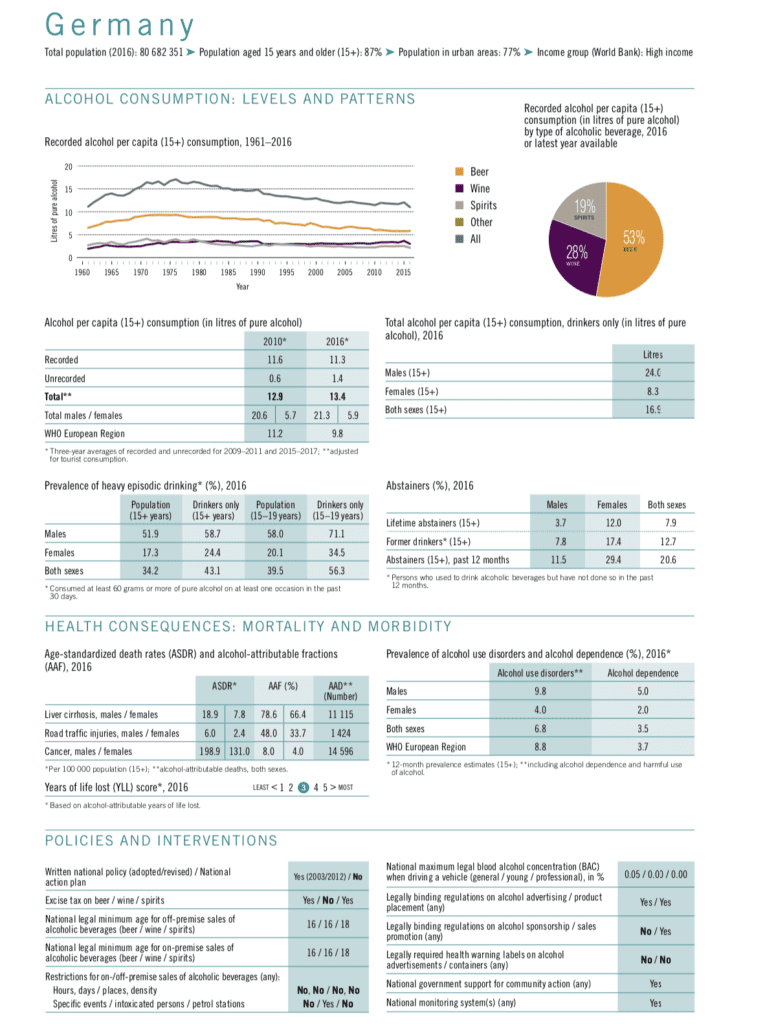 Out of those who use alcohol, over half the youth (56.3%) between 15 to 19 years of age and over one-third (43.1%) of all adults over 15 years of alcohol engage in heavy episodic (binge) alcohol consumption.

The high level of consumption and binge alcohol use is leading to significant harm in the country.

German men are even more affected by alcohol harm with 9.8% suffering from alcohol use disorders.

The harm from alcohol in Germany, including specifically for youth, is significant and apparent. Despite this the Federal government says they see no reason to increase the legal age for alcohol to 18 years, in response to a Parliamentary question by the Green Party. The government has cited that since the alcopop tax in 2004 “regular” consumption of alcohol among adolescents and youth between 12 to 17 years has reduced.

However it is obvious that alcohol using youth in the country face significant harm as over half of them binge on the substance. Binge alcohol use has been found to be related to alcohol problems later on in life. A study also found that in 2017, 21,700 children and youth between the age of 10 and 20 years were hospitalized due to alcohol poisoning.

Whatever level of alcohol that the government considers “regular” is evidently harming the youth of the country and putting lives at risk.

The government is relying on information campaigns to encourage “moderate” alcohol use instead of strengthening population-level policy measures to effectively prevent and reduce alcohol harm. Such campaigns are similar to the campaigning done by the alcohol industry funded organizations and their corporate social responsibility projects and are found to be ineffective in reducing actual alcohol harm. Besides, it has already been scientifically proven there is no safe level of alcohol consumption.

Therefore, the Federal government needs to focus on alcohol policy control such as the WHO recommended best buy policies which include increasing the legal minimum age for alcohol consumption to drive down alcohol availability and effectively prevent and reduce alcohol harm in the country.

RTL.de: ‘7,000 alcoholic truck drivers are on the roads of Germany every day‘