The report was published by the UN Inter-Agency Task Force for Financing Development. It discusses methods in which sustainable development can be financed and the resources necessary so that the world can achieve the Sustainable Development Goals (SDGs) by 2030.

In the last report published in 2019, alcohol taxation was not given the priority it should have had considering its substantive potential to generate revenue for development financing. In this year’s report alcohol taxation has been completely omitted from the report.

Alcohol is an obstacle to development 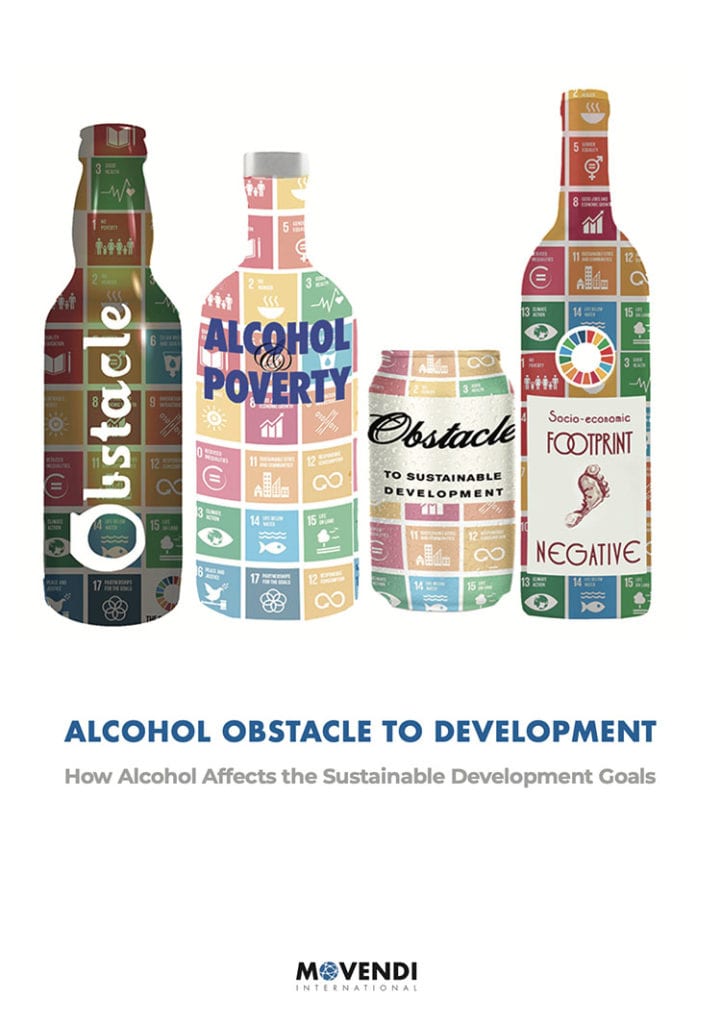 Alcohol is an obstacle to achieving 14 out of 17 Sustainable Development Goals (SDGs) and 54 of 169 targets. It is a major obstacle to sustainable human development.

Movendi International has published a report detailing state-of-the-art evidence on how alcohol hinders reaching the SDGs by 2030. Some basic facts from the book:

Alcohol Taxation is a Key Tool to Finance Development

Alcohol taxation, when employed in an evidence-based manner, reaps positive effects for a number of Sustainable Development Goals according to the report on alcohol taxation published by Movendi International and the East African Alcohol Policy Alliance (EAAPA).

The report finds that 10 out of the 17 Sustainable Development Goals – such as eradication of poverty and hunger, gender equality, good health and well being, quality education, or economic growth – are positively impacted by alcohol taxation measures.

In fact, alcohol taxation is a key tool to tackle alcohol as obstacle to the SDGs.

Employing evidence-based alcohol taxation reaps significant benefits across (at least) 10 of 17 SDGs. There is strong evidence that raising alcohol taxes is an effective strategy for reducing alcohol consumption and related harms.

Even though United Nations Secretary General Guterres asserts in his forward that “Public health spending must increase…” the Financing Development Report 2020 omits alcohol taxation even in these key chapters where it was reasonable to expect the inclusion of alcohol taxation for development.

For instance, the chapter about domestic resource mobilization is a missed opportunity to direct the spotlight on the potential of alcohol taxation.

Raising taxes on alcohol to 40% of the retail price could have [a big] impact. Estimates for 12 low-income countries show that [alcohol] consumption levels would fall by more than 10%, while tax revenues would more than triple to a level amounting to 38% of total health spending in those countries. Even if only a portion of the proceeds were allocated to health, access to services would be greatly enhanced,” according to the World Health Report 2010.

A disproportionate share of the health and economic costs of alcohol falls on poorer households. But they are more responsive to increased prices than richer households. Therefore, alcohol taxes disproportionately benefit the poor through reducing alcohol use and related harm, such as having fewer sick days, longer and more productive working lives, and spending less on health care.

Increased resources from alcohol taxes can be invested in programs that favor the poor, in this way further strengthening the benefits.

Prioritising Action On Alcohol For Health And Development

Norwegian Minister of Health, Bent Høie, noted that the new strategy builds upon WHO’s normative work on NCDs, and particularly the 16 WHO-recommended “Best Buys” – interventions for the prevention and control of NCDs.

If these were implemented, over 8 million lives could be saved annually by 2030; there would also be a total savings of $US 7 trillion in low- and middle-income countries over the next 15 years,” he said, citing WHO data.

The 2020 Financing for Development Report should have included this new Norwegian strategy as example for how development assistance could be spent well to actually tackle the biggest obstacles to sustainable human development.