The government of Botswana has announced its decision to lift the ban on alcohol sponsorship and partnerships between sporting codes and the alcohol industry. It’s a stunning move that reverses the modern alcohol policy course of the country and puts children and youth in alcohol harm’s way…

The government of Botswana has announced its decision to lift the ban on alcohol sponsorship and partnerships between sporting codes and the alcohol industry. It’s a stunning move that reverses the modern alcohol policy course of the country and puts children and youth in alcohol harm’s way.

When the ban on alcohol sports sponsorship was introduced in Botswana, the alcohol industry had set up a pervasive network of sponsorship deals making alcohol promotions ubiqitous across sports in Botswana, exposing children and youth to alcohol marketing.

The Ian Khama administration imposed a ban on alcohol companies from advertising and sponsoring sporting activities to protect children and youth and to help prevent and reduce alcohol harm in Botswana. The country’s then sole alcohol beverages brewer, Kgalagadi Breweries Limited (KBL) used to sponsor several sporting programmes in the country.

Now the Ministry of Youth Empowerment, Sport and Culture Development (MYSC) has permitted for the local sporting codes to pursue sponsorship from the alcohol industry.

In the absence of alcohol sports sponsorship, the government had stepped in to support sporting codes through the Botswana National Sports Commission (BNSC). But also due to the consequences of the coronavirus crisis the government’s resources are extremely challenged and the decision was taken to lift the ban on alcohol sports sponsorship. Consumption of alcoholic beverages at sport events has also been permitted.

It is an example of short-sighted policy making to the detriment of public health, sustainable development and poverty eradication in Botswana.

Sedimo added that the decision is also a welcome development especially in a time of Covid-19 pandemic when most of governments funding is diverted to fighting the scurge. He encouraged sporting codes which have the ability to attract sponsorship from the alcohol industry to freely pursue them without necessarily needing to first engage government or BNSC.

The weakening of Botswana’s alcohol marketing regulations is a short-sighted and ill-informed policy decision. The country’s alcohol policy system used to be one of the most modern, evidence-based system in the African region, including many of the alcohol policy best buy solutions recommended by the World Health Organization (WHO), such as: 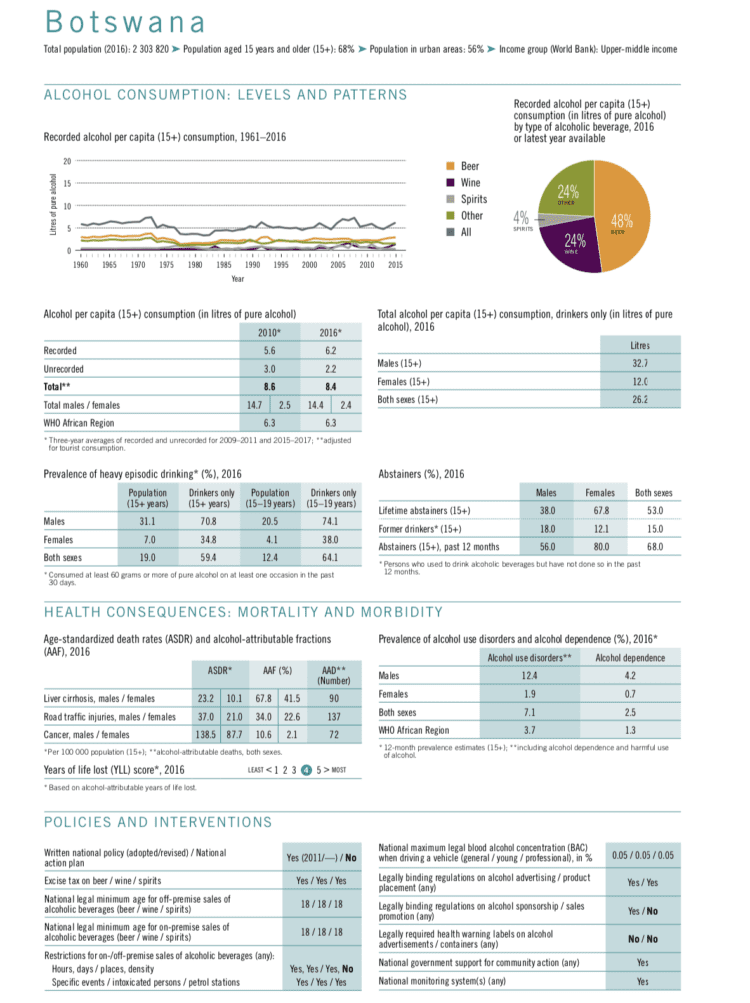 Alcohol harm was and is pervasive in Botswana, illustrating the importance of alcohol prevention and control.

Regarding years of life lost due to alcohol, the country ranks among the countries in the world with the highest burden. More than 12% of men in Botswana have an alcohol use disorder. And more than 70% of young males who consume alcohol engage in heavy episodic alcohol use. Overall, per capita alcohol use of thsoe who consume alcohol is staggering at 26.2 liters of pure alcohol per year. Botswana’s total alcohol consumption is higher than the regional average in the WHO African region.

Progress on alcohol harm in the country is now in jeopardy due to the weakening of the alcohol marketing regulations.

As part of the WHO technical package for alcohol policy, called SAFER, it is recommended for governments to “Enforce bans or comprehensive restrictions on alcohol advertising, sponsorship, and promotion”.

The WHO writes that bans and comprehensive restrictions on alcohol advertising, sponsorship and promotion are impactful and cost-effective measures to prevent and reduce alcohol harm.

Reducing the impact of marketing, particularly on young people and adolescents, is an important consideration in reducing [alcohol harm]. Alcohol is marketed through increasingly sophisticated advertising and promotion techniques, including linking alcohol brands to sports and cultural activities, sponsorships and product placements, and new marketing techniques such as e-mails, SMS and podcasting, social media and other communication techniques. The transmission of alcohol marketing messages across national borders and jurisdictions on channels such as satellite television and the Internet, and sponsorship of sports and cultural events is emerging as a serious concern in some countries.”

It is clear that the government’s decision to permit and encourage alcohol sports sponsorship and alcohol sales during sport events in Botswana is putting children and youth in harm’s way.

The WHO says for instance:

The exposure of children and young people to appealing marketing is of particular concern, as is the targeting of new markets in developing and low- and middle-income countries with a current low prevalence of alcohol consumption or high abstinence rates. Both the content of alcohol marketing and the amount of exposure of young people to that marketing are crucial issues. A precautionary approach to protecting young people against these marketing techniques should be considered.”

The WHO highlights in the latest Global Alcohol Status Report (page 109) the modern and evidence-based alcohol taxation system in the country – one of the best in Africa.

Since attaining independence in 1966, Botswana has had an alcohol consumption pattern marked by high levels of both alcohol abstention and heavy episodic alcohol use. With HIV/AIDS prevalence rates as high as 18%, the National AIDS Coordinating Agency (NACA) developed a position paper in 2002 linking alcohol with HIV infection. The following year, national frameworks identified alcohol intoxication as a risk factor for exposure to HIV, and alcohol continues to be an obstacle to effective HIV prevention efforts.

Alcohol excise duties were first developed through the Southern African Customs Union (SACU). After a long history without formal alcohol policies at the national level, the Ministry of Trade and Industry in Botswana prepared a regulatory framework referred to as Liquor Regulations in 2005. Three years later, tax levies were introduced in the Control of Goods (Intoxicating Liquor Levy) Regulations, 2008. These regulations proposed a 70% alcohol levy on all domestically produced intoxicating liquors, with the aim of reducing consumption specifically among young people. At the same time, revenue collected from the levy would be invested in efforts to prevent and reduce alcohol harm.

In response, the alcohol industry argued that the levy had made imported alcohol more affordable than domestic alcohol, causing a shift in consumer preferences, and that the regulations would thus result in harm to the business sector and job losses. As a result, the levy was reduced to 30%. However, the alcohol tax was increased to 40% two years later under the Levy on Alcohol Beverages Fund (Amendment) Order, 2010.

Traffic crash rates fell by 12% seven months after the first alcohol excise tax and by another 12% five months after the 2010 levy increase; Botswana increased the alcohol levy by a further 10% to reach 55% in 2015 to prevent the incidence and consequences of alcohol abuse. This measure also increased the scope of the tax to include imported alcoholic beverages and production costs for the first time.

It is clear that the alcohol policy best buys are effective and impactful in protecting populations from alcohol harm.