Posted on July 7, 2020 in
Alcohol Norm, Alcohol's Harm To Others, Policy, Prevention, Research

Lack of regulation leaves door open to harmful digital marketing of alcohol, according to the new report “Alcohol marketing in the WHO European Region”. However, not all pricing policies are equal in their effectiveness or impact on alcohol harm and socioeconomic inequalities fueled by alcohol, says WHO Europe in the new report.
The new “update report on evidence and recommended policy actions” summarizes advances in the evidence and progress made since 2012 in the area of alcohol marketing in the WHO European Region. At the same time, it demonstrates the need for improved alcohol marketing policies that are capable of effectively regulating the quickly evolving digital marketing methodologies employed in the commercial sector to market alcoholic beverages…

Lack of regulation leaves door open to harmful digital marketing of alcohol, according to the new report “Alcohol marketing in the WHO European Region”. However, not all pricing policies are equal in their effectiveness or impact on alcohol harm and socioeconomic inequalities fueled by alcohol, says WHO Europe in the new report.

The new “update report on evidence and recommended policy actions” summarizes advances in the evidence and progress made since 2012 in the area of alcohol marketing in the WHO European Region. At the same time, it demonstrates the need for improved alcohol marketing policies that are capable of effectively regulating the quickly evolving digital marketing methodologies employed in the commercial sector to market alcoholic beverages. 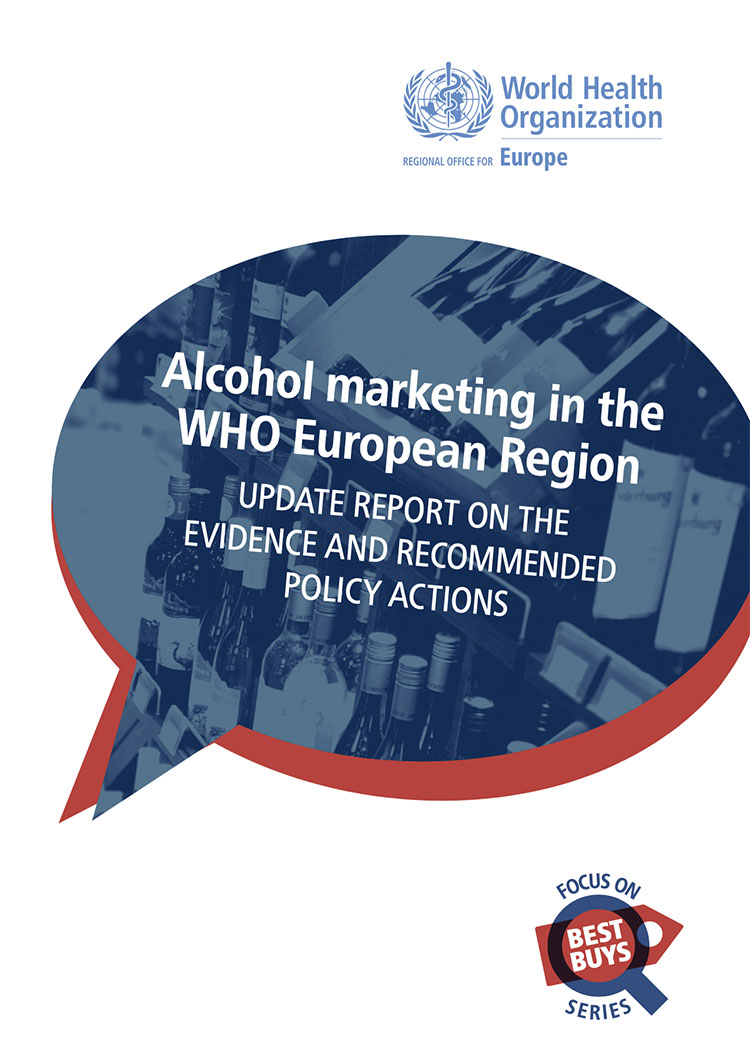 According to a newly published report, alcohol marketing is adapting to new realities faster than current legal regulations across the WHO European Region, with the alcohol industry using opportunities offered by digital platforms to sell their products in a largely unregulated market. The new report explains how innovative online advertisement techniques can target consumers – including children and adolescents – precisely to promote alcohol use.

There has been a recent growth in citizens’ exposure to commercial messages, and the alcohol industry continues to increase spending on marketing. Approximately US$ 1 trillion is spent on alcohol advertising globally each year, with an ever-increasing number of promotional campaigns in online media; for example, two of the world’s largest alcohol producers – AB InBev and Diageo – report spending 15% of their annual global sales on marketing.

At the same time, according to the latest WHO data, less than a quarter of all Member States of the Region have at least some marketing bans for the internet. Even fewer countries have implemented similar restrictions for social media, despite bans or comprehensive restrictions of alcohol advertising being among the most cost-effective measures to reduce alcohol consumption and associated harms.

Although most countries of the Region have some form of marketing regulation, very few have statutory bans that prohibit or at least limit alcohol promotion, advertising and sponsorship.

In contrast to the work on tobacco control, there is no international or regional framework instrument with guidelines for implementation to underlay and support initiatives to regulate alcohol advertisement and promotion, including digital marketing. This is important since the available evidence suggests that alcohol industry self-regulation of their own marketing practices has no meaningful impact on public health and that investment in digital platforms has increased, targeting new consumers.

Existing regulation across the Region applies for the most part to traditional channels of marketing, such as advertising on television, radio and print media. It also remains largely fragmented, for instance prohibiting one type of alcoholic beverages for a certain media type, while not regulating others. Online marketing of alcohol is by far the least-regulated field, although a considerable shift has taken place from traditional channels to the digital landscape.

This situation needs to be changed, given that alcohol consumption levels in the WHO European Region are the world’s highest. 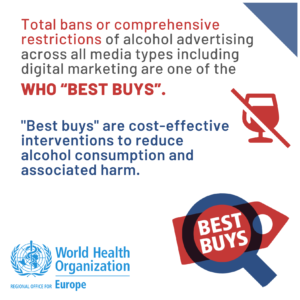 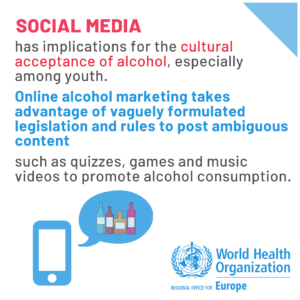 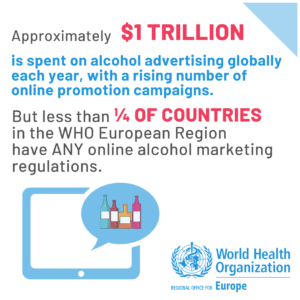 In 2016, every 10th death in the Region was attributed to alcohol.

Alcohol is not only a leading risk factor for noncommunicable diseases like cancer and heart conditions, but also contributes to a considerable number of infectious diseases, mental health issues, road traffic crashes, injuries, violent incidents and crimes.

Evidence suggests that exposure to alcohol marketing is associated with changes in alcohol-related knowledge, attitudes and behaviour, including among youth.

The association between exposure to alcohol marketing and levels of alcohol consumption and harm is well established, and this new WHO publication explains how countries of the Region can tackle the impact of evolving advertising techniques on people’s health.

Exposure to Digital Alcohol Marketing and Alcohol Use

With the help of new digital technology, companies can recruit consumers quickly and cheaply. The youngest users of digital platforms can be reached through app based social platforms. In these, native marketing blends into popular games or social media sites featuring vloggers and influencers.

Evidence points towards the fact that alcohol advertising exposure is positively associated with alcohol consumption behaviour, including among young people. A systematic review of studies covering 35,219 participants from Europe, Asia and North America, below the relevant minimum legal purchase age for alcohol showed a consistent correlation between marketing exposure and the level of youth alcohol consumption, including alcohol initiation as well as binge alcohol use.

The last decade has seen a boom in online marketing technologies. Alcohol marketing is actively exploring the new grounds of the internet and social media, given that the existing legislation and rules for online platforms are vaguely formulated all over the Region.

According to the WHO report, the nature of social media communities has implications for the cultural acceptance of alcohol, especially among youth. New social media marketing interacts and engages, encouraging consumers to like posts, reply to questions, tag their friends and even generate their own content that serves the same promotional goals. In other words, social media users can unknowingly act as alcohol promoters themselves.

Alcohol marketing has become a global and multifactor issue. Today, it transcends borders and uses the diverse digital landscape to spread its messages. Online promotion techniques can even reach consumers in regions where alcohol-related content is prohibited by national law. The global scope of alcohol marketing, with blurred boundaries between advertiser and consumer, requires a broadening of the scope of marketing regulation and an update of current legislation, advises the WHO report.

Regulating alcohol marketing: what can the European Region do?

It is clear that action is urgently needed since existing legislation and codes of conduct do not match the changing nature of the advertising methods employed in the commercial sector. Social media and other online and app-based marketing techniques can, for example, reach consumers in regions where alcohol-related content is prohibited in national law.

When properly and efficiently enforced, alcohol marketing restrictions have been shown to constitute a cost-effective strategy for preventing and reducing alcohol harm, costing less than US$ 100 per healthy life year gained in low-income countries and less than US$ 500 in high-income countries.

Increased awareness of the extensive challenges posed by online marketing, and political commitment to deal with them, are needed more than ever. Digital marketing should be included in regulatory frameworks – as thousands of posts and videos are published on a multitude of platforms daily. There is an urgent need to develop a protocol to help distinguish native advertising, user-generated content and other commercial messages that may be difficult to understand or interpret, especially by younger consumers.

The positive side of global alcohol marketing campaigns is that they can unite countries. The Member States of the WHO European Region share common interests in producing knowledge and effective controls that can serve public health work across borders.

The “Alcohol marketing in the WHO European Region” update report has been prepared by WHO/Europe’s Alcohol and Illicit Drugs Programme and the WHO European Office for the Prevention and Control of Noncommunicable Diseases.

Alcohol Marketing and Adolescent and Young Adult Alcohol Use Behaviors: A Systematic Review of Cross-Sectional Studies

Alcohol Marketing and Adolescent and Young Adult Alcohol Use Behaviors