We hope that our joint letter finds you well.

It is our privilege to address you today by way of this letter, on the occasion of International Children of Alcoholics Week.

Children of alcoholics are the forgotten victims of someone else’s alcohol use. All too often they do remain invisible and alone: neglected by their parents, overlooked by teachers, down prioritized and ignored by governments and authorities.

Children growing up with parents who struggle with alcohol problems are a Human Rights crisis of tremendous proportions. CoAs are greatly exposed to various types of harm:

In fact, they keep fuelling a Human Rights crisis that sees CoAs deprived of the enjoyment of eight Human Rights, such as (for detailed list, see Annex I):

Having on mind the sheer extent of the problem, the severity of the problem and the impact of the problem not just on the present but on the future, we hold that it is essential to understand that Sustainable Development and the achievement of the Agenda2030 are not possible without comprehensive efforts to help and support children of alcoholics and to ensure that their number decreases in the coming years.

The fact that hundreds of millions of children grow up exposed to neglect and abuse due to their parents’ alcohol problems is a Child Rights issue, a public health issue, a social development issue, a poverty eradication and sustainable development issue.

In this spirit, we call on the United Nations Human Rights Office of the High Commissioner to put the situation of children of alcoholics on their agenda. And we urge you to explore ways to make the Best Interest Principle, enshrined in Art. 3 of the Convention on the Rights of the Child work for children of alcoholics.

Using the collaborative synergies of the Sustainable Development Goals and Agenda2030, we urge the UN system to exercise leadership and seriously explore ways forward to address and improve the situation of millions of children around the world. 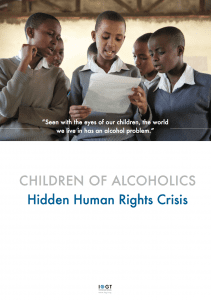