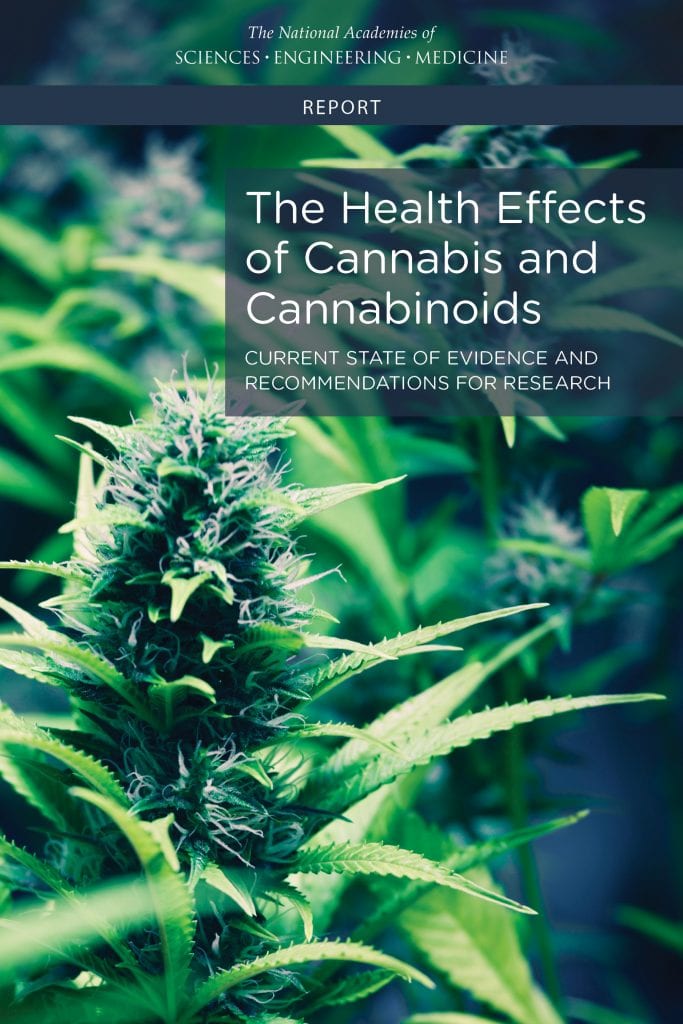 The Health Effects of Cannabis and Cannabinoids: The Current State of Evidence and Recommendations for Research

In one of the most comprehensive studies of recent research on the health effects of recreational and therapeutic cannabis use, a new report from the National Academies of Sciences, Engineering, and Medicine offers a rigorous review of relevant scientific research published since 1999.

This report summarizes the current state of evidence regarding what is known about the health impacts of cannabis and cannabis-derived products, including effects related to therapeutic uses of cannabis and potential health risks related to certain cancers, diseases, mental health disorders, and injuries.

Areas in need of additional research and current barriers to conducting cannabis research are also covered in this comprehensive report.

Significant changes have taken place in the policy landscape surrounding cannabis legalization, production, and use. During the past 20 years, 25 states and the District of Columbia have legalized cannabis and/or cannabidiol (a component of cannabis) for medical conditions or retail sales at the state level and 4 states have legalized both the medical and recreational use of cannabis. These landmark changes in policy have impacted cannabis use patterns and perceived levels of risk.

However, despite this changing landscape, evidence regarding the short- and long-term health effects of cannabis use remains elusive. While a myriad of studies have examined cannabis use in all its various forms, often these research conclusions are not appropriately synthesized, translated for, or communicated to policy makers, health care providers, state health officials, or other stakeholders who have been charged with influencing and enacting policies, procedures, and laws related to cannabis use.

Unlike other controlled substances such as alcohol or tobacco, no accepted standards for safe use or appropriate dose are available to help guide individuals as they make choices regarding the issues of if, when, where, and how to use cannabis safely and, in regard to therapeutic uses, effectively.

Shifting public sentiment, conflicting and impeded scientific research, and legislative battles have fueled the debate about what, if any, harms or benefits can be attributed to the use of cannabis or its derivatives, and this lack of aggregated knowledge has broad public health implications. The Health Effects of Cannabis and Cannabinoids provides a comprehensive review of scientific evidence related to the health effects and potential therapeutic benefits of cannabis.

This report provides a research agenda—outlining gaps in current knowledge and opportunities for providing additional insight into these issues—that summarizes and prioritizes pressing research needs.

One of the therapeutic uses of cannabis and cannabinoids is to treat chronic pain in adults.  The committee found evidence to support that patients who were treated with cannabis or cannabinoids were more likely to experience a significant reduction in pain symptoms.  For adults with multiple sclerosis-related muscle spasms, there was substantial evidence that short-term use of certain “oral cannabinoids” – man-made, cannabinoid-based medications that are orally ingested – improved their reported symptoms.  Furthermore, in adults with chemotherapy-induced nausea and vomiting, there was conclusive evidence that certain oral cannabinoids were effective in preventing and treating those ailments.

Evidence suggests that cannabis use prior to driving increases the risk of being involved in a motor vehicle accident.  Furthermore, evidence suggests that in states where cannabis use is legal, there is increased risk of unintentional cannabis overdose injuries among children.  In one study, ingestion was the most common route of unintentional pediatric exposure, accounting for 78 percent of all incidents.  Another study reported that from 2000 to 2013, the annual rate of poison center calls related to cannabis exposures among children younger than 6 years of age was 2.82 times higher in states that had legalized medical cannabis prior to 2000 than in states where medical cannabis remained illegal as of 2013.  The committee called for more research to determine whether and how cannabis use is associated with death or with occupational injury.

The committee said that more research is needed to determine whether and how cannabis use is associated with heart attack, stroke, and diabetes.  However, some evidence suggests that cannabis smoking may trigger a heart attack.

The evidence reviewed by the committee suggests that smoking cannabis on a regular basis is associated with more frequent chronic bronchitis episodes and worse respiratory symptoms, such as chronic cough and phlegm production, but quitting cannabis smoking is likely to reduce these conditions.  The committee stated that it is unclear whether cannabis use is associated with certain respiratory diseases, including chronic obstructive pulmonary disease, asthma, or worsened lung function.

There is a lack of data on the effects of cannabis or cannabinoid-based therapeutics on the human immune system, as well as insufficient data to draw overarching conclusions concerning the effects of cannabis smoke or cannabinoids on immune competence, the committee stated.  There is also insufficient evidence to support or refute a statistical association between cannabis or cannabinoid use and adverse effects on immune status in individuals with HIV.  Nevertheless, limited evidence suggests that regular exposure to cannabis smoke may have anti-inflammatory activity.

The evidence reviewed by the committee suggests that cannabis use is likely to increase the risk of developing schizophrenia, other psychoses, and social anxiety disorders, and to a lesser extent depression.  Alternatively, in individuals with schizophrenia and other psychoses, a history of cannabis use may be linked to better performance on learning and memory tasks.  Heavy cannabis users are more likely to report thoughts of suicide than non-users, and in individuals with bipolar disorder, near-daily cannabis users show increased symptoms of the disorder than non-users.

Cannabis Use and the Abuse of Other Substances

The committee found limited evidence that cannabis use increases the rate of initiating other drug use, primarily the use of tobacco.  However, the committee found moderate evidence to suggest that there is a link between cannabis use and the development of substance dependence and/or a substance abuse disorder for substances including alcohol, tobacco, and other illicit drugs.

The committee found that learning, memory, and attention are impaired after immediate cannabis use.  Limited evidence suggests that there are impairments in cognitive domains of learning, memory, and attention in individuals who have stopped smoking cannabis.  In addition, there is limited evidence to suggest that cannabis use is related to impairments in subsequent academic achievement and education as well as social relationships and social roles.  Adolescence and young adulthood are when most youth begin to experiment with substances of abuse, including cannabis, and it is during these periods that the neural layers that underlie the development of cognition are most active.  The committee also found limited evidence of an association between cannabis use and increased rates of unemployment and low income.

Smoking cannabis during pregnancy is linked to lower birth weight in the offspring, some evidence suggests. However, the relationship with other pregnancy and childhood outcomes is unclear.