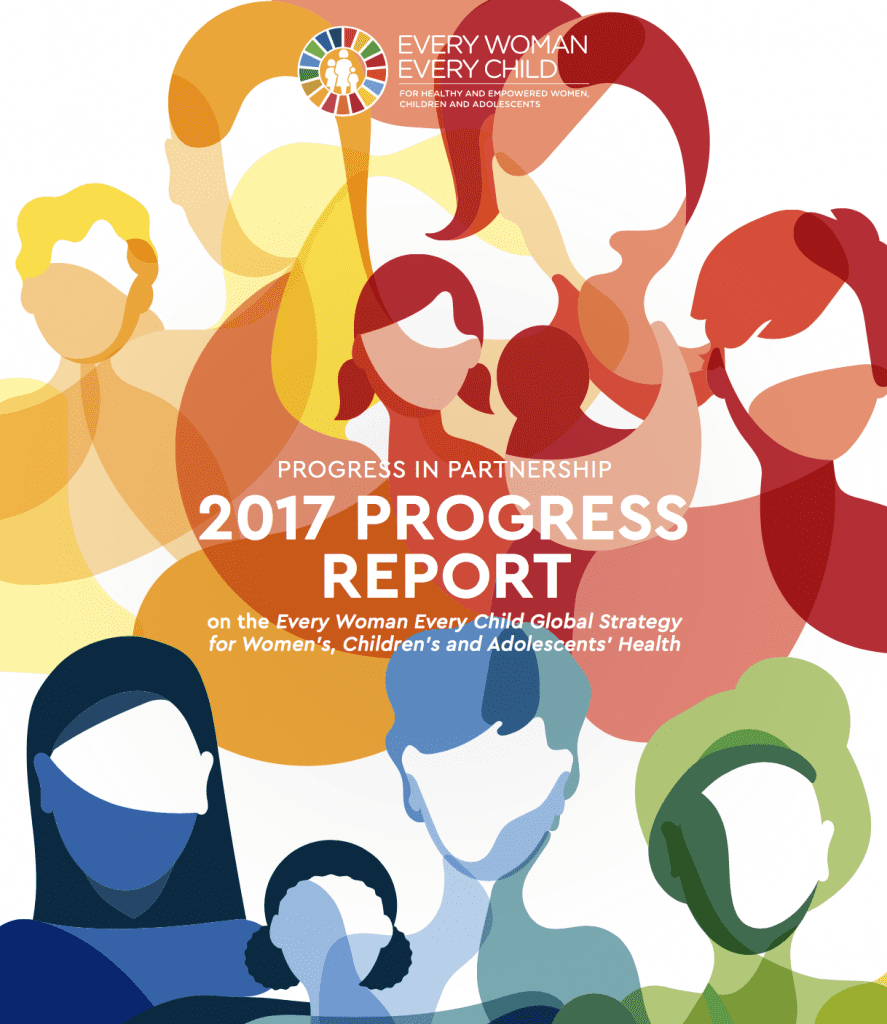 Progress Report on the Every Woman Every Child Global Strategy for Women’s, Children’s and Adolescents’ Health

The first Progress Report on the Every Woman Every Child Global Strategy for Women’s, Children’s and Adolescents’ Health, “Progress in Partnership,” was launched on Tuesday, 18 July, in the margins of the High-Level Political Forum on Sustainable Development (HLPF).

The report is the result of a long and careful process of consultation among EWEC partners.

The Progress Report is a critical tool for accountability and advocacy and provides a snapshot of achievements by countries and partners under the Every Woman Every Child Global Strategy, highlighting the power of partnership to accelerate progress in a complex and evolving development landscape,” said Helga Fogstad, Executive Director of The Partnership for Maternal, Newborn & Child Health.

To provide the latest status on progress towards the targets of the Global Strategy, the report highlights the latest available country data on 60 indicators, 34 of which come directly from the SDGs and an additional 26 taken from existing indexes and processes. This data, from WHO and other UN agencies, is included in an open-access online data portal launched in May 2017 on the World Health Organization’s Global Health Observatory website.

In a new development era, the Every Woman Every Child movement serves as a proven platform for transformative global partnership, uniting efforts across sectors to realize an ambitious and integrated agenda for women, children and adolescents, following the roadmap set by the Global Strategy for Women’s, Children’s and Adolescents’ Health launched by the UN Secretary-General in 2015,” said Nana Kuo, Senior Manager, Every Woman Every Child Team at the Executive Office of the UN Secretary-General.

Since 2010, partners have invested more than $45 billion in the EWEC program.

Globally, the health and well-being of women, children and adolescents are improving faster than at any point in history, even in the poorest nations. The transformation is due in great measure to the interventions promoted by one of the most successful global multi-stakeholder partnerships in history, Every Woman Every Child.

This massive public-private effort, launched by the United Nations in 2010, is still gaining momentum. In total, it has gathered nearly 650 commitments from hundreds of partners worldwide. But, in the past two years alone, more than 200 commitments have been made, about one-third of the total.

To respond to the Sustainable Development Goals (SDGs) in 2015, the UN launched the Every Woman Every Child Global Strategy for Women’s, Children’s and Adolescents’ Health (2016-2030), building on momentum under the movement’s first Global Strategy (2010- 2015) and aligning with the SDGs. The Global Strategy is a detailed roadmap for countries to begin implementing the SDGs, reducing inequities, strengthening fragile health systems and fostering multi-sector approaches to end all preventable deaths of women, children and adolescents and ensure their health and well-being.

Major reasons for the current success of Every Woman Every Child are:

Some of the major problem areas and barriers that the Every Woman Every Child movement is seeking to address:

Adolescent health remains a key concern, particularly because lack of earlier focus on this age group has resulted in less rapid progress compared with areas such as maternal and child health. In addition, there are large gaps in adolescent health data. Girls under age 15 account for 2 million of the 7.3 million births to adolescent girls under age 18 every year in developing countries. Maternal mortality is the leading cause of death for older adolescent girls, with self-harm being the second. For boys aged 15 to 19, road injuries and interpersonal violence are the leading causes of death.

Child marriage has gained greater attention in recent years. The percentage of girls marrying before age 15 declined from 12% to 8%, comparing the early 1980s with 2014. Early marriage remains a chief cause of early pregnancies: 19% of girls in developing countries become pregnant before the age of 18.

Violence against women and children is alarming. Worldwide, almost one third of all women who have been in a relationship have experienced physical and/or sexual violence by their intimate partner. Intimate partner violence often starts early in the lives of women, with 30% of adolescent girls (aged 15-19) having experienced physical and/or sexual violence by an intimate partner. In the South-East Asia region, the estimate is 43% of adolescent girls; in the Africa region, it is 40%.

To tackle such challenges, many governments are responding with powerful new ways to improve women’s, children’s and adolescents’ health and rights. These include investments, laws and policies that target the underlying determinants of health outcomes, including women’s empowerment, early childhood development, nutrition, water and sanitation, as well as peace and security.