Posted on October 9, 2019 in
Alcohol's Harm To Others, Policy, Research
Author

Finnish alcohol policy at the crossroads: The health, safety and economic consequences of alternative systems to manage the retail sale of alcohol

In this report we present empirical evidence and analyses in order to inform public discussions regarding the future of alcohol policy in Finland, with particular attention to the role of the now partial government monopoly on retail sales of alcohol.

We present estimates of the main health, social and economic consequences of alcohol consumption in Finland, applying methods developed in recent international studies. We then estimated how policies (e.g. prices, numbers of stores), alcohol consumption and then alcohol-caused harms and costs would change under two contrasting scenarios recommended as being useful comparisons by Finnish and other Scandinavian experts, from both government and academia…” write the researchers.

Finland adopts policies similar to those in neighbouring Sweden with Alko responsible for all retail alcohol sales for beverages with more than 3.5% ABV while also having fewer stores and shorter trading hours.

Finland abolishes Alko and permits the sale of all alcoholic beverages in all grocery stores.

The partial Finnish alcohol monopoly, Alko, currently manages the retail sale of 40% of all the alcohol purchased in Finland, while nearly half (46%) is sold in grocery stores and the remainder in bars and restaurants. Over the past few decades, alcohol policy in Finland has seen a series of moves from government to more private ownership of retail alcohol sales, most recently on January 1, 2018 with an increase in the permitted strength of alcohol sold in grocery stores from 4.7% to 5.5% alcohol by volume (ABV).

Recent data indicate that the downward trend in Finnish alcohol consumption recorded since 2010 reversed during 2018 with a small increase being observed, despite a simultaneous increase in alcohol taxation.

In this report the researchers present empirical evidence and analyses in order to inform public discussions regarding the future of alcohol policy in Finland, with particular attention to the role of the now partial government monopoly on retail sales of alcohol.

The researchers present estimates of the main health, social and economic consequences of alcohol consumption in Finland, applying methods developed in recent international studies. They then estimated how policies (e.g. prices, numbers of stores), alcohol consumption and then alcohol-caused harms and costs would change under two contrasting scenarios recommended as being useful comparisons by Finnish and other Scandinavian experts, from both government and academia:

Scenario 1: Finland adopts policies similar to those in neighbouring Sweden with Alko responsible for all retail alcohol sales for beverages with more than 3.5% ABV while also having fewerstoresandshortertrading hours.

Scenario 2: Finland abolishes Alko and permits the sale of all alcoholic beverages in all grocery stores.

(i) Estimating the health and social harms of alcohol use

The researchers accessed comprehensive Finnish datasets to identify alcohol-caused deaths, hospital admissions and crimes for the most recent year available. In addition to those directly recorded in medical or police records as being 100% alcohol-caused, the researchers used established international methods to estimate the likely proportions of other health or crime events that alcohol is known to have partly caused.

These methods relied on a number of Finnish datasets including national surveys of alcohol use and studies of alcohol’s involvement in violent crimes. In order to estimate lost productivity in the workplace due to alcohol we used Finnish registry data and then applied the Human Capital approach to estimate the impacts of premature deaths caused by alcohol (1-5).

This involved a) the estimation of the number of productive years of life lost from premature alcohol-caused death and disability up to the age of 65, and b) using surveys to estimate the extent of unemployment due to long-term disability.

(ii) Estimating the economic costs of alcohol use

Estimates of the economic costs of alcohol use were made for hospital admissions, crimes and years of productive life lost.

Data were obtained on typical costs of hospital admissions according to main categories of illness or injury, the costs of policing, court time and imprisonment per crime event or person and the average economic value of one year of full- time work.

Costs were calculated in terms of euros for the year 2018.

Key alcohol policies with implications for public health and safety of relevance to the operations of government alcohol monopolies were selected, from comprehensive international reviews of the impacts of policy changes both in Scandinavia and other developed countries.

The policy dimensions of outlet density, days and hours of alcohol sale, and mean and minimum prices were selected as having the most impact on consumption and related harms. The researchers used published studies from Finland and other developed countries to estimate the amount of impact each predicted policy change would be expected to have on per capita alcohol consumption, with all other factors remaining unchanged.

Two alternative methods were then employed to assess the impacts of the estimated alcohol consumption changes under each scenario on alcohol-related harms and economic costs.

Firstly, the researchers used the International Model of Alcohol Harms and Policies (InterMAHP), an open access alcohol harms estimator and policy scenario modeller, which requires local data on levels and patterns of alcohol consumption to estimate the proportion of observed hospital admissions and deaths in a country that are attributable to alcohol.

The second method relied on statistical relationships assessed between per capita alcohol consumption and key outcomes such as deaths registered as alcohol-caused, violent crimes and deaths due to injuries over the period 1995 to 2016 in Finland. This second method employed a time series analysis, with seasonal adjustments, known as Auto Regressive Integrated Moving Average, or ARIMA modelling.

Harms and economic costs from alcohol in 2018

The researchers estimated that, in 2018, alcohol consumption in Finland was responsible for

The total economic costs of these outcomes were estimated to be €1.6 billion.

This estimate does not include the costs of emergency department presentations, visits to family doctors, day surgery hospital visits or related prescription drugs or the individual quality of life losses from alcohol-caused death and disability. A summary of these economic costs by category is provided in Figure 1 below for Finland in 2018 and also under two alternative policy scenarios. 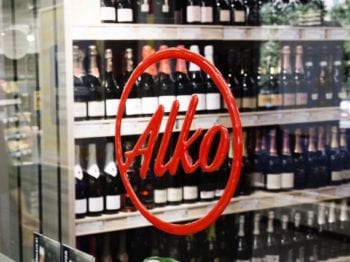 Were Finland to have employed policies more protective of public health and safety such as those in neighbouring Sweden,

By contrast, it was estimated that the full privatisation of the retail sale of alcohol in Finland would result in substantial increases in the physical availability of alcohol, such as the number of outlets and hours of sale, and reductions in both mean and minimum prices.

These increases in alcohol consumption and related harm would come at a total additional cost of €271 million.

Abolishing Alko would have resulted in

The study’s findings are consistent with the general principle that the fewer restrictions placed on any retail alcohol market, the easier and cheaper it gets for the population to obtain alcohol. This is done by driving down prices, increasing consumers’ ease of access; having the collective effect of driving up consumption. This will come at the cost of increased alcohol related harms and economic costs.

There has already been extensive deregulation of alcohol policy in Finland. However, the researchers modelling predicts that complete privatisation of alcohol sales would still result in substantial increases in serious alcohol related health and social harms, as well as in economic costs.

The two alternatives considered in the study of (i) Finland with similar alcohol policies as in Sweden, and (ii) Finland without an alcohol retail monopoly, differ by hundreds of deaths and, also, hundreds of millions of euros each year.

The researchers suggest that the public debate and decision makers in Finland take this into account when considering the future of alcohol policy in Finland.

Should it be decided by the Finnish people to reduce the harms and economic costs of alcohol use, then the following actions are suggested: