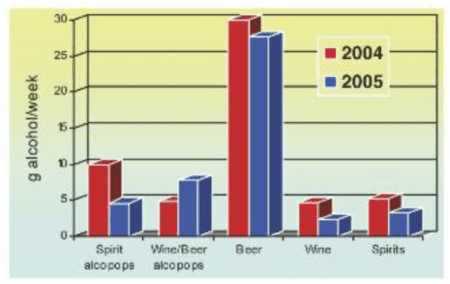 The case of Germany shows that special taxes for spirit based sweet pre-mixed drinks (alcopops) lead to reductions in sales and consumption of the specific products.

Alcopops are sweet, ready-mixed soft drinks containing between 5% and 7% alcohol by volume.

After the introduction of alcopops in the late 1990s, concerns regarding their seductive power in underage alcohol users were raised due to the sweet taste masking the alcohol content. This product seduced adolescents, especially girls, to initiate earlier onset of alcohol consumption and to increase volume of alcohol intake and frequency of binge alcohol use.

Germany introduced a specific tax on alcopops in 2004, increasing the price of sweet pre-mixed alcoholic drinks that were highly popular with youth and under-age. The policy was introduced with the intent to protect young people from alcohol harm.

Writing in the journal Addiction, the scientists found evidence that the tax clearly worked in reducing the popularity of alcopops among 12 to 17 year-olds – which had previously been found in well-established studies.

Data came from the German 2003 and 2007  cross‐sectional study of the European School Survey Project on Alcohol and other Drugs (ESPAD).

A propensity score‐matched subsample of 9th and 10th graders was used for the analyses.

While alcopop consumption declined after the alcopops tax was implemented, consumption of spirits increased. Changes in beverage preference revealed a decrease in alcopop preference and an increase in the preference for beer and spirits.

Results indicate a partial substitution of alcopops by spirits and a switch in preference to beverages associated with riskier alcohol consumption patterns.

Thus, effective alcohol policies to prevent alcohol-related problems among adolescents should focus upon the reduction of total alcohol consumption instead of regulating singular beverages.