Posted on August 21, 2017 in
Alcohol's Harm To Others, Lifestyle, Policy, Prevention, Research, Research

Globally, nearly eight out of every 1,000 children in the general population is estimated to have Fetal Alcohol Spectrum Disorder (FASD), according to a new study by the Centre for Addiction and Mental Health (CAMH)…

Global Prevalence of Fetal Alcohol Spectrum Disorder Among Children and Youth. A Systematic Review and Meta-analysis

What is the prevalence of fetal alcohol spectrum disorder among children and youth in the general population?

The prevalence of fetal alcohol spectrum disorder among children and youth in the general population exceeds 1% in 76 countries, which underscores the need for universal prevention initiatives targeting maternal alcohol consumption, screening protocols, and improved access to diagnostic services, especially in special populations.

Prevalence estimates are essential to effectively prioritize, plan, and deliver health care to high-needs populations such as children and youth with fetal alcohol spectrum disorder (FASD). However, most countries do not have population-level prevalence data for FASD.

To obtain prevalence estimates of FASD among children and youth in the general population by country, by World Health Organization (WHO) region, and globally.

Original quantitative studies that reported the prevalence of FASD among children and youth in the general population, used active case ascertainment or clinic-based methods, and specified the diagnostic guideline or case definition used were included.

Globally, FASD is a prevalent alcohol-related developmental disability that is largely preventable. The findings highlight the need to establish a universal public health message about the potential harm of prenatal alcohol exposure and a routine screening protocol.

Brief interventions should be provided, where appropriate. 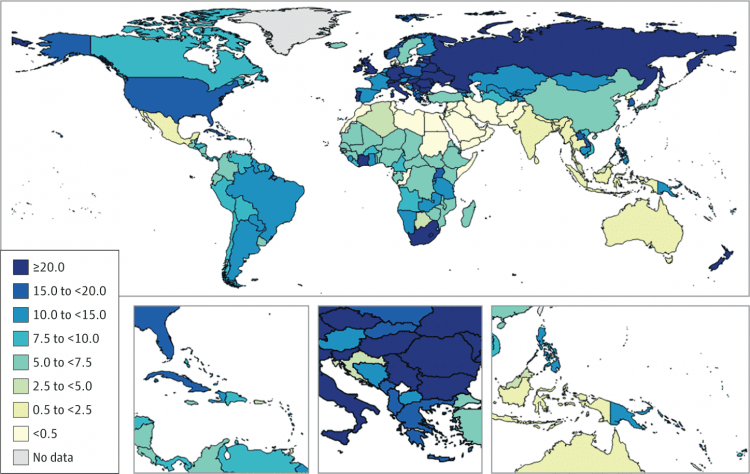 Globally, nearly eight out of every 1,000 children in the general population is estimated to have Fetal Alcohol Spectrum Disorder (FASD).

It is estimated that one out of 13 women who consumed any alcohol at any point or frequency during pregnancy delivered a child with FASD.

Most of these children will require lifelong care, so the earlier they have access to appropriate therapy and supports, the better their long-term health and social outcomes will be.”

FASD is an umbrella term that describes a range of effects that can occur in someone whose mother consumed alcohol during pregnancy.

As the fetus develops, the brain is particularly vulnerable to alcohol’s damaging effects, which can lead to physical, mental, behavioral and learning disabilities.

For many countries, these are the first-ever estimates of FASD.

There is a need for targeted screening and diagnosis for these high-risk populations, as well as interventions to prevent alcohol use among mothers of children with FASD in relation to subsequent pregnancies,” says Dr. Popova.