Health Warning Labels on Alcohol and Snacks May Reduce Consumption

Health warning labels (HWLs) using images and text to depict the negative health consequences of tobacco consumption are effective and acceptable for changing smoking-related outcomes. There is currently limited evidence concerning their potential use for reducing consumption of alcoholic drinks and energy-dense foods.

The aim of this research was to describe the potential effectiveness and acceptability of image-and-text (also known as pictorial or graphic) HWLs applied to: 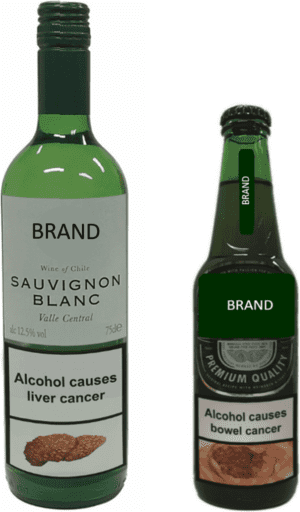 Example labelled products. The HWL was presented on beer or wine depending on participants’ stated preference. The drinks used in the study were branded, but product branding is covered here for copyright reasons. A single brand of wine or beer was used consistently across participants – to ensure effects would be due to different HWLs and not due to different brands.

Participants for the alcohol study were sampled from the UK population if they self-reported consuming either beer or wine at least once a week. A total of 5528 people were shown an image of a bottle of beer or wine labelled with one of 21 possible HWLs illustrating the adverse health consequences of alcohol consumption. Participants were asked how afraid, worried, uncomfortable or disgusted the label made them feel, to rate their desire to consume the product, and how strongly they supported putting the label on alcoholic drinks.

For both alcoholic drinks and energy-dense snacks, HWLs depicting bowel cancer generated the highest levels of negative emotional arousal and lowest desire to consume the product, but were the least acceptable.

The majority of free-text comments expressed negative reactions to HWLs on alcohol or energy-dense snacks.

Laboratory and field studies are needed to assess their impact on selection and consumption.

To our knowledge, these are the first large-scale studies in general populations to examine the potential effectiveness and acceptability of image-and-text health warning labels on alcohol and on snack foods. Prior research in this area has typically either looked at these warning labels on sugary drinks, or used smaller or less representative samples,” said Dr Gareth Hollands, the corresponding author of the study, as per Eureka Alert.

The finding that health warning labels may be judged to be relatively more acceptable to use on snack foods, than on alcohol, could be due to heightened public awareness of the health consequences of excess energy intake and obesity, particularly in children. In general, however, many of the participants expressed negative views of the possible use of such labels.”

The researchers caution that this study could not demonstrate whether negative emotional arousal and impacts on desire to consume are actually effective in changing behaviour.

Evidence is only one factor that determines the likelihood of policy changes, and so demonstrating effectiveness does not ensure any given intervention will be implemented. A key barrier to implementation is public acceptability, which is increasingly recognised for its pivotal role in the extent to which evidence is implemented into policy. As such, were there evidence for the effectiveness of these labels in reducing selection and consumption of alcohol and energy-dense snacks, their low public acceptability may justify generating evidence for other label types. For example, there is indirect evidence suggesting that text-only HWLs can reduce selection of less healthy products – albeit with smaller effect sizes – but are more acceptable. As with the development of HWLs for tobacco, text warnings could potentially be used prior to the introduction of more effective image-and-text HWLs.

As the studies were conducted online, responses may differ when HWLs are applied to physical products in real-world settings. Further studies are needed to examine the real-world potential of these labels to reduce selection and consumption of alcohol and energy-dense snacks.

This study provides important initial evidence to inform the development of image-and-text HWLs for reducing consumption of these products, including identifying HWLs that appear most potent for subsequent testing. Participants were from a broad range of ages and SEP, which increases the likelihood that results are generalisable across population groups. Furthermore, while based on comments from only a small subset of participants, the content analysis nonetheless highlighted several issues and reactions relevant to future research or any attempt to implement HWLs.