Posted on May 31, 2015 in
Alcohol's Harm To Others, Policy, Prevention, Recovery, Research, Social Justice

A new study conducted by the Center for Addiction and Mental Health (CAMH) – and funded by the Public Health Agency of Canada – about prenatal alcohol exposure makes a strong case for intervention and prevention. The study, a so called cost-of-illness study, aimed to estimate the overall burden and cost associated with fetal alcohol spectrum disorder (FASD) in Canada in 2013. FASD is a group of disorders caused by prenatal alcohol exposure…

A new study conducted by the Center for Addiction and Mental Health (CAMH) – and funded by the Public Health Agency of Canada – about prenatal alcohol exposure makes a strong case for intervention and prevention. The study, a so called cost-of-illness study, aimed to estimate the overall burden and cost associated with fetal alcohol spectrum disorder (FASD) in Canada in 2013. FASD is a group of disorders caused by prenatal alcohol exposure.

In the report entitled “The Burden and Economic Impact of Fetal Alcohol Spectrum Disorder in Canada“, released early this year CAMH details the total costs associated with FASD in Canada for 2013: approximately $1.8 billion.

The following cost drivers were included in this study:

FASD refers to a group of disorders caused by prenatal alcohol exposure, of which fetal alcohol syndrome (FAS) is the most severe form. FASD encompasses a broad range of mild to severe symptoms, including physical impairments and mental, behavioural and emotional difficulties.

Very conservative and rough estimates show that ca. 1% of Canadians – or about 355,000 people – may have FASD.

For this study, CAMH developed a comprehensive evidence-based model to calculate the economic impact of FASD in Canada.

Loss of productivity of individuals with FASD due to disability and premature mortality was the biggest contributor to the overall cost, accounting for 42% of the total burden. Another contributor was the cost of corrections, representing 30%. Health care costs made up 10%, with the remainder split among other direct costs, such as children in care, supportive housing, and special education.

“We hope that the results of this study will help people who are living with FASD to have access to a better diagnostic system and interventions to help them and their families to have a better quality of life,” says Dr. Popova.

“With appropriate support and strong social ties, people with FASD can do up to four times better on some indicators,” says Dr. Popova.

Some of the secondary problems that people with FASD might face are:

Evidence shows that children born with FASD will not grow out of the condition, and may require assistance from their families and health, community and other service providers throughout their lives. But early diagnosis and appropriate interventions can help to reduce or even avoid these secondary disabilities and enable people to work and have families.

While the researchers looked at costs for 2013, the economic impact is not a one-year incident, but a recurring cost each year.

Dr. Popova highlights the fact that the total cost of $1.8 billion is a conservative estimate because the researchers used the most conservative assumptions.

“The biggest problem is there are no data in many sectors,” says Dr. Popova. For example, the cost of corrections does not include other law-enforcement costs such as policing and trials.

“With time, we hope this work will draw the attention of many sectors of our society who are working with populations with FASD to collect data.” 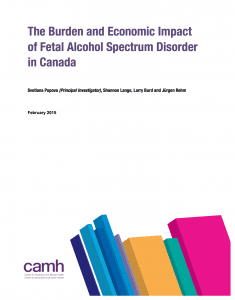 An FASD prevalence of 1% in the Canadian population is also “severely underestimated,” explains Dr. Popova, who is one of the leading investigators in a World Health Organization (WHO) research project to estimate the number of people living with FASD in Canada and five other countries.

FASD is under-represented because it is difficult to diagnose and doctors may not be appropriately trained to recognize the characteristics of FASD.

That’s partly because fetal alcohol syndrome (FAS), the most severe form of FASD, is the only officially recognized medical diagnosis at this time, creating a knowledge gap among healthcare providers.

As well, FASD may be misdiagnosed because its symptoms are similar to mental health disorders.