Almost done! Our new website is now under final development, and we are still working out some bugs and finalizing the content. If you have any issues, send an e-mail to Maik!
Disseminating latest scientific evidence in order to foster crucial insight in and understanding of the burden of harm caused by alcohol and other drugs as well as the policy measures needed for change

This page is providing a quick overview of alcohol-related harm around the world.

Movendi International strives to disseminate the latest scientific data and information in order to foster crucial insight in and understanding of the policy-making processes and supply decision-makers and opinion leaders with important evidence.

Alcohol use results in a significant health, social, economic and Human Rights burden on society at large.

Almost two-thirds of the global adult population chooses not to use alcohol in any given year.

The highest consumption levels continue to be found in the developed world, in particular in the WHO European Region (EUR) and the WHO Region of the Americas (AMR).

In the region of the Americas, alcohol is the leading risk factor for burden of disease among 26 different risk factors.

Alcohol consumption in the Americas is higher on average than the rest of the world. In particular, rates of heavy episodic alcohol use have risen in the past five years, from 4.6% to 13.0% among women and 17.9% to 29.4% among men.

Alcohol use contributed to more than 300,000 deaths in the Region—with more than 80,000 of those involving deaths that would not have occurred had alcohol not been consumed.

Alcohol use is related to more than 274 million years of healthy life lost (DALYs) in the Americas in 2012.

In the Americas in 2012, the top three causes of death and disability caused by alcohol overall were AUDs, liver cirrhosis, and interpersonal violence.

In Argentina, 68% of all cases of domestic violence are alcohol-related.

In Brazil, 60% of all cases of intimate partner violence are related to alcohol.

In rural Mexico, a $20 dollar long-lasting increase in the wife’s income is associated with a 15% decrease of the husband’s alcohol use and a 21% decrease of aggressive behaviour.

In the United States, more than 10% of children live with a parent with alcohol problems, according to a 2012 study.

About 5.7% of the Region’s population reported suffering from an alcohol use disorder. The real number is likely higher.

Alcohol is the leading risk factor for death and disability among people aged 15 to 49 years in the Americas. This is the age range in which people are typically at their most productive economically. Alcohol misuse likely results in billions of dollars of lost wages every year.

Indigenous peoples account for some 13% of the Region’s population. While major gaps exist in understanding to what extent and in what ways alcohol affects these diverse and vulnerable groups, some case studies and anecdotal reports indicate that indigenous peoples are burdened substantially by alcohol-related harms but have limited access to care and other interventions.

Most students surveyed in the Americas had had their first alcoholic beverage before the age of 14. Around 14,000 deaths of children and youth under 19 were attributed to alcohol in 2010.

The source for all facts, if not otherwise indicated is the 2015 Regional Status Report on Alcohol in the Americas, by PAHO and WHO Americas.

The lowest alcohol consumption levels in the world are found in the WHO South-East Asia Region (SEAR).

The WHO South-East Asia Region has the highest amount of adults living free from alcohol. 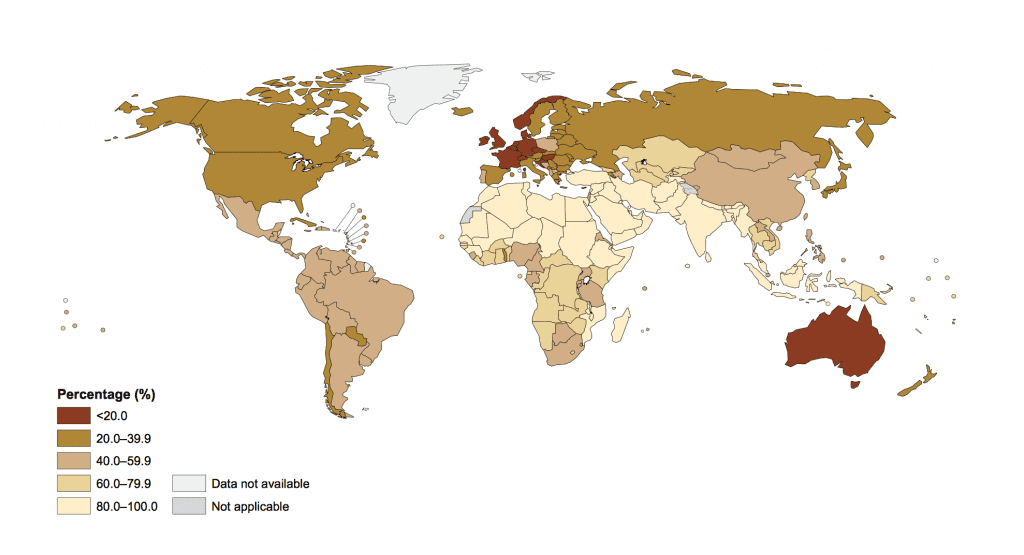 Although alcohol per capita consumption is not expected to increase in the WHO South-East Asia Region in the next ten years, the high growth rate of the adolescent and adult population will increase the number of potential consumers. Consequently, the total amount of alcohol consumed in the region might also substantially increase.

Alcohol use in India has registered a steady growth rate of 10 to 15% each year during the past decade with greater expansion seen in southern parts of India. The per capita consumption of alcohol has gone up by 106.7% in India over a 15-year period from 1970-1996. India is now one of the key markets for the global alcohol industry. Alcohol harm is increasing and placing a growing burden on Indian society.

Alcohol imposes a substantial economic burden on Thailand, with a total economic cost of $47 billion (USD) or about 1.99% of the total Gross Domestic Product (GDP).

In Thailand, alcohol is estimated to be the third most important health risk factor. 45% of deaths from traffic accidents are due to alcohol consumption.

In Sri Lanka a survey of 150 randomly selected General Practitioners showed that 80% were frequently confronted with patients who had alcohol use disorders.

The deaths from liver disease have increased by more than 10% since the 1970s.

If not otherwise specified, the source for all facts is the “Reducing harm from alcohol use in the community“
Symposium held in Bali, Indonesia, in 2007, organised by The Mental Health and Substance Abuse Unit (MHS) of the World Health Organization, Regional Office for South-East Asia.

Intermediate levels of consumption are found in the WHO African Region (AFR), while the majority of the adult population in Africa lives free from alcohol. More than 70% of Sub-Saharan African are not using alcohol in any given year.

Alcohol is the fifth largest health risk factor globally and risk factor number one in parts of Sub-Saharan Africa.

In the Republic of South Africa the estimates made of the combined tangible and intangible costs of alcohol harm to the economy reached nearly 300 billion rand or 10 to 12% of the 2009 GDP.

65% of women experiencing intimate partner violence in Uganda, Zimbabwe and South Africa reported that the perpetrator had used alcohol.

Focus group discussion in rural Rwanda show that women who are victims of domestic violence rank alcohol as number one factor.

The source for all facts, if not otherwise indicated, is the 2014 WHO Global Status Report on Alcohol.

The highest consumption levels continue to be found in the developed world, in particular in the WHO European Region (EUR) and the WHO Region of the Americas (AMR).

Alcohol’s harm to others is massive in the United Kingdom: More than half of Scots and three-quarters of people from North West England are harmed by another person’s alcohol use.

Almost ¾ of adults in Australia, i.e. 10 million people, are adversely affected by someone else’s alcohol use.

In Australia in 2011, there were 29,684 police-reported incidents of alcohol-related domestic violence, and that’s only in the four states and territories where data is available.

Nearly 88,000 people (ca. 62,000 men and 26,000 women) die from alcohol-related causes annually, making it the third leading preventable cause of death in the United States.

More than 10% of U.S. children live with a parent with alcohol problems, according to a 2012 study.

In the USA, more than half of all confirmed abuse reports and 75% of child deaths involve the use of alcohol or other drugs by parents.

In the European Union, there are at least 9 million children and young people growing up with parents who have an alcohol use disorder.

In Japan, between up to 14% of parents abusing their children have alcohol use disorders.

Europe is the region in the world with the highest alcohol consumption. Most of the multinational corporations that make up Big Alcohol have their headquarters in Europe.

Alcohol harm is widespread and a heavy burden in Europe: