Almost done! Our new website is now under final development, and we are still working out some bugs and finalizing the content. If you have any issues, send an e-mail to Maik!
Preventing under age alcohol use - facts and policies

The WHO Global Alcohol Strategy outlines no less than 10 areas for action and intervention to prevent and reduce alcohol harm. Among those are the Three Best Buys in alcohol policy (regulating availability, affordability and marketing). Area 3 deals with “Community Action”. For this area the following policy option and intervention is recommended:

Mobilizing communities to prevent the selling of alcohol to, and consumption of alcohol by, under-age and to develop and support alcohol-free environments, especially for youth and other at-risk groups.”

Scientific evidence shows that early onset of alcohol use has long-lasting negative consequences.

Research by Grant and Dawson (via NIAA) shows:

People who reported starting to [use alcohol] before the age of 15 were four times more likely to also report meeting the criteria for alcohol dependence at some point in their lives.”

The earlier young people start to use alcohol, the worse the alcohol-related consequences:

The bottom line is that society has a strong public health and social welfare interest in preventing under-age alcohol use.

Alcohol use by minors is a social and public health problem

In the United States, alcohol use contributes to more than 4,300 deaths among people below the age of 21, each year.

More than 90% of the alcohol consumed by those under the age of 21 is consumed by binge alcohol users. Alcohol use by minors is also strongly linked with:

The 2015 Youth Risk Behavior Surveillance System found that among high school students in the United States, 33% consumed alcohol and 18% binge used alcohol during the past 30 days.

Underage youth who consume alcohol are more likely to carry out or be the victim of a physical or sexual assault after alcohol intake compared to their peers who do not consume alcohol.

Alcohol use by minors is an economic problem

There were about 189,000 emergency department visits by people under the age of 21 for injuries and other conditions linked to alcohol in 2010 – burdening the healthcare system with massive costs.

Drinking by those below the age of 21 is strongly associated with alcohol-impaired driving.

For example, the 2015 Youth Risk Behavior Survey in the US, found that among high school students, during the past 30 days

Age restrictions can apply to the consumption of alcohol on-premise or off-premise.”

A 2012 overview shows that more countries have on-premise than off-premise MLPA regulations.

Among the countries that have legal purchase ages for alcohol, the ages range from 10 years to 25 years, but the most common age limit is 18 years: 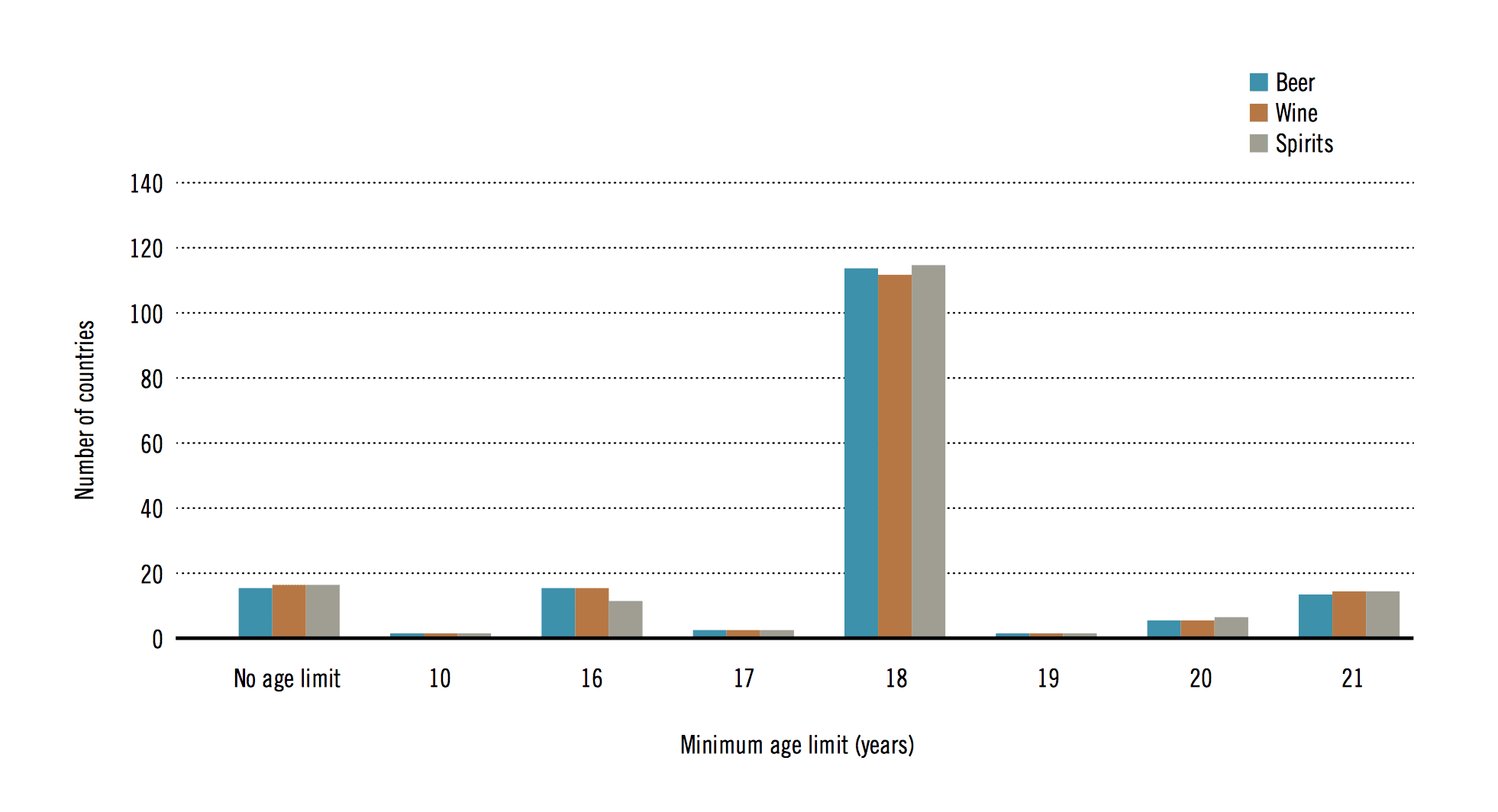 Almost all countries have some form of legal restrictions on the age at which young people are allowed to purchase or possess alcohol. These restrictions very considerably.

Evidence shows that changes in minimum legal purchasing laws can have substantial effects on youth alcohol use and related harms. 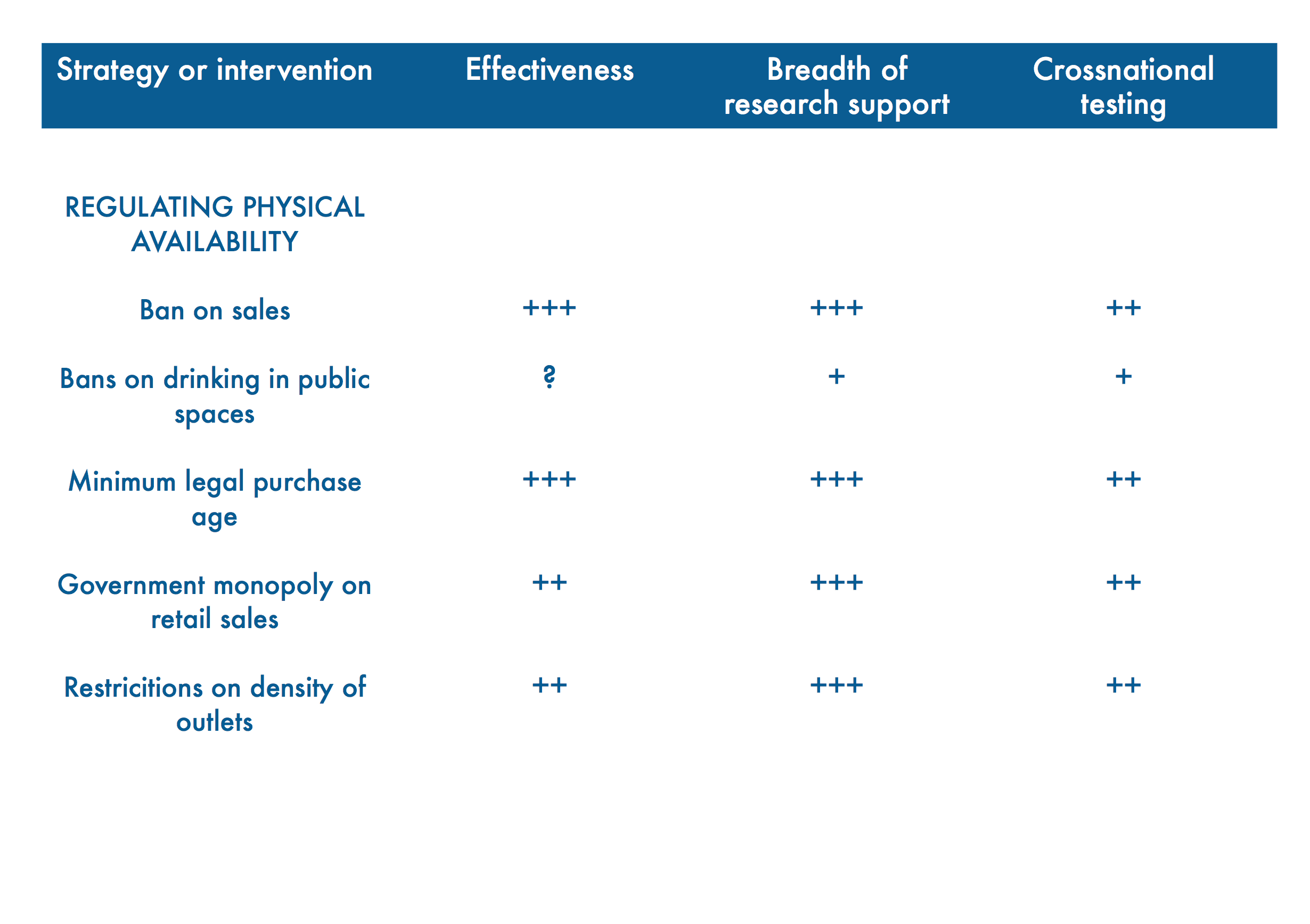 Comparing four years before and after the change, alcohol-involved traffic crashes among 20 to 24 year-olds (comparison group) grew substantially:

Minimum Legal Drinking Age (MLDA) laws specify the legal age when an individual can purchase or publicly consume alcoholic beverages. The MLDA in the United States is 21 years.

Prior to the enactment of the National Minimum Drinking Age Act of 1984, the legal age when alcohol could be purchased varied from state to state.

Evidence shows that the implementation of the uniform MLDA of 21 in the US reduced the overall prevalence of driving under the influence of alcohol. Additional studies have shown that changes in the minimum legal age are related to alcohol-related injury admissions to hospitals, injury fatalities and overall mortality.

The higher legal age had positive impact on lives saved, on reduction in alcohol use among adolescents, on better academic performance and on other alcohol-related problems.

Myth: Extreme alcohol use is worse in the United States

The alcohol industry perpetuates the myth that young Europeans are introduced to alcohol in a cultural context that reduces heavy and harmful alcohol use. Since the minimum legal purchase age in the United States is 21 – much higher than in most European countries – young people would miss out on the opportunity to “learn” to consuming alcohol responsibly.

This ill-informed belief and perception is employed as argument to lowering the minimum legal purchase age in the United States.

What the evidence says

Alcohol-related harm among US adolescents is lower compared to European peers.

The European School Survey Project on Alcohol and Other Drugs (ESPAD) provides European data on youth substance use and related harm.

The percentage of 15- and 16-year-old students in the United States who report alcohol consumption in the 30 days prior to the survey was 22%. That is less than half the average proportion in European countries, where the number is 48%.

Only Iceland had a lower prevalence of alcohol use in minors (9%) than the U.S.

The percentage of students who said they had five or more drinks on one or more occasions in the last month was 35%, on average, in Europe. The U.S. sample had 11%, clearly showing that binge alcohol use is a bigger problem across Europe than across the US.