Posted on June 20, 2015 in
Alcohol Industry, Alcohol's Harm To Others, Policy, Prevention

Recent alcohol consumption trends, across the population and among young people in particular, have shown that people are using alcohol less frequently compared with a decade ago. In fact, young adults (aged 16 to 24) are now as likely to be teetotal as adults over 65, after a jump in the proportion of young people who say they don’t use alcohol alcohol at all. Despite these positive news, negative trends continue to burden society in the United Kingdom…

Recent alcohol consumption trends, across the population and among young people in particular, have shown that people are using alcohol less frequently compared with a decade ago. In fact, young adults (aged 16 to 24) are now as likely to be teetotal as adults over 65, after a jump in the proportion of young people who say they don’t use alcohol alcohol at all.

Binge alcohol intake is also down dramatically among young adults in the United Kingdom, since 2005. 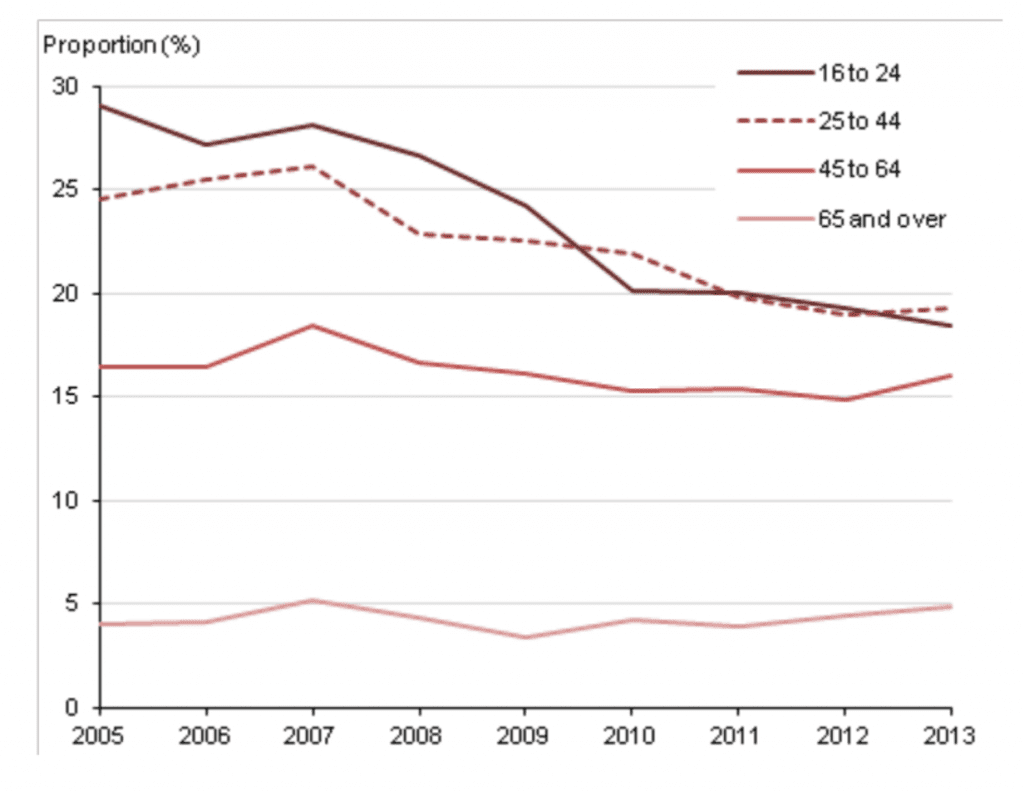 There are other positive trends:

However, it’s necessary to interpret average population figures as all positive. The overall alcohol consumption in Britain is very high, causing tremendous harm – economically, socially, and with regard to public health.

Britons over the age of 15 on average consume 11.6 litres of pure alcohol a year, according to the “Global status report on alcohol 2014”, almost dubble the global average. The average figure globally is 6.2 litres of pure alcohol per person per year. The report provides country profiles for alcohol consumption in the 194 WHO member states, looking at the resulting impact on public health and policy responses. 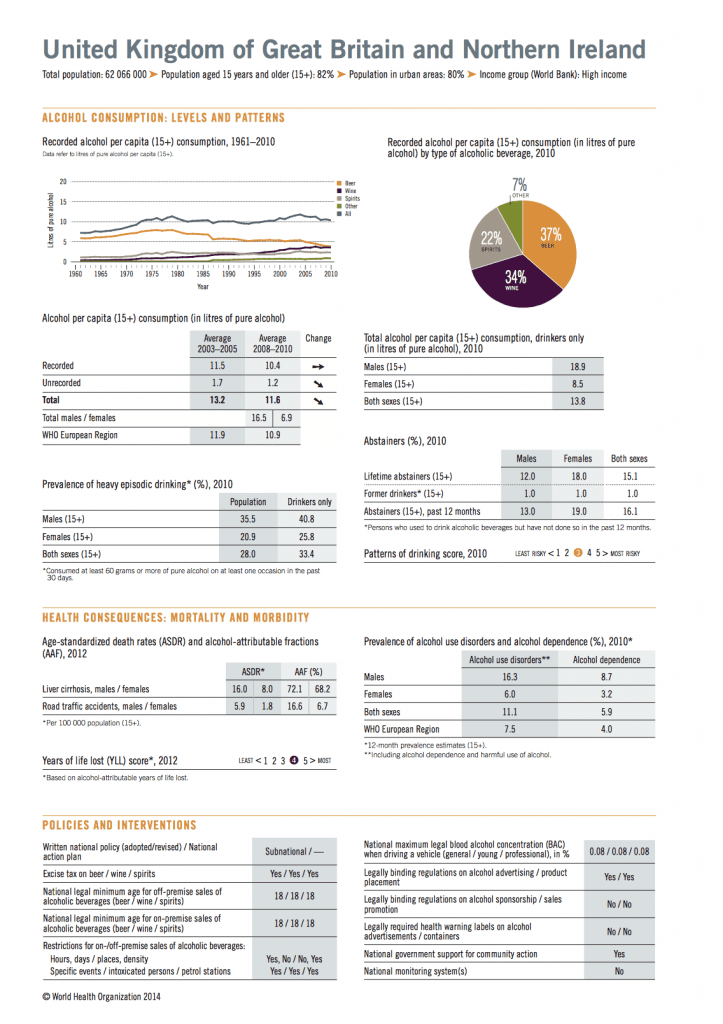 Despite some encouraging positive trends, there continue to be alarming alcohol trends in the United Kingdom. Still there are significant sections of the population whose alcohol use is causing enormous harm.

And the damage isn’t distributed equally. For instance, the most deprived fifth of the population suffers two to three times greater loss of life attributable to alcohol, compared with the least deprived.

The British government has claimed – controversially, since its dropping of Minimum Unit Pricing (MUP) and bowing to alcohol industry lobbyism – that it therefore has made the reduction of harmful use of alcohol one of Public Health England’s seven priorities. These are the reasons the government offers:

In England, over 9 million people, or 22% of the population (nearly 1 in 3 men but fewer than 1 in 6 women), consume alcohol at levels that increase the risk of harm to their health. So even if recent trends are going in the right direction, there are still far too many people whose alcohol intake habits put them at risk.

– There were more than one million alcohol-related hospital admissions in England in 2013/14. Alcohol is one of the leading risk factors for early death and disability and for men under the age of 60 it’s actually the biggest risk factor for death.

Alcohol is implicated in many diseases, including liver disease, some cancers, stroke and depression etc.

The impact of alcohol, though, goes beyond health. It carries a heavy financial burden: £3.5bn in direct costs to the NHS and £21bn to society.

Societal costs are heavy – from education to crime.

Another cause for concern is that the positive trends do mask a more complicated reality.

It’s true that alcohol consumption is decreasing, on average across the population, since 2005. But the numbers look a lot worse if a different time frame is considered. The chart below shows the more than doubling in units of alcohol consumed per person since the 1950s. And by including people in the overall consumption trends, who choose not to consume alcohol, the risk is considerable of under-appreciating how widespread harmful alcohol use in the UK is. 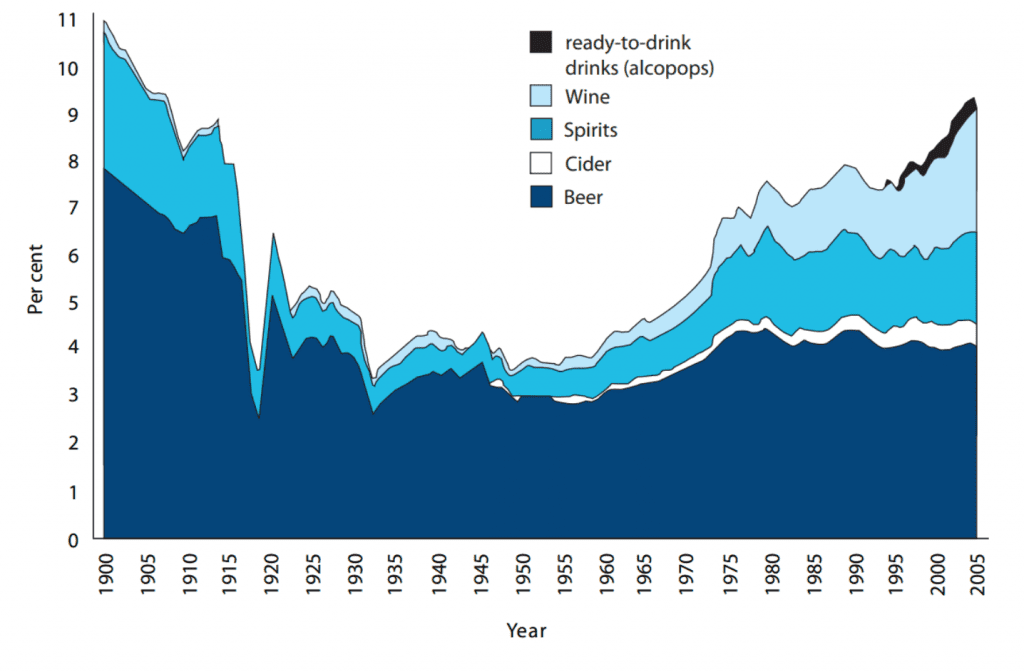 So among adults who had used alcohol in the last week, 55% of men and 53% of women consumed more than the lower-risk daily amounts in 2012. Furthermore, for conditions like liver disease, the statistics are alarming. The majority of deaths from liver disease are linked to alcohol consumption and the most deprived areas in England experience double the rate of deaths from chronic liver disease than the least deprived.

Since 1970, the death rate for this disease has risen by nearly 500% in patients under 65. This is particularly shocking given that mortality from other preventable diseases, such as heart disease, stroke and lung cancer, has been declining.

Alcohol harm in young people in the UK is alarming:

So there’s a compelling case for action. To be effective, actions need to target the alcohol harms themselves as well as the wider environment that gives rise to alcohol harm.

This wider environment includes complex and interrelated influences (social, legislative, economic and commercial) that shape people’s attitudes and behaviours towards alcohol. These provide many opportunities for change, but some interventions will have more impact at a national level, while others require a local context.

The affordability and availability of alcohol are key features of the alcohol environment. Both have increased over the long-term. Alcohol (as measured by a basket of alcohol products) was around 60% more affordable in 2013 compared with 1980.

Public Health England (PHE) continues to set out the evidence for the introduction of MUP for alcohol.

Alcohol has also become more widely available and this is an area where PHE is working with others, such as the Home Office and local authorities. There are examples across the UK – from Lambeth, Blackpool, Liverpool and Bury – where location-specific intelligence is helping to make the case for public health as a consideration in licensing decisions.

Population-wide measures are the cornerstone of primary prevention because they are most cost-effective and high-impact. Additionally, targeted interventions are also needed.

The evidence of what works is available. Alcohol Identification and Brief Advice (IBA) interventions, for example, are structured ways to deliver advice and help to people who are drinking above lower risk levels. Their effectiveness has been shown in trials and systematic reviews and their cost-effectiveness has been modelled.