US Elections: Call To Make Child Health Priority. Public calls on presidential candidates: Make children’s health a priority
In a nationally-representative survey of more than 2,000 adults across the US, children’s health concerns emerged as top policy priorities for this year’s candidates for President…

In a nationally-representative survey of more than 2,000 adults across the US, children’s health concerns emerged as top policy priorities for this year’s candidates for President.

In May 2016, U.S. adults were asked to identify the top three child health priorities they want to see presidential candidates address. 50% or more of adults selected the following issues:

The findings were released in a C.S. Mott Children’s National Poll on Children’s Health at the University of Michigan report.

Children’s health has not necessarily been a major topic in the primary season, but we know from our previous research in this arena that a majority of adults say that a candidate’s position on child health issues can affect their vote in November,” says Matthew M. Davis, M.D., M.A.P.P., director of the National Poll on Children’s Health and professor of pediatrics and internal medicine at C.S. Mott Children’s Hospital.

The public has a strong interest in improving children’s health and clearly wants their next president to share those priorities.”

A national sample of more than 2,000 adults selected their top three child health priorities for presidential candidates, from a list of eight child health concerns. The choices were based on prior research from the National Poll on Children’s Health about the public’s leading concerns about big health problems for children across the nation. The choices from each respondent were then aggregated to come up with a rank order of all the possible priorities.

We know that many Americans perceive children’s health being worse today than when they were kids, themselves. There is a strong sentiment among adults today that children face a lot of health challenges. That high level of concern translates into these priorities for the presidential candidates,” Davis says. 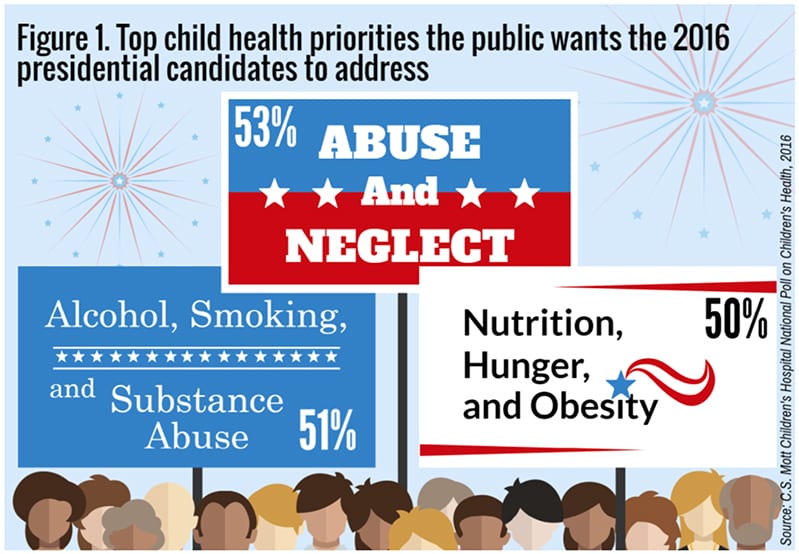 While presidential candidates face many competing demands and expectations for the policy positions they support in their campaigns, our findings suggest that focusing on child health priorities may resonate deeply with voters.”

What can a President do about these concerns?

The Mott poll report team identifies corresponding policy options for each of the most commonly identified priorities: