Among Singapore women, the lifetime prevalence of alcohol abuse increased from 1.2% of the population in 2010 to 1.7% in 2016, according to studies.A local study on alcohol consumption trends between 1992 and 2004 reports an increase in frequent alcohol use to be most pronounced among Singapore women aged 18 to 29. At the Institute of Mental Health’s National Addictions Management Service (Nams), the number of new patients with alcohol use disorders has gone up out of these patients 15% are reportedly women…

Among Singapore women, the lifetime prevalence of alcohol abuse increased from 1.2% of the population in 2010 to 1.7% in 2016, according to studies.

A local study on alcohol consumption trends reports an increase in frequent alcohol use to be most pronounced among Singapore women aged 18 to 29. At the Institute of Mental Health’s National Addictions Management Service (Nams), the number of new patients with alcohol use disorders has risen steadily – and out of these patients 15% are reportedly women.

The youngest patient seen at Nams was only 13 years old, depicting the extent of the problem and the reality that alcohol use disorders can affect minors as well.

A representative from AA Singapore reports while they have women only sessions and 30% of individuals seeking help are women, this figure is probably underestimated.

I don’t think fewer women have the problem than men. In Singapore, there are lots of cultural reasons why people don’t turn up for [AA] meetings. It can be particularly hard for women — they may be judged more harshly by society for their [alcohol use] problem,” said AA Singapore’s representative as per Malay Mail.

In Singapore, many people with alcohol use problems are seen as high functioning. They continue their work, and family life which further disguises the problem.

Alcohol harm is worse for women

A health crisis awaits when high alcohol use in women remains an under-recognised and under-detected problem.

According to Dr Guo, a senior consultant at Nams, while there is no difference in the diagnostic criteria for alcohol use disorders in men and women, women are generally more vulnerable to the adverse effects of alcohol than men and find it harder to quit.

He reports adverse effects can be physical or psychosocial, such as liver problems or sexual or physical abuse. Accordingly, women get intoxicated more easily than men when they consume the same amount of alcohol, due to differences in body structures and hormones and women who are addicted to alcohol have a higher prevalence of concurrent psychiatric disorders such as depression, anxiety or borderline personality disorder.

Along with income growth and social interactions, there are more chances to consume more alcohol, which many view as a recreational beverage. Alcohol use disorder may begin due to poor coping skills, peer influence and easy availability of alcohol. Having immediate family members with addictive disorders is also a risk factor for developing alcohol addiction. 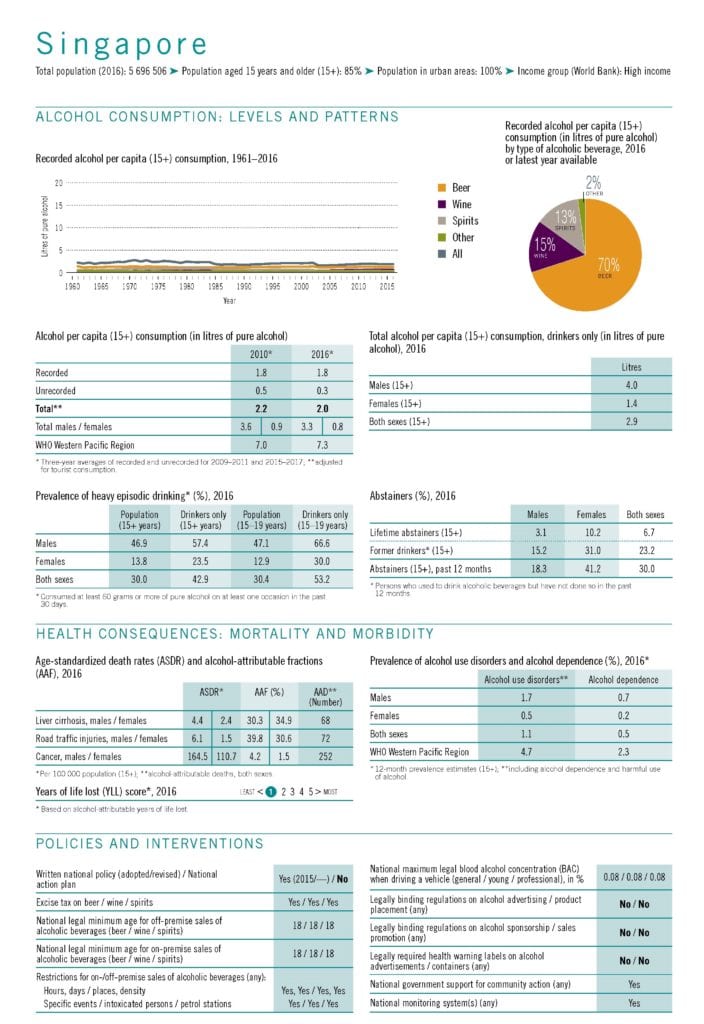 Singapore is performing well on several indicators for alcohol use, but a rise in alcohol use disorder among women signals clearly that more needs to be done in terms of prevention and treatment.

A serious problem can be observed in the binge alcohol use of youth between 15 to 19 years of whom over 50% youth engage in this harmful behavior. This is concerning as the country does have a minimum legal age for alcohol use of 18, meaning this law is not being implemented effectively.

Further strengthening of alcohol control policy and implementation of a national plan will benefit in better preventing and reducing alcohol harm, specially for youth and women in Singapore.